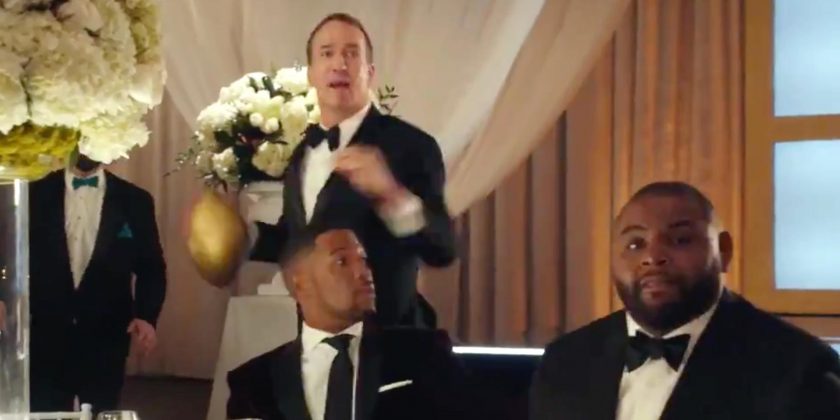 It’s the game of the century — suit and tie required!

In an action-packed commercial that aired just before halftime at Super Bowl LIII, the NFL’s biggest legends and most popular players gathered to celebrate the league’s 100th season in the spot aptly titled “The 100-Year Game.”

Despite wearing suits and being surrounded by elegant decor, the former and current players couldn’t help but let their competitive spirits take over.

From legends like Jim Brown and Joe Montana to current fan favorites Tom Brady and Odell Beckham Jr., the football lovers just had to get their hands on the gold football perched on top of a lavish cake.

It all began with Oakland Raiders running back Marshawn Lynch eyeing the dessert, and reaching over for just a taste of the icing. With a little tumble, the gold football fell onto the floor.

With all eyes on the ball, it was only a matter of time before former Chicago Bears player Mike Singletary yelled “Fumble!” That’s when things got out of hand.

Terry Bradshaw threw the football 40 yards and struck a chandelier and Peyton Manning hurled a pass and suffered a pain in his shoulder.

Brady even got in on the action — after removing his numerous Super Bowl rings, of course.

The commercial is meant to kickoff the league’s year-long campaign to celebrate the NFL’s centennial season. The spot featured more than 40 current and former NFL players, including 19 Hall of Famers, according to Yahoo! Sports.

Director Peter Berg told the site that it was both “emotional and satisfying” to watch the commercial, with the all-star cast, come together.

”What I found special as a football fan was to see Saquon Barkley and Odell (Beckham) and Todd Gurley talking to LaDainian Tomlinson and Jim Brown,” Berg told Yahoo! Sports. ”The young guys, middle age guys and older. To see Paul Warfield near Larry Csonka, talking to Barry Sanders.”

Super Bowl 53 is airing live from Atlanta on CBS.