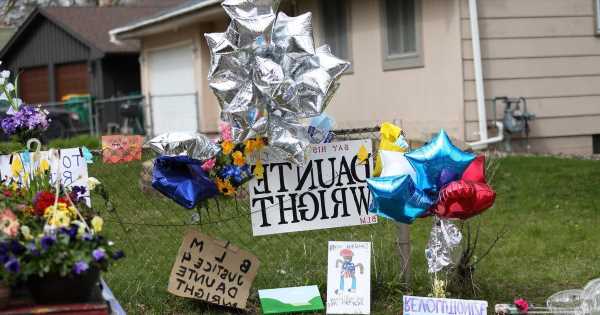 The funeral for Daunte Wright, the 20-year-old Black man who was shot and killed by a White police officer in suburban Minneapolis last week, will be held on Thursday. Reverend Al Sharpton will be delivering the eulogy at the funeral, which will be held in Minneapolis and will begin at noon local time.

Former Brooklyn Center police officer Kim Potter has been charged with second-degree manslaughter in the April 11 death of Wright. Potter was released from jail after posting a $100,000 bond.

Both Potter and police chief Tim Gannon have resigned from their positions.

How to watch Daunte Wright’s funeral

Police had stopped Wright for having expired tags and found that he had an outstanding warrant. As police tried to cuff him, Wright got back into his car. The former police chief said Potter thought she grabbed her Taser, but instead pulled her pistol, then fired the fatal shot.

Wright’s funeral is being held two days after a guilty verdict was reached in the murder trial of former Minneapolis police officer Derek Chauvin for the death of George Floyd, who was killed in the city last May. The verdict was read in a courthouse ringed with concrete barriers and razor wire and patrolled by the National Guard, as the community was on edge over both the trial and Wright’s killing.