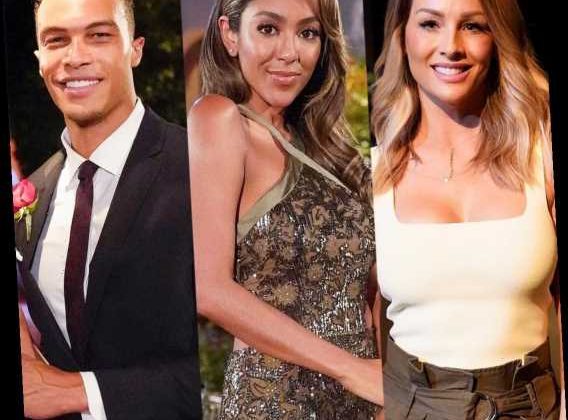 After fans watched Clare Crawley and Dale Moss get engaged on The Bachelorette, new lead Tayshia Adams appeared on Jimmy Kimmel Live! and answered some of his burning questions.

Tayshia Adams is ready to hand out some roses.

After fans watched Clare Crawley get engaged to Dale Moss on the Nov. 5 episode of The Bachelorette, Tayshia put months of rumors to rest and emerged as the new lead. She then appeared on Jimmy Kimmel Live! to tackle a few of the host's burning questions.

As viewers may recall, E! News confirmed in August that Tayshia would be replacing Clare after the hairstylist from Sacramento fell in love with one of her suitors. The Orange County podcast host was then photographed filming season 16 later that month.

So, when exactly did she take over the role? The 30-year-old star is remaining tight-lipped on that for now.

"To be honest with you, every day blurs in itself because of quarantine. I mean, am I right?" she said after being asked by Jimmy Kimmel. "Every day is the same day. So, I don't really know when that was, but it was some time during the summer."

Tayshia did say "they didn't share" the Clare and Dale news with her when she got the call and that she left just 48 hours later. Still, the timeline wasn't cleared up, and she wouldn't disclose how long she quarantined at the hotel where they filmed the show—simply saying "Honestly, too long."

Jimmy soon picked up on the number of times she said the word "honestly," which made him question whether the reality TV celeb was lying. "I feel like you're hiding something from me," he said. "I'm going to tell you: Honestly, we went into this interview, I didn't think you'd be hiding anything. Now, I don't know what's going on with you."

Rapper and Influencer Brax Dead at 21

How Mom Wrote Off Anna Faris

All the Details on Bachelorette Clare Crawley's Engagement Ring

Once Tayshia arrived on set, she moved into Clare's old room. In fact, she said she saged the place and "got some good juju in there." Again, this raised a few questions for Jimmy.

However, Tayshia set the record straight. "Oh, you're funny," she replied. "No, I didn't say any of that. Honestly."

After the interrogation, Jimmy, per tradition, shared who his wife, Molly McNearney, thinks the top suitors will be, listing off Ivan Hall, Ben Smith, Blake Moynes and Zac Clark as her final four predictions. Of course, fans will just have to tune in to see how Tayshia's journey to find love ends.

The Bachelorette airs Tuesdays at 8:00 p.m. ET on ABC.