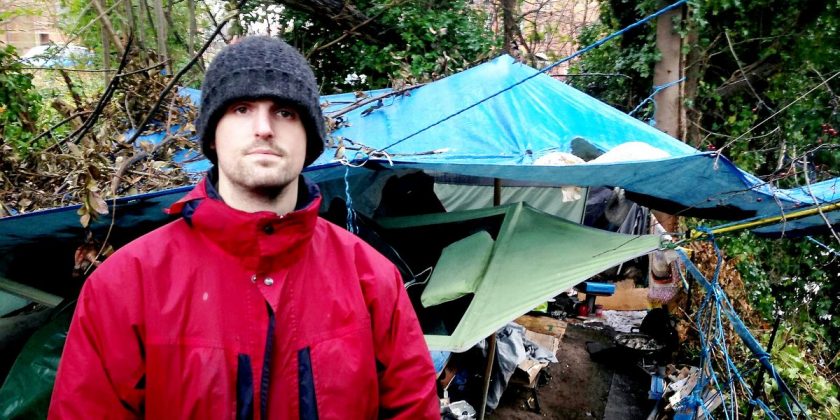 A war hero who fought in Afghanistan is now homeless and living in a makeshift shack on a river bank after he was diagnosed with PTSD.

The squaddie, known only as Jake, left the Army after struggling to cope with seeing pals blown up by bombs in Helmand Province.

The 27-year-old, who served for six years, moved into temporary accommodation but became homeless when his relationship broke down in the summer.

The former tank driver is now living with a group of other homeless people in a makeshift "tent town" in Worcester,where they gather round fires to stay warm in the freezing cold.

He said: "We are just trying to survive, it’s winter and it’s freezing cold.

We won’t be here forever.

"We don’t have parties or loud music, we keep ourselves to ourselves.

"We are stuck outside as there’s no emergency housing available – all the places have been taken up.

"We were staying in ‘tent town’ on the riverside but we were moved.

"We were sleeping in doorways in town and then we were moved on again.

"We try and keep the camp as clean as we can.

"We use a bucket to urinate in and we pour it down the drain.

"When we start fires we only use dead wood.

"We never cut down the trees and make sure the fires are done in a controlled pit for safety.

"The camp is fairly well camouflaged so we doubt that passers-by can see the site."

Jake has been in contact with military charities in a bid to find him more permanent accommodation but so far he has been unable to find a room.

Worcester City Council, which owns the land where the camp is, said: "We have been monitoring the rough sleepers on this site and intend to start proceedings shortly to move them on from this location.

"We are liaising closely with the police and local agencies that deal with rough sleepers to assess the welfare of the people on the site."