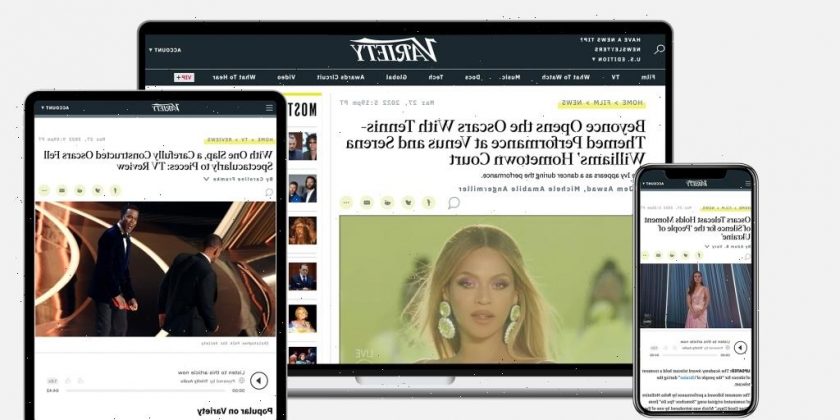 Variety.com, the digital arm of the legendary entertainment trade Variety, scored record-breaking traffic in March 2022. Some 36.9 million unique users visited the site in March, officially making it the biggest month in the brand’s history, according to Comscore.

Additionally, March was the seventh consecutive month that Variety placed No. 1 for readership among entertainment trades, beating Deadline and The Hollywood Reporter. And Variety‘s traffic for 2022 has topped other major Hollywood consumer news publications, putting the site ahead of Vanity Fair, Entertainment Weekly and Rolling Stone, as measured by unique visitors.

“Variety‘s incredible digital success can be attributed to the amazing teamwork of the entire editorial staff,” said Variety.com editor William Earl. “Through tenacious reporting, quick reaction to the news, deep industry knowledge and an ability to speak clearly to many different audiences who care about Hollywood, Variety is able to bring the business of entertainment to readers all over the world.”

March’s success was driven by industry-leading Oscars coverage, including reporting on Will Smith’s slap and the aftermath, and exclusives that had the whole world talking, including details on Netflix’s password-sharing crackdown; a same-sex kiss in Disney’s “Lightyear”; and the announcement of a controversial “Real Housewives” spinoff. In print, Variety — which became a weekly magazine after it was acquired by Penske Media Corp. in 2012 — featured a blockbuster cover story with the Kardashians timed to their new Hulu reality series, which also performed strongly online; an interview with “The Batman” director Matt Reeves; and “CODA’s” Troy Kotsur posing with his Oscar the morning after his historic win.

The online success comes in the wake of numerous industry awards presented to the Variety newsroom in recent months. In 2021, Variety won the Webby Award for best entertainment website.