Former prime minister Malcolm Turnbull says Rupert Murdoch’s News Corp poses a real threat to Australian democracy, claiming it has surpassed the Coalition or Labor as the most powerful political force in the country.

Mr Turnbull, who has blamed News Corp as a key player in his removal as prime minister in 2018, was unsparing in his criticism of the Murdoch empire in his evidence to a Senate inquiry into media diversity on Monday.

Giving evidence by video link, Mr Turnbull said the Murdoch media business had evolved into a powerful political force that, unlike political parties, was unaccountable to the Australian public. 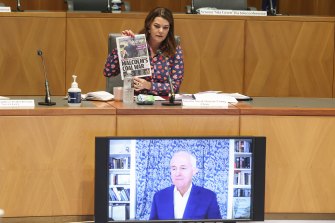 Commitee chair Senator Sarah Hanson-Young holds up a front page of the Daily Telegraph as she puts a question to former Prime Minister Malcolm Turnbull as he appears via videoconference during a hearing on media diversity in Australia at Parliament House in Canberra.Credit:Alex Ellinghausen

“This is the fundamental problem that we’re facing: the most powerful political actor in Australia is not the Liberal Party or the National Party or the Labor Party. It is News Corp. And it’s utterly unaccountable,” Mr Turnbull said.

“It’s controlled by an American family and their interests are no longer, if they ever were, coextensive with our own.”

Mr Turnbull, a Liberal, has joined former Labor prime minister Kevin Rudd as a strident critic of News Corp and has backed his push for a royal commission into the influence of the Murdoch media empire on the Australian media and political landscape. The media diversity inquiry, which is examining issues of media concentration in Australia, was established by the Senate after more than 500,000 people signed a petition by Mr Rudd voicing those concerns.

In his evidence to the inquiry in February, Mr Rudd said News Corp used systematic character assassinations to cultivate a culture of fear among politicians, and engaged in campaign journalism against issues such as action on climate change. At the same public hearing, News Corp Australia executive chairman Michael Miller dismissed Mr Rudd and Mr Turnbull’s criticisms as “a convenient diversion from their own failings” during his evidence.

Mr Turnbull echoed many of Mr Rudd’s concerns, saying he had experienced “bullying and standover tactics” from News Corp when he served in the Parliament.

He said the political might of the Murdoch empire represented “an absolute threat to our democracy” — a threat that he said America had already witnessed on January 6 when rioters stormed the US Capitol building. Mr Turnbull said the Murdoch-controlled Fox News had amplified the civil unrest that led to rioting, by promoting the lie that President Joe Biden had stolen the election from Donald Trump.

“If you don’t think that isn’t a threat to American democracy and undermining the strength and capability of our most important ally. Then, you know, you are kidding yourself,” Mr Turnbull said.

He also claimed that News Corp’s “problematic” influence was evident in its lobbying for the news media bargaining code laws, which forces Google and Facebook to compensate media companies for using their content on their platforms.

“The power that you represent — your parliament, our parliament — has been used to shakedown two big tech platforms, Google and Facebook, to give money to media companies, the leading protagonist of which was News Corp,” Mr Turnbull said.

Nine Entertainment Co, owner of this masthead, also heavily lobbied the government to pass the media code. The laws were supported by other major media outlets, including the ABC and Guardian Australia.

Nine is also a dominant player in Australian media, and owns The Sydney Morning Herald, The Age and The Australian Financial Review newspapers and a range of radio stations and television assets. The ABC is the third major player through television, radio and the nation’s most visited website.