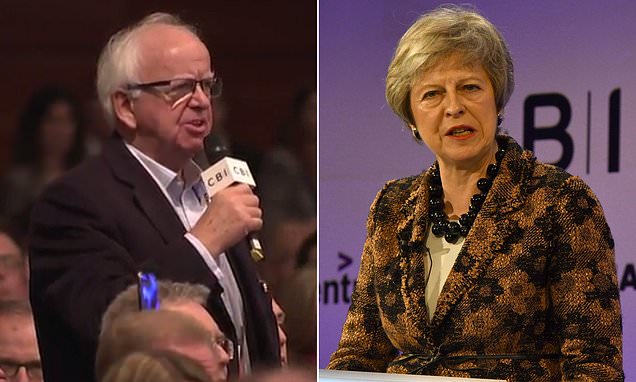 QUENTIN LETTS: Urged to ‘rip up’ her Brexit deal the PM finally shows some personality – a spark of irritation

OOPS. Three years ago, David Cameron was heckled by two Eurosceptic lads who had worked their way into the CBI conference and held up a banner saying ‘CBI – Voice of Brussels!’

Yesterday, Theresa May had her own tricky moment when a chap in the audience politely told her that her Brexit deal was dreadful.

The Prime Minister’s six-car motorcade, all whistle-shrieking motorcycle outriders and sirens, had sped down to London’s Docklands mid-morning.

I’m afraid by the time she got there I had hoovered up many of the mini-croissants. Baby, they were good. 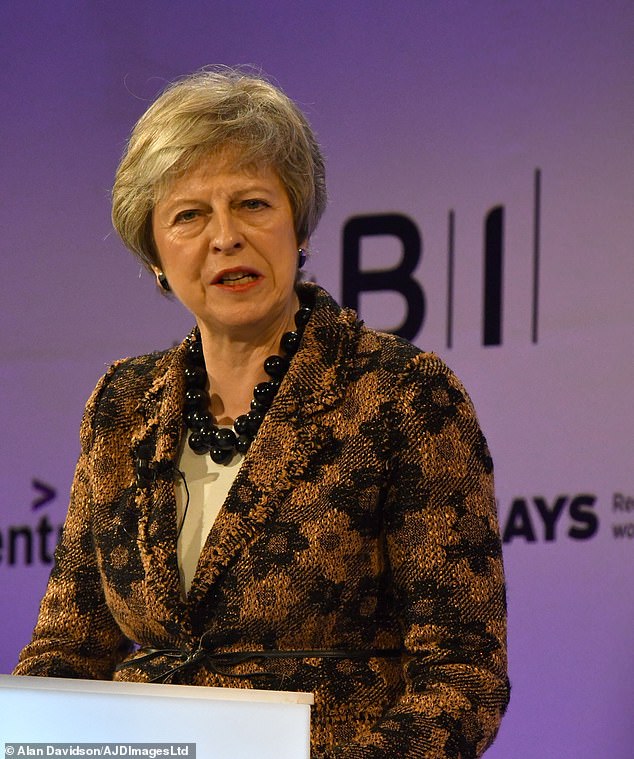 Say what you like about the CBI, their conference grub is ripping. Yesterday’s onion tartlets? Exquisite.

Mrs May made the morning’s main speech to the event’s 1,500 sleek schmoozers. For 15 minutes she spoke fast, rat-a-tat, about her Brexit deal.

It was bending far in their direction on frictionless trade that landed her in such trouble with Tory Brexiteers, so she must surely have felt she was among friends.

But then came questions from the floor.

The first was from a software fellow who gave his company a shameless plug. Mrs May dryly complimented him on his ‘advertisement’.

Then she pointed to the middle-back of the Aurora ballroom of the Intercontinental Hotel and invited a question from one of several souls who had a hand raised.

‘I’ll take Yellow One,’ she said (he was holding that paddle). 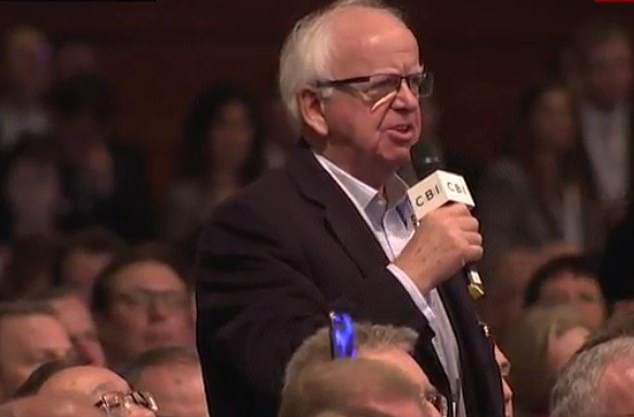 Yellow One might better have been called Red Mist One, a middle-aged gent who thought her deal was stinkeroo.

He begged her to ‘think again’ and to realise that the Europeans ‘don’t want us to be more competitive’.

For good measure, he added that the CBI was really ‘the Confederation of European Industry’.

There was ‘a rapidly growing market outside the EU, where we have huge opportunities,’ said the chap.

‘Those opportunities will be lost if you lock us into the EU regulatory framework.’

Oo-er. Silence. Around him, a certain amount of moist throat-clearing and squeezing of knees ensued.

Mrs May didn’t like his question. But that actually helped her a little, for at last we saw a spark of irritation – at last, some personality.

Until that point she had looked pretty beaten-up and puffy round the gills.

A headache on two pins. It did not help that she was wearing a jacket that seemed to have been cut from swirly carpet (much walked-over).

But the question from Yellow One reminded her that she needed to fight for this deal. 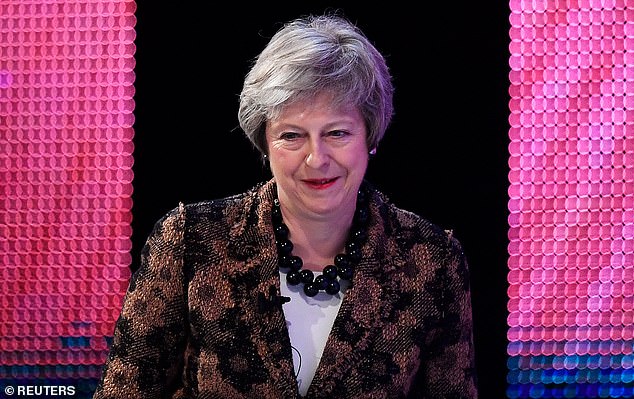 During the confederation another audience member told Mrs May: ‘Don’t just listen to politicians – listen to business’

With a pointed talon and some of that tell-tale head leaning – when angry, she drops her bean to the right – she imperiously told him his portrayal of the deal was ‘a little inaccurate’.

This won a stir of approval from the previously comatose room.

She insisted that Britain would be able to do foreign trade deals, despite what Yellow One claimed. Let’s hope she’s correct.

A CBI conference is Suitsville, power-dressed bods from the multinationals. These aren’t entrepreneurs or innovators.

They are MegaCorp’s club-class executives, waged networkers who didn’t get where they are today by being bold. Black Jaguars. Italian manbags.

Lots of palming of business cards. That’s a CBI shindig.

Their director-general, Carolyn Fairbairn, very much a Remainer, complained that Brexit was going to hit jobs.

Yet at the same time she argued for easier immigration so there would be no labour shortage. Those positions seemed a bit self-contradictory.

Dear lamb. Whatever gave him the idea she listens to politicians?

If only she did a little more, she might not have lost two Brexit secretaries.

At the end of the day the conference was given half an hour of raw Corbyn.

The Labour leader was sporting a pair of chunky-framed glasses. Rather Michael Caine.

He told them Labour would vote against Mrs May’s deal, might support another public vote, would repeal trade-union laws and that business should pay higher taxes.

They needed a few sherbets after that.