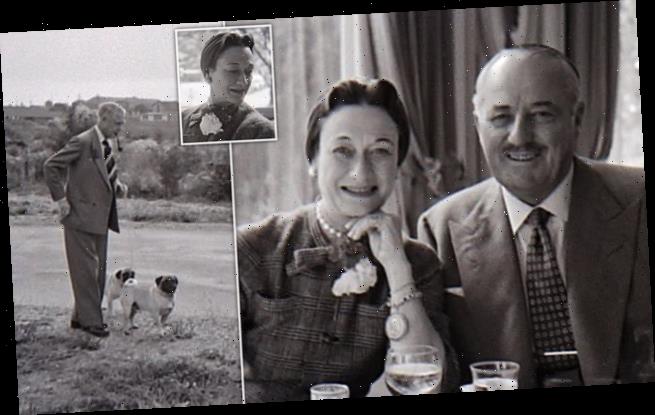 Candid unseen photos of Wallis Simpson and her ex-husband reveal their enduring closeness years after their divorce.

Wallis is seen smiling with American-born shipbroker Ernest Simpson during a visit to her and Edward VIII’s French country home in the mid-1950s, some 20 years after the abdication crisis.

Wallis had been married to Ernest, her second husband, for three years when she met Edward, then the Prince of Wales, in 1931.

She was in the process of divorcing Ernest when Edward announced his intention to marry his American lover, sparking a constitutional crisis that shook Britain. He abdicated in 1936 and married Wallis the following year.

Despite her affair, Wallis maintained a good relationship with her husband – as these photographs show.

One photograph, possibly taken by the Duke of Windsor, shows Wallis and Ernest sharing a light-hearted moment over lunch.  Another shows the Duke taking a pair of pugs for a walk along a river, which experts think might have been taken by his American wife. 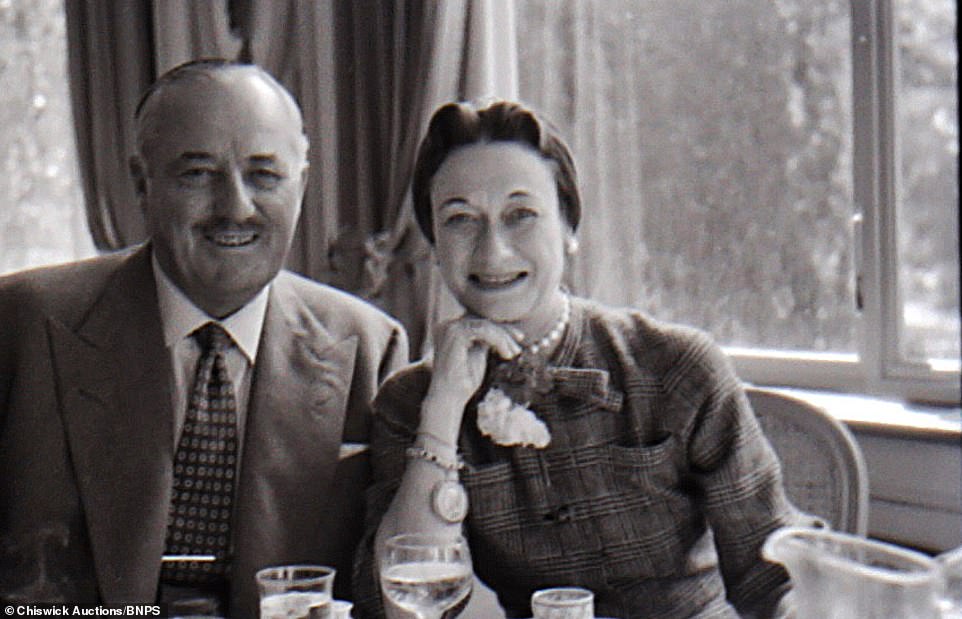 Unseen photos of Wallis Simpson and Edward VIII relaxing at their French country home are set to go up for auction. The photographs of the couple were taken during a visit by Wallis’ ex-husband, shipbroker Ernest Simpson, who is also pictured (above, with Wallis Simpson) 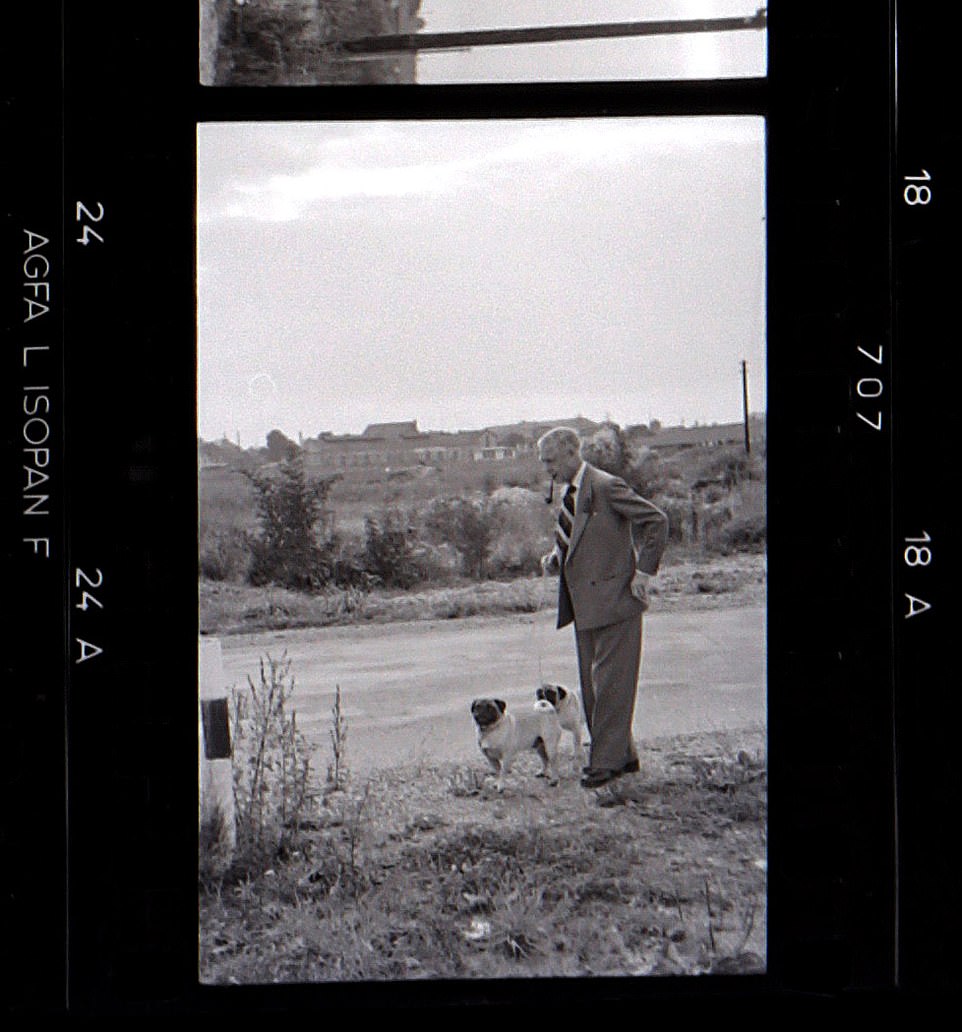 One photo shows the Duke taking a pair of pugs for a walk along a river, which experts think might have been taken by his American wife 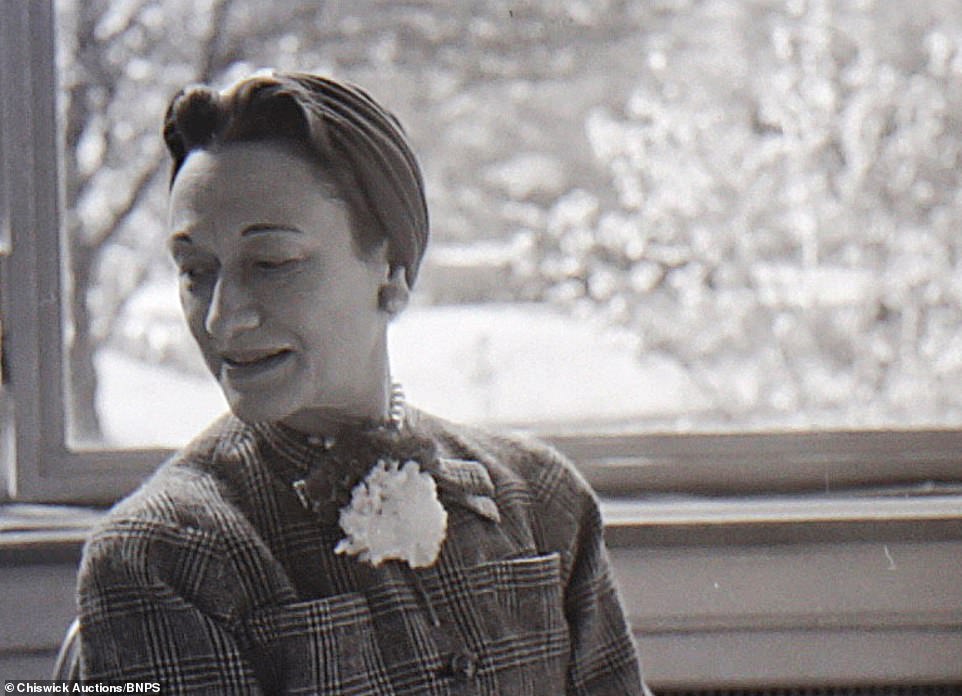 Photographs include this one of Wallis Simpson gazing away from the camera. Experts believe some of the photos might have been taken by Edward VIII

The photos are thought to have been taken between 1953-58 at Le Moulin de la Tuilerie, outside Paris, where the Duke of Windsor and Wallis Simpson lived in exile from 1952 until his death in 1972.

The photos all take the form of black and white negatives, measuring 1in x 1.5in.

They have been consigned for sale by a private collector who was given them by an elderly lady he met while studying photography at Lancaster and Morecambe College over 20 years ago. It is not known how and when she acquired them.

The negatives are expected to fetch £300 when auctioned next week at Chiswick Auctions, London.

Valentina Borghi, autographs specialist at Chiswick Auctions, said: ‘These photos have never been seen before and we believe they date from between 1953 and 1958. 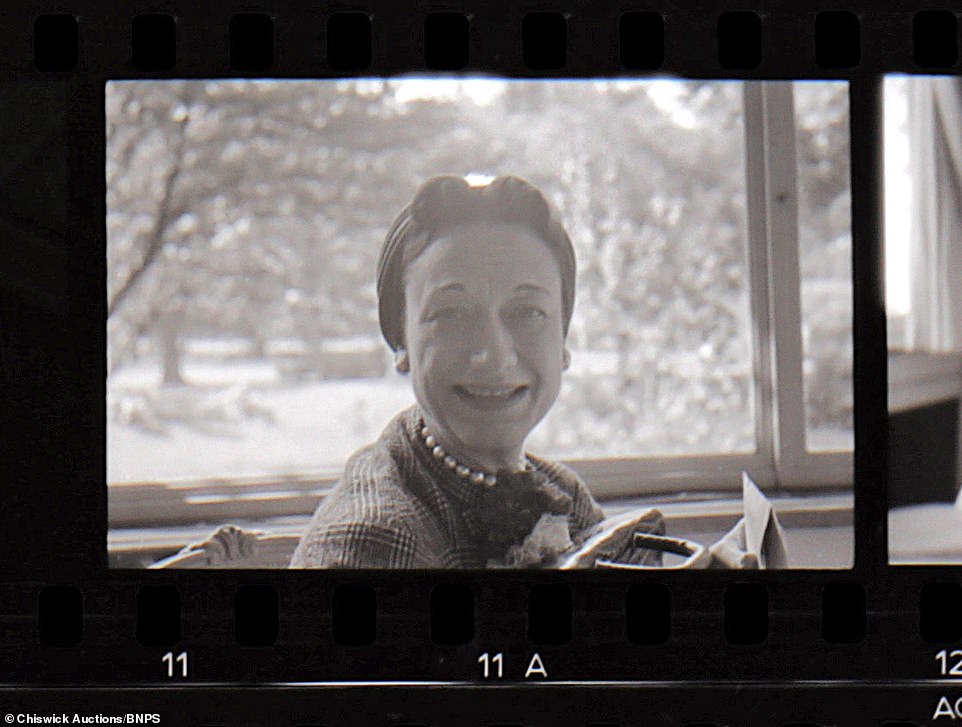 Wallis Simpson smiles for the camera in one of the photos, thought to have been taken at a restaurant during the visit. The couple lived in exile in France following the abdication 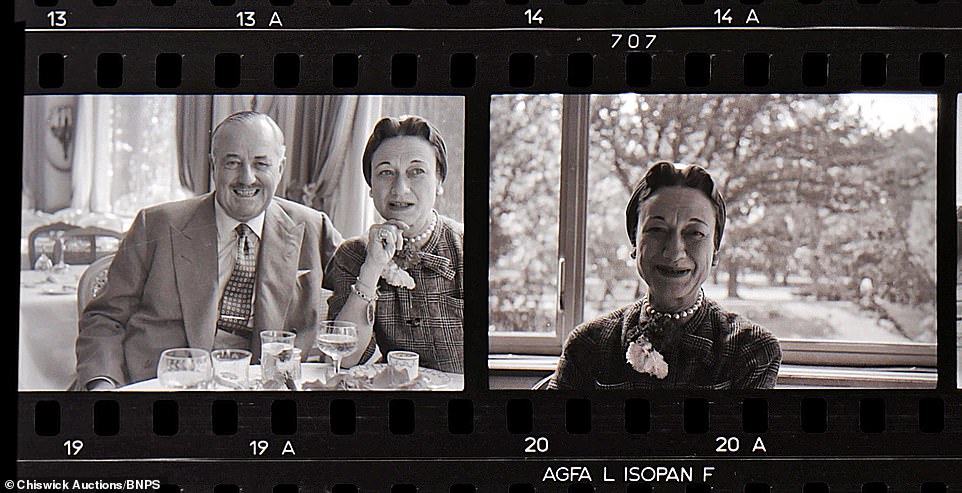 Wallis and Ernest, who divorced in 1936, are seen sharing a light-hearted moment in one photo, possibly taken by the Duke of Windsor himself 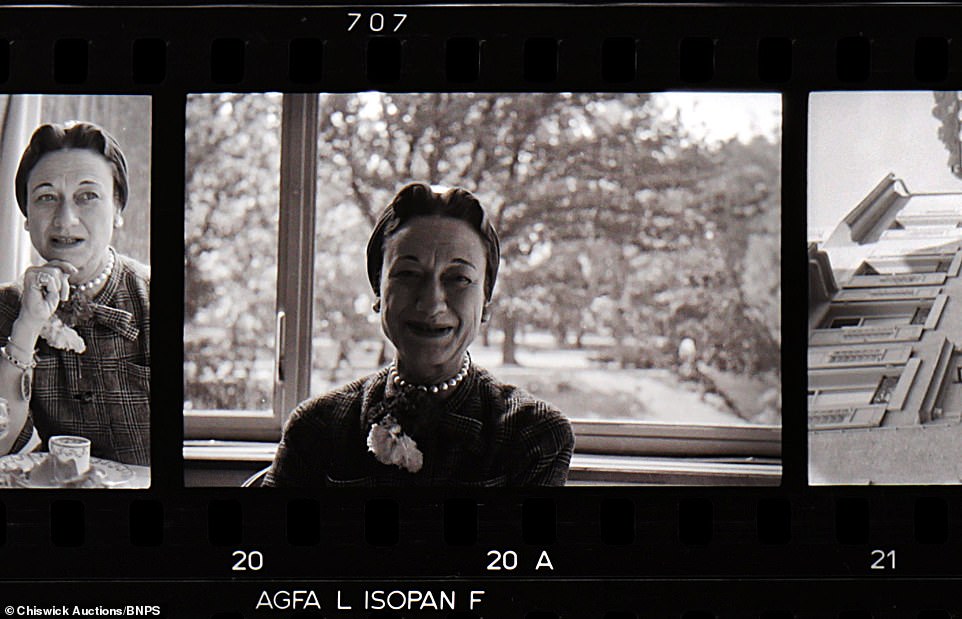 The photos all take the form of black and white negatives, measuring 1in x 1.5in, pictured

‘It is possible some were taken by the Duke himself and there is a photo of him walking the dog which may have been taken by Simpson. They are certainly not professional photos.

‘It is fascinating to get this glimpse into their private lives at a time when they were on the front page of every magazine in Europe and across the Atlantic.

‘There were similarities with the situation with Prince Harry and Meghan Markle today. 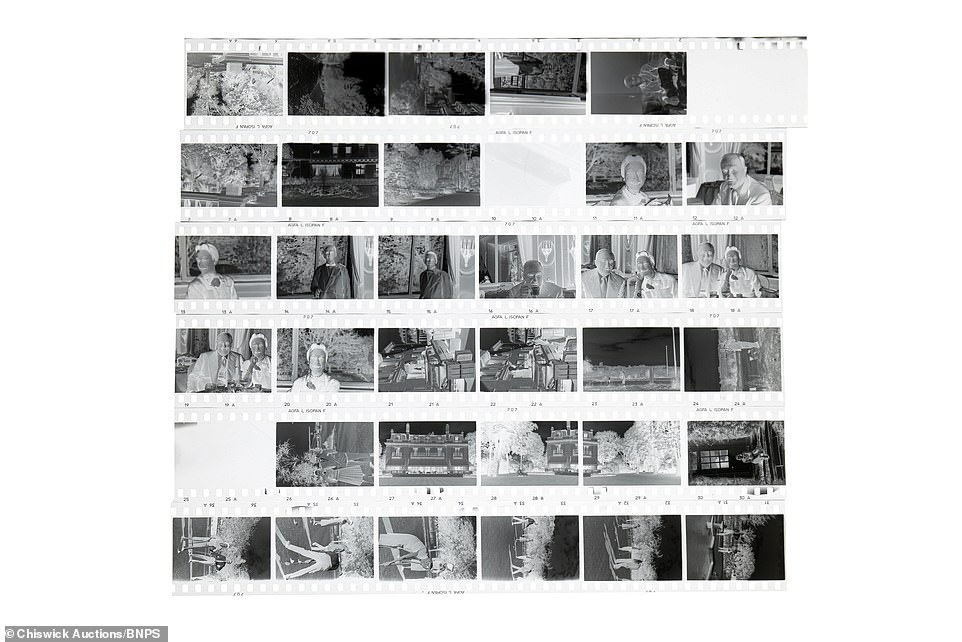 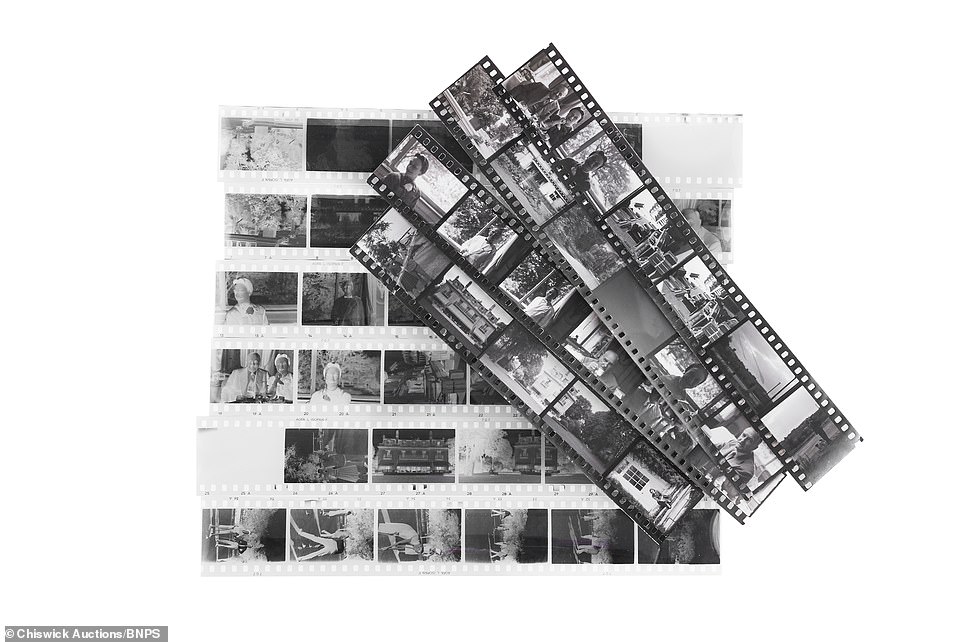 The negatives have been consigned for sale by a private collector who was given them by an elderly lady he met while studying photography at Lancaster and Morecambe College over 20 years ago. It is not known how and when she acquired them 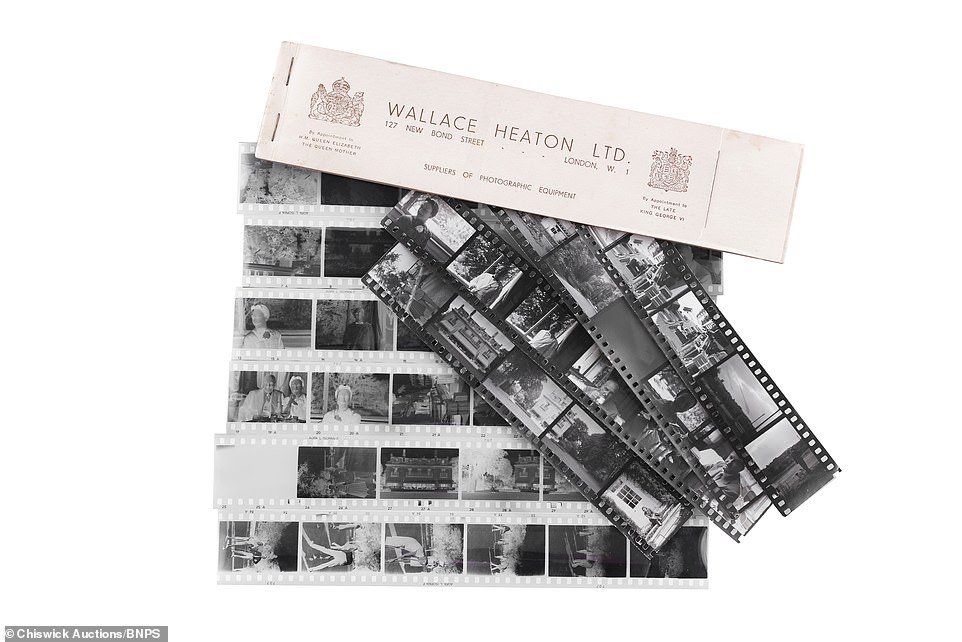 The negatives, pictured, offer a snapshot of the private lives of two of the most intriguing figures in royal history

Edward and Wallis: A scandal that rocked a nation

January 1931 – Wallis meets Prince Edward in January 1931, after being introduced via her friend Lady Furness

August 1934 – Wallis admits she and Edward are no longer just friends, after joining him on a cruise

January 1936 – King George V dies. Edward asks Wallis to watch the proclamation of his accession with him from St. James’s Palace

August 1936 – The pair enjoy a cruise around the Adriatic sea with friends. Details of their relationship appear in the American press

June 3, 1937 – The couple get married in the south of France. Wallis was formally known as the Duchess of Windsor, but was not allowed to share her husband’s title of ‘Royal Highness.’

‘Some photos feature a smiling Simpson with a gentleman we believe is her former husband Ernest Simpson.

‘They are said to have remained on good terms after the divorce.’

Edward’s relationship with Wallis, who had been twice married before her union with him, was a scandal when news first emerged of it.

His proposition to marry her – whilst divorce proceedings with her second husband were still ongoing – sparked a constitutional crisis which culminated in Edward’s decision to abdicate.

The relationship between the Duke of Windsor and Wallis Simpson has returned to headlines in recent weeks following Prince Harry and Meghan Markle’s bombshell interview.

The Duke’s abdication, which occurred in December 1936, rocked the monarchy and the country to its core – much as Harry and Meghan’s departure from royal life and subsequent revelations have done.

After getting his wish and marrying Wallis, in Tours, France, a year after he ceased to be King, Edward is said to have been prevented by his brother, King George VI, from returning to live in Britain.

The Duke of Windsor and Ms Simpson went on to give their own televised ‘tell-all’ interview.

Le Moulin de la Tuilerie, in the Chevreuse Valley, south west of Paris, was the only home the Duke of Windsor and his American divorcée wife ever owned together.

The couple bought the 26-acre, 38-bedroom estate in 1952 – 16 years after Edward VIII abdicated following a constitutional crisis over his marriage to Simpson.

The Duke of Windsor and Wallis entertained celebrities and politicians at the residence, including Elizabeth Taylor, Richard Burton and Marlene Dietrich.

Wallis Simpson was married to Ernest from 1928-1936. It was during her marriage that she met Edward VIII.

Following their divorce, Ernest remarried to Mary Raffray. He married for a fourth time to Avril Leveson-Gower in 1948, following Mary’s death the previous year. He died of throat cancer in 1958, aged 61. 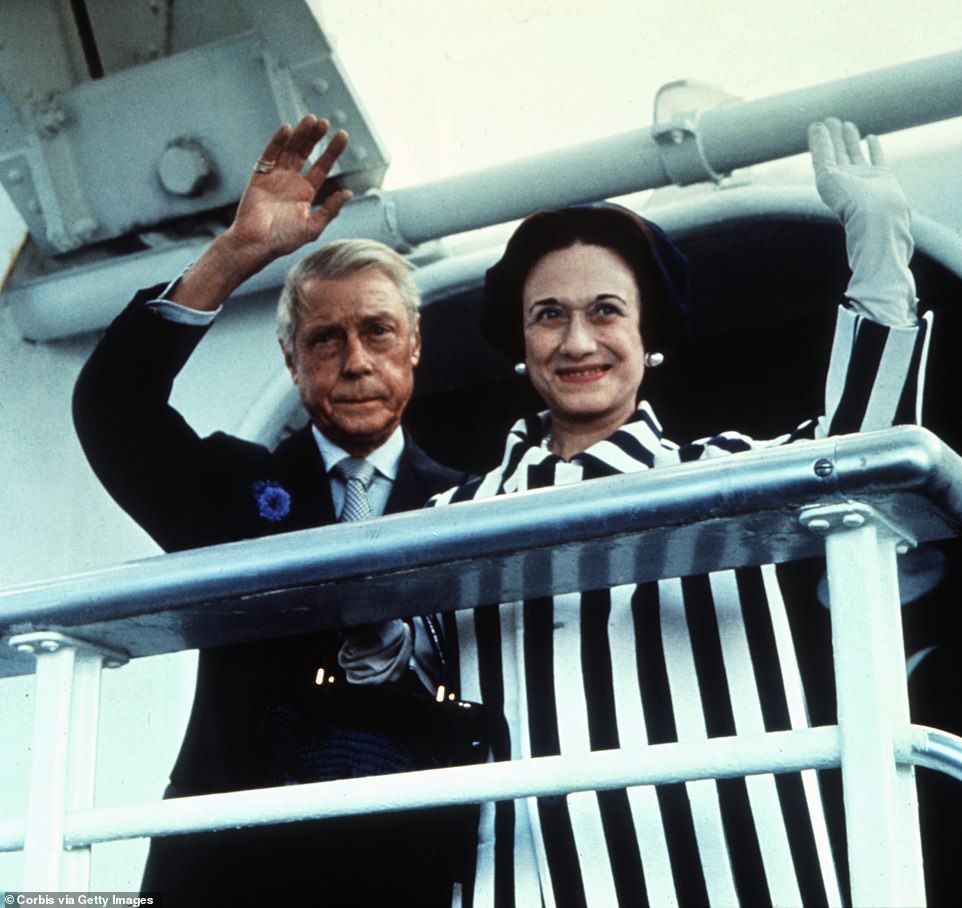 WHO WAS WALLIS SIMPSON AND HOW DID SHE SHAPE THE ROYAL FAMILY?

Born in 1896 in Pennsylvania, Wallis moved to London in 1931 after marrying her second husband, shipping executive Ernest Aldrich Simpson.

She struck up a friendship with Lady Thelma Furness who was the mistress of the then Prince of Wales.

Over the course of 1931, the Simpsons were gradually absorbed into Edward’s social life, spending frequent weekends with him at Fort Belvedere, his 18th-century home in the grounds of Windsor Great Park.

The turning-point in the friendship came in January 1934, when Thelma sailed off for a visit to the United States. According to Wallis, Thelma said laughingly, ‘I’m afraid the Prince is going to be lonely. Wallis, won’t you look after him?’

As the pair grew closer, he wooed Wallis with gifts of jewellery as well as money to buy clothes and other luxuries.

At Edward’s insistence, Wallis, wearing a tiara borrowed from Cartier, was formally presented to his parents, King George V and Queen Mary. The meeting, at which few words were exchanged, was not a success. 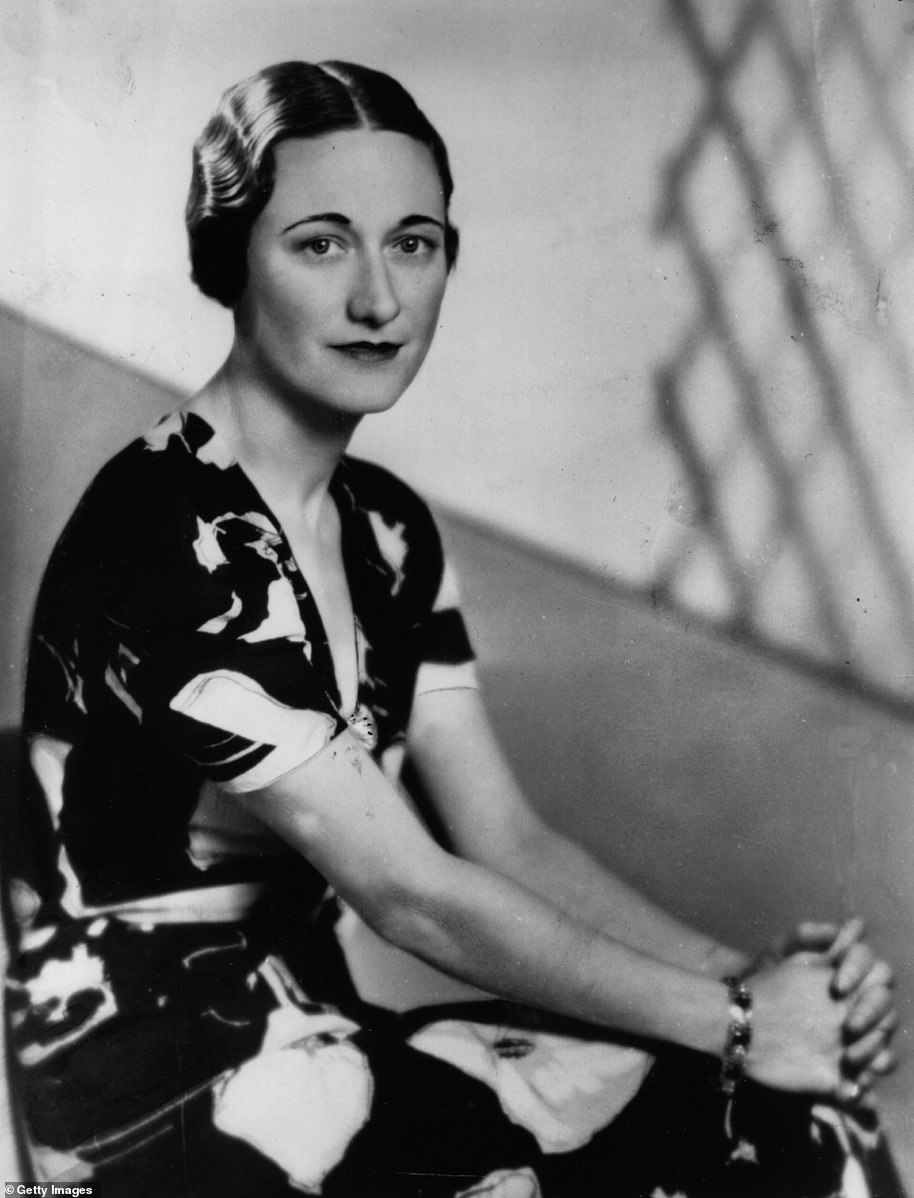 Born in 1896 in Pennsylvania, Wallis moved to London in 1931 after marrying her second husband, shipping executive Ernest Aldrich Simpson

Outraged to have to receive ‘that woman in my own house’, the King gave orders that Mrs Simpson was not to be invited to any of the Silver Jubilee functions being planned for the following year, nor to the Royal Enclosure at Ascot.

As news of the affair spread, the Duchess of York — later Elizabeth, the Queen Mother — declared openly that she would no longer meet Mrs Simpson and would beat a hasty retreat whenever ‘that woman’ walked into the same party.

In 1936 Edward ascended the throne after the death of his father George V. He made clear his intentions to marry Wallis as soon as her second divorce came through.

It caused a national scandal and the Church of England decreed he couldn’t marry a divorcee with two living former husbands.

Wallis went to live in exile in France to escape the pressure, and in December 1936 Edward abdicated so they could marry, assuming the lesser title of Duke of Windsor.

The King abdicated, signing off his brief reign with a broadcast that referred to ‘the woman I love’. 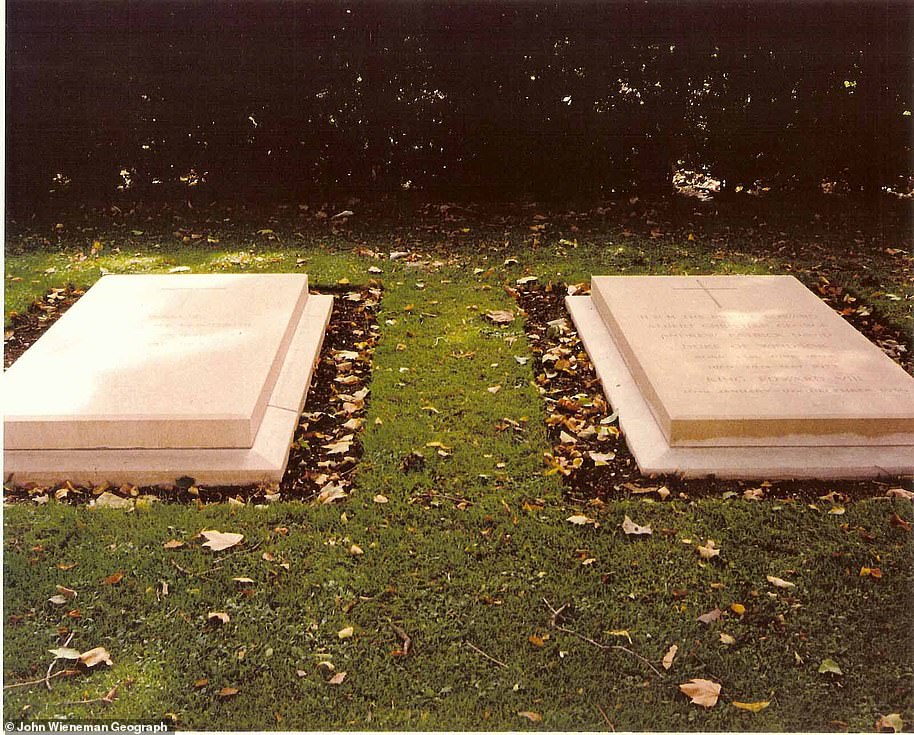 When the Duke died in 1972, Wallis became something of a recluse and was rarely seen in public before her death in 1986, at the age of 89. She was buried alongside her husband at the Royal Burial Ground at Frogmore House, Windsor

Simpson received abusive and hostile hate mail and was accused of being a Nazi sympathiser.

In 1937, she and Edward went to Germany to meet Hitler, before the atrocities of the Second World War, with her husband keen for her to experience the pomp and ceremony of a royal tour, denied to Wallis in England.

Edward become governor of The Bahamas between 1940 and 1945, and the couple lived out the rest of their days enjoying the life of high society figures.

However, she never lost her affection for Ernest Simpson, her beloved second husband and her friends and confidantes have since said that she never wanted to divorce him.

Significantly, she kept writing to him and these intimate letters, which have only come to light in recent years, reveal that Wallis was beset by fears and regrets over how her life had turned out.

When the Duke died in 1972, Wallis became something of a recluse and was rarely seen in public before her death in 1986, at the age of 89.

She was buried alongside her husband at the Royal Burial Ground at Frogmore House.

Frogmore Cottage, one of the properties in the grounds of the estate, is where Prince Harry and his wife Meghan Markle lived before they moved to California last year.