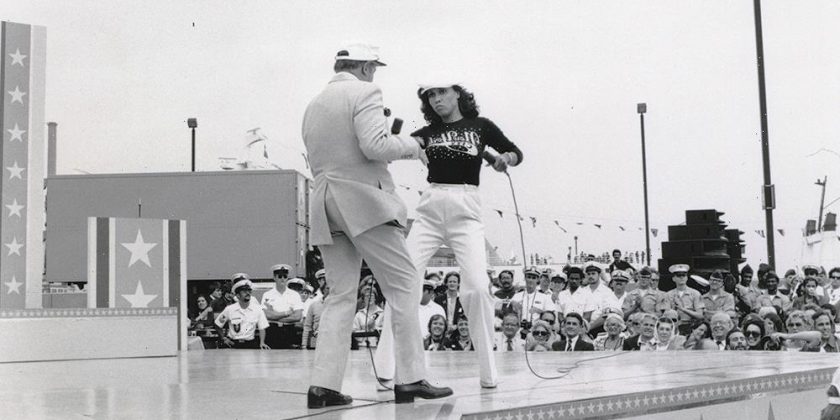 Commemorating its 80th anniversary this year, the United Service Organizations, or USO, provides support for personnel from the American military and its allies that extends far past the familiar images of entertainers including Bob Hope eliciting laughter from soldiers.

Launched in response to World War II, the civilian-run organization not only coordinates star-studded entertainment tours, but also provides a wide variety of programs, including care packages, communication access, networking events and a variety of other forms of support.

“The USO is there for them from the moment they step up and raise their right hand at a military processing station all the way through boot camp, when they deploy overseas, to when they get out,” says J.D. Crouch, USO CEO.

Crouch, who’s been with the organization for seven years, says there’s an enormous amount of continuity between the initial motivations to found it in early 1941 and what it does today. As the country geared up for war, President Franklin Roosevelt requested the creation of a program to provide “morale and recreation services” for millions of uprooted or otherwise displaced service men. “They would be going not just going overseas, they’d be going to parts of the country that they’d never been to before,” he explains. “You got New Yorkers down in Mississippi, and people from California in the desert somewhere. There were millions of young men and they were going to get disconnected from their communities and their families.”

Social reformer Mary Ingraham answered Roosevelt’s call, bringing together six civilian organizations (the Salvation Army, YMCA, Young Women’s Christian Assn., National Catholic Community Service, National Travelers Aid Assn. and the National Jewish Welfare Board) under the USO banner. “The USO’s role is really to keep them understanding that the country is behind them, and that the American people are behind them,” Crouch says.

After the USO’s first facility was built in DeRidder, La., more centers, clubs and canteens opened around the world to offer free coffee and donuts, social events including movies and dances, and correspondence services for soldiers with the impulse to write their loved ones, but not always the words.

Celebrities from across the entertainment industry soon joined in for what were called Camp Shows, or tours to raise morale — and money. Hope famously spent 48 Christmases overseas with American military personnel between 1941 and 1991, eventually being honored as the “first and only honorary veteran of the U.S. Armed Forces,” according to the USO.

Meanwhile, in addition to donating $100,000 to the organization, Edward G. Robinson became the first movie star to entertain the troops in Normandy, France, in 1944, and with more than 3,000 USO clubs open by the end of that same year, many more followed. Crouch says the recorded number of performances between 1941 and 1947 was approximately 428,000, to an audience of 200 million.
“The entertainment piece is important in that these are the people that so many Americans look up to and want to emulate, so it gives them that sense that they’re connected,” he says.

But Crouch says that connection goes the other way as well. “Those celebrities come back realizing a lot of different things,” he says. “One is the sacrifice that these young people are making. And they also really evince a real pride in the young Americans they meet because there’s a lot of people working hard together for a common goal, and it gives them a powerful charge.”

That’s certainly true for Wilmer Valderrama, who signed up for his first tour in 2006 to bring a “Yo Mamma” joke battle to troops stationed in Germany. “I was quickly humbled by not just the sacrifices, but the commitment our brothers and sisters have to our nation,” Valderrama says. “They are so selfless to devote a piece of their lives to ensure the freedoms we have today.”

The former “That ’70s Show” star says what began as a chance to bring humor to service men and women abroad became an opportunity to share his appreciation for their sacrifice.

“For me, there is so much value in these events as we’re able to bring a piece of home through love, laughs and entertainment. And they are an important reminder of what we’re fighting for — both abroad and at home.”

Comedian and television host Iliza Shlesinger first performed in 2012 as a part of chairman of the Joint Chiefs of Staff Martin Dempsey’s USO holiday tour. She says the experience immediately gave her a newfound appreciation for the differences between her responsibilities as a performer and celebrity, and theirs on a military base or battlefield.

“I did meet and greets — I call them petting zoos — at every base,” Shlesinger says. “I stood there for a couple of hours, and I just remember thinking, if I can’t stand here and smile and shake every single person’s hand, if that bothers me, what use am I to my country?”

Shlesinger also indicated that there were only a few rules the USO gave her to follow in her performances (“try not to talk about drugs, and try not to shit on the country”), but navigating around personal opinions about specific conflicts or the military in general is an easy task.

“First of all, you have to separate the people in our military from whatever you believe about what little you think you know about a mission,” she says. “And I’m very supportive of men and women who are unselfishly sacrificing their time with their loved ones and in many cases their lives so that we have the freedom to criticize whatever we want.”

Conversely, Crouch acknowledges that the organization has, throughout its existence, been affected by the politics of the time — whether those were larger attitudes about the wars soldiers may have been fighting, or more subtle cultural shifts.

“Some of the shows that you might’ve seen in Vietnam, you might have cheerleaders out there in what were considered acceptable cheerleader outfits in 1967 as opposed to today where that might not be acceptable.”

In fact, there have been many significant changes in the population and demographics of the military community, starting with its numbers: where there were once about 16 million people under arms, fewer than one-tenth of that number now serve in active duty, with 440,000 more in the National Guard. Fifteen percent of the military is female now. In general, and as opposed to the young men who enlisted in decades past, typical service members today are married
with a family.

This has forced the USO to adopt new methods and develop programs to meet their ever-
changing list of needs. Some are technological, such as offering basic Wi-Fi at their centers for correspondence with family and friends back home. Virtual programming was implemented in response to the pandemic, and over the past 18 months it’s become an especially effective way to present amusement and information to troops, and generate personal connections when entertainers want to volunteer but cannot travel.

“We’d set up an opportunity for a Q&A discussion with Scarlett Johansson and Chris Evans, or we’d bring Eli Manning in or Drew Carey or Charlize Theron,” he says. “They would do something and then there would be an opportunity to interact with them directly. So it’s not like just watching a YouTube video, it’s a real connection that’s made.”

Other services offer more attitudinal, even existential support. For the 220,000 service members that exit the military each year, for example, the USO created its Pathfinder Transition program, which helps them translate skills developed in the military to private sector jobs.

“They are asked to do things that have no analog in civilian life. What’s the analog for heavy machine gunner?” Crouch asks. “It’s designed to really help service members and their spouses find good employment to take advantage of their educational benefits, so that they have a really good foot forward as they come back into civilian life.”

After eight decades and a lot of changes, both within the organization itself and the world around it, the USO remains steadfast in its commitment to our soldiers not just by uplifting them from their circumstances, but by truly trying to understand their needs — and filling them. “What’s the central challenge of military life?” Crouch asks rhetorically. “Oftentimes people will say, fear of battle or something like that. But it’s feeling separated.

“The USO’s role is really to keep them understanding that the American people are behind them. The way we do it, the technology we use, the various needs of service members? All that has changed. But the basic message is the same. And that notion of connecting people goes back to the first days of the organization.”