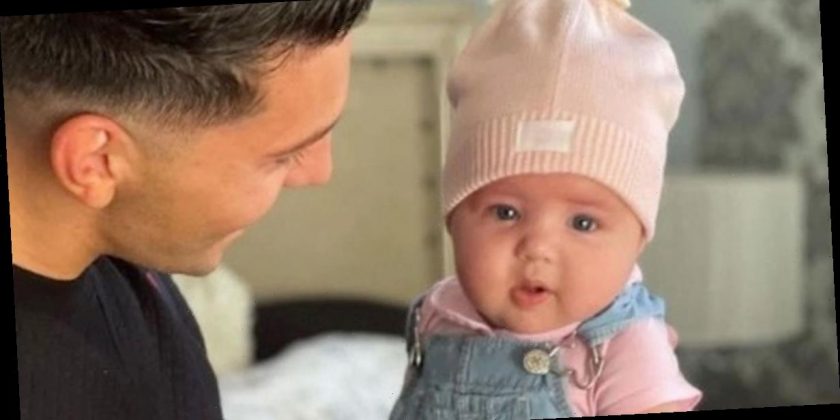 One of the UK’s first gay dads was delighted to welcome a “beautiful baby girl” into the world in September.

And the pair, who used a surrogate, have been doting on the tot ever since.

Valeria is also fussed over by Barrie’s 21-year-old daughter Saffron and has her own designer wardrobe.

The dad, who is currently engaged to Scott, told Fabulous : "She has several pair of Ugg boots and many Burberry, Gucci, Louis Vuitton and Versace already.

Millionaire Barrie, who is from Manchester but lives in Florida, added: "Saffron buys her Gucci socks and won't let me put anything else on her”.

The young woman is so smitten with her half sister that she wants to help her dad have more kids in the future.

She told Closer magazine: "I love Valentina, and I want to donate my eggs to help Daddy and Scott have more children.

"I've already frozen my eggs for them, so Daddy and Scott just have to say the word."

Want to read more about the Drewitt-Barlows? We’ve got you covered.

Back in 1999, Barrie became one of the UK’s first gay dads in a same-sex couple with then partner Tony.

He split with Tony after 32 years of marriage and Barrie is now dating his 20-year-old daughter Saffron’s ex-boyfriend Scott.

Saffron briefly dated bisexual Scott, 25, months before he fell deeply in love with 55-year-old Barrie and the pair have been together for a year.

Despite Scott and Barrie meeting through Saffron, she has given her blessing to their relationship as long as they are "happy."

Ex Tony and Barrie had been living in the same £6 million home in Florida, US, together but is "delighted" at the new additions to their "very modern family”.

Saffron is currently living with both her dads, ex Scott, four of her brothers and baby Valentina in the 10 bedroom property.