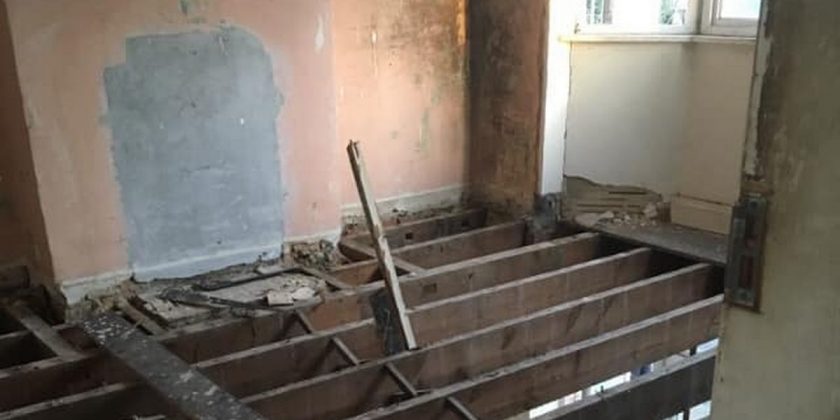 Few things are as satisfying as making a house a home . Sadly, few things can end up being quite as costly – and painful.

When it comes to home improvements , many of us prefer to go down the DIY route. However, as these lot show, sometimes outsourcing to professionals is money well spent – and disaster averted.

Because, no matter how much of a Handy Andy you consider yourself to be, many efforts end in chaos.

According to research carried out by Burton Roofing , the latest data from NHS Digital shows that 4% of all hospital admissions are caused by DIY debacles. Not only that, but the ONS have estimated that each household is spending £1,150.24 a year on these DIY projects. So in celebration of the brave people who decided to do it themselves anyway, here are some of the best DIY disasters.

1. What goes up must come down

When Donna Newbury’s husband tried to hang up their sparkly new light fitting above the TV, little did he know that moments later it would come crashing down, taking out both the TV and the glass cabinet in the process.

Top tip: Move all delicate (and expensive) items out of the way before you start your DIY.

What's wrong with this image?

OK, we'll tell you. Suzanne Walton decided she didn’t need a decorator to help her put up her trendy brick-inspired wallpaper. With hindsight though, a tape measure could have helped the slightly trippy, wonky brick effect.

Kate Turner’s husband thought he had accomplished great things when he carried out a DIY ceiling repair using a bit of old ply board and some white gauze.

Unfortunately, his family don’t feel the same and are terrified for it to come crashing down onto their dining table. RSVP 'yes' for dinner at your own peril.

It's not always easy to estimate just how big a hole we need to make to be able to carry out the task in hand.

On this occasion we think it's safe to say that Kerry Copp Champman’s partner erred on the side of caution when he went to investigate the pipes above their boiler! Let's hope he is better at filling in holes than he is at making them.

When Alex Byford-Scott bought her first house she dreamt of creating her perfect, dream master bedroom.

Have you had a huge DIY fail – or triumph? We'd love to hear about it! Email [email protected]

Unfortunately, her dreams turned into a nightmare when she discovered a giant rat family living behind the fitted wardrobes. This meant that all the ceilings had to come down and floors had to be taken up to get rid of her unwanted visitors.

6. The kitchen is the heart of the home

When Dawn Kumar was promised a new bespoke kitchen, this wasn't exactly what she had in mind. While it is bespoke in a loose sense, it's porbably not kind of bespoke that you're after!

Caroline Tinsley was really impressed with her new floral wallpaper that looked beautiful in her cosy bedroom. That was until her chimney leaked and the wallpaper turned a nasty shade of yellow and peeled off piece by piece.

Now it's not looking quite so blooming good. To make things worse, the toilet set was discontinued, meaning a painful two-month-long search to find a replacement.

9. When the sky comes caving in on you

This scenario became a painful reality for Amanda Wilde when her kitchen ceiling gave up hope and decided to crash down onto the floor.

Luckily, she managed to dodge it in time but the mess and the cost was considerable.

Lindsey was looking forward to the satisfaction of plumbing in her own washing machine to the newly fitted utility room. However, she failed to read the part of the manual where it told her to release the bolts holding the drum inside and also to securely connect the hoses that attached the machine to the water mains.

The outcome – a huge flood, damaged units, fried electrics and a call out for the Fire Brigade!