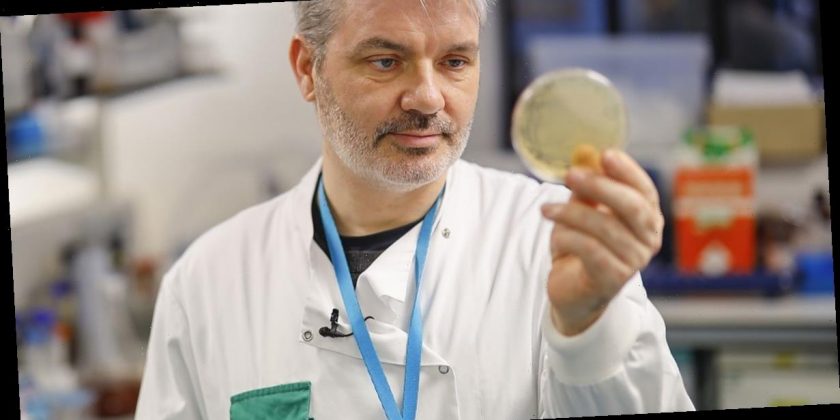 Scientists around the world are working together in the race to find a coronavirus vaccine although it is feared it could take at least a year.

Researchers at Imperial College London and Oxford and Cam­­bridge universities are among the experts toiling around the clock.

Imperial have prototypes in early trials and will move to human trials as early as next month.

The college’s Prof Robin Shattock said: “We have the technology to generate a vaccine with a speed that’s never been realised before.

“Most vaccines take five years in the discovery phase and at least one to two years to manufacture and get into clinical trials.

“We are trying to short-track that and we may not be the first – it requires only one group to get there.”

In America, Seattle biotech firm Moderna is recruiting 45 volunteers to test its experimental vaccine and in Pennsylvania Inovio is developing a DNA-based vac­­cine, producing 3,000 doses for trials next month.

In India, Zydus Cadila aims to manipulate a measles virus to produce antibodies against corona while in China four teams are using immune-activating technology from a Florida firm.

Denmark’s Expres2ion is using insect cells to tackle the problem while researchers in Queensland, Aus­­tralia, are using a “molecular clamp”.

He announ­­­ced the fund­ing during a tour of the Mol­­ogic lab in Bed­­fordshire which is working on a quick and cheap way to diagnose patients.

In a statement he said: “Keeping people safe is my number one priority and that’s why I’ve set out our four-part plan to contain, delay, mitigate and research coronavirus.

“We are ensuring the country is prepared for the current outbreak, guided by the science at every stage.

But we also need to invest in researching the vaccines that could prevent future outbreaks.

“I’m very proud that UK experts – backed by Government funding – are on the front line of global efforts to do just that.”

Speaking to reporters, Mr Johnson added: “What we are announcing today is a £46million package of investment which will in time deliver a vaccine – some say in about a year – but also help us to have rapid test kits that anyone can use quickly to tell whether they have coronavirus.”

The PM warned of a “substantial period of disruption”. Asked what help would be given to struggling firms, he said next week’s budget presented “a big opportunity”.

Scientists have learned lessons from previous virus outbreaks – such as the 2002 Sars crisis – and already had a game plan when the full gravity of corona emerged.

Within days of the outbreak in China a genetic blueprint of the virus was put online using samples from early patients. It provided a road map for scientists around the world to create a vaccine.

This kind of research is usually highly competitive and secretive.

In the past, medical journals would only publish research which was exclusive.

But with this outbreak they have promised that sharing data online will not hinder later publication.

As a consequence dozens of teams around the world are collaborating in a way never before seen.

For decades, the main way of creating a vaccine has been by using the original virus.

The measles, mumps and rubella vaccine, for example, uses weakened versions of those bugs.

But work on coronavirus uses newer, faster approaches including lifting small sections of the virus’s genetic code and putting them into other, harmless, infections.

Oxford University is using a technique it was already working on to combat Mers.

Other experts are pinning their hopes on repurposing drugs used to fight HIV and malaria which have already gone through safety checks.

Remdesivir, used against Ebola, is also being tested. Moderna’s Seattle project is being work­­ed on by 100 people.

Boss Richard Hatchett said: “After our call for proposals in February we had 48 applications from all over the world.

“There is a real urgency because the threat is unprecedented in 100 years.”

Even so, creating a vaccine remains a lengthy process due to the cost and labour, plus the need for testing.

It took years to develop a vaccine for Ebola, which killed more than 11,000 in West Africa just over a decade ago.

Experts believe a viable coronavirus vaccine is a year to 18 months away, which may sound a long time but would in fact be a new record.

Government chief scientific adviser Sir Patrick Vallance told Radio 4: “I don’t think we will get the vaccine for this outbreak but it’s not unreasonable to assume we will end up with a vaccine in a year or 18 months.

"A few years ago it would have taken 20 years.”

While it is hoped the virus will peter out for good, if it proves to be seasonal like flu, a viable vaccine could prove crucial when another wave strikes.