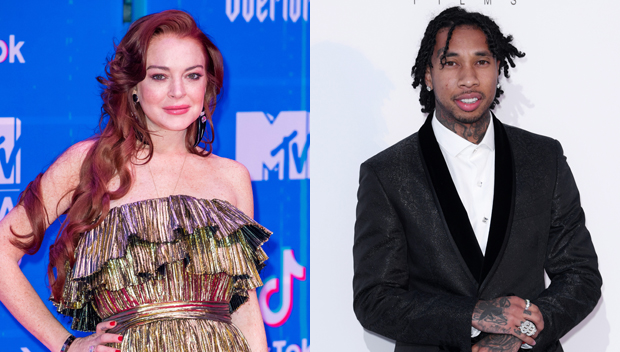 Tyga definitely noticed Lindsay Lohan’s recent flirty headline-making comment on his Instagram and he’s been happy to take in the attention from her.

Tyga, 29, doesn’t seem to mind the attention he’s been getting from Lindsay Lohan, 32, through her eye-catching Instagram comments and in fact, he is “flattered” by the whole situation. The actress recently made headlines when she commented “Taste” on one of his pics that showed him shirtless in bed and fans went crazy. “Tyga was flattered by Lindsay‘s comment, but wasn’t sure if she was joking or not,” a source close to the rapper EXCLUSIVELY told HollywoodLife. “Tyga laughed when he first read it because he thought Lindsay was just messing around. It’s hard for him to take anything Lindsay does, or says, seriously because of her party girl reputation.”

Despite feeling flattered, it seems Tyga is not looking at Lindsay as any sort of romantic partner. “Tyga has a very specific type, and he’s just not interested in Lindsay in any romantic way,” the source continued. “He doesn’t think she’s unattractive, but she’s not the type of girl he would want to be in a relationship with. Right now he’s enjoying the single life and is just focused on celebrating his huge birthday bash surrounded by friends.”

In addition to Tyga, his ex Kylie Jenner, 21, took Lindsay’s comment in a lighthearted way. A different source EXCLUSIVELY told us that now that she’s with baby daddy Travis Scott, 26, she’ not bothered by other women flirting with her ex. “Kylie isn’t bothered by Lindsay flirting with Tyga,” the source said. “Kylie has moved on from her relationship with Tyga and feels like if Lindsay wants him, she can have him. Kylie thinks it is funny that Lindsay is hitting on her ex, and she and Travis both laughed about it together.”