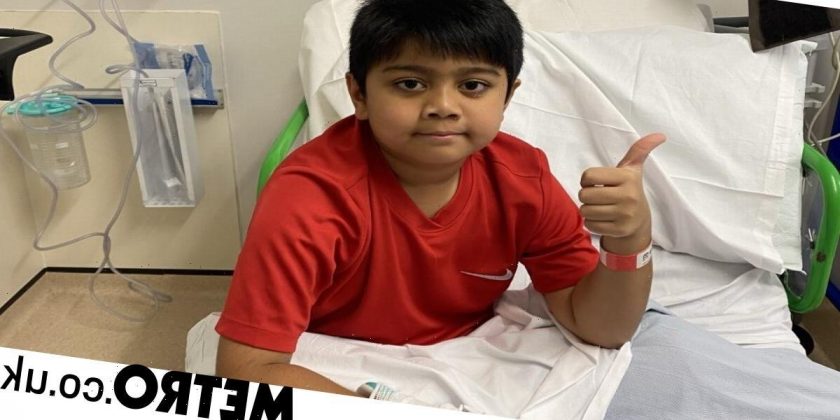 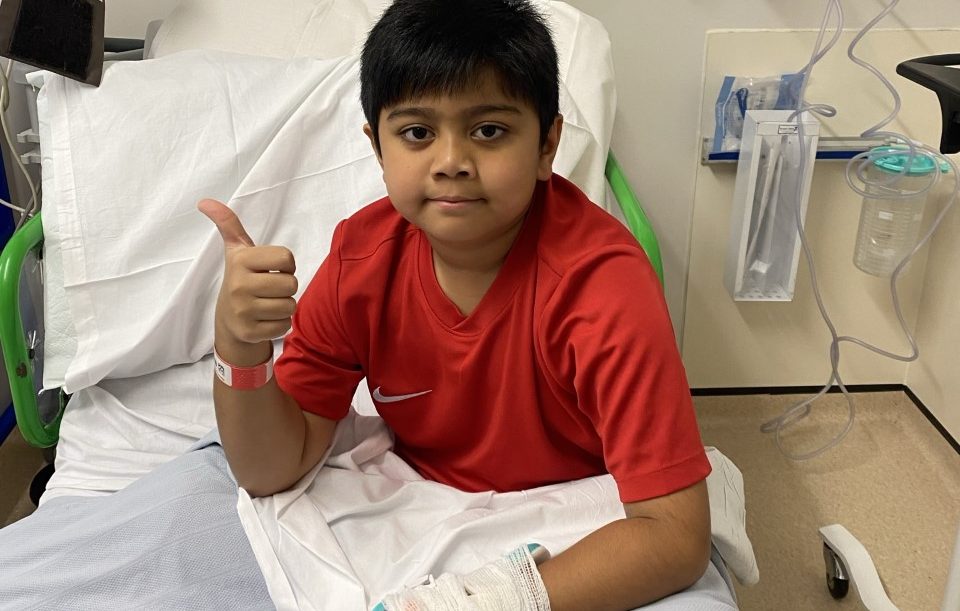 This time last year, mine and my husband’s world crumbled.

He’d always been a happy and healthy boy, with no prior health issues until they started causing him pain.

Our GP referred us to hospital in October 2021 where Carson was seen at the paediatric oncology clinic.

The lesions on his arms were found to be pseudo-aneurysmal, meaning they had been caused by an injury to his blood vessels.

Following a CT angiogram the next day we were told news that would change our lives.

Not only did he have an aneurysm in his arm, but there were multiple aneurysms in his body – three of which were attached to his vital organs, including his aorta and kidneys.

Carson was transferred to Great Ormond Street Hospital (GOSH) a few days later so he could be given the best possible treatment. There, he was diagnosed with a rare vascular disease called Takayasu’s arteritis – which causes blood vessel inflammation.

It was worrying – there was no cure and without treatment it would potentially become very dangerous.

The plan was for Carson to undergo chemotherapy for 10 weeks, and that drove home how serious things were.

Not only were we concerned about the long-term side effects of chemotherapy, but we weren’t sure how Carson would respond after the 10 weeks were up.

But his situation was about to go from bad to worse.

On 19 October he woke up complaining of severe back pain and was in real discomfort.

Consultants had to move quickly as the two aneurysms on Carson’s kidneys were close to rupturing, and perform life-saving emergency surgery.

Seeing our son in intensive care with all the tubes attached to him was heart-breaking – our lives had been turned upside down. Only a few days before, Carson had been living a normal life, going to school and meeting friends.

Surgeons eventually removed both of our son’s kidneys and gave him an aortic bypass repair followed by a year of dialysis, starting in early December 2021. We knew this was just the beginning of a long road to recovery.

Without kidneys, Carson was no longer able to go to the toilet, so dialysis three times a week for four hours at a time was the only way he could rid his body of toxins.

It was enough to be told this as parents, but relaying it to Carson was even more challenging.

After his kidneys were removed, Carson’s diet became restricted and water intake was a mere 350ml a day to avoid needing more dialysis.

During the hot summer months the limit on water was particularly tough. Despite feeling exhausted, Carson was determined to live as normal a life as possible and insisted on going to school two days a week.

I knew having some normality was essential for his well being, but at the same time, I couldn’t help worrying about coughs and colds.

Carson was highly immunosuppressed due to his treatment, and any illness caught from school could have made him very unwell.

That December, we started noticing that Carson was withdrawn and not his usual bubbly self, leaving us really concerned.

He didn’t let on that anything was wrong at home, but during hospital visits he wasn’t very responsive and often wouldn’t look up when spoken to.

We’d put it down to him having gone through so much at his young age.

One day at home Carson did not respond to my calling while he was in the bathroom.

When I went to check on him his head was looking downward and it seemed he’d not heard a word I had said. That’s when I had the terrible realisation that he couldn’t hear me.

Carson was seen by an audiologist at the Sight and Sound Centre at GOSH and they confirmed he had hearing loss possibly caused by his condition.

Sadly, Carson still could not hear anything even with the hearing aids he was fitted with.

He was diagnosed as being profoundly deaf and things just seemed to keep getting worse for our son.

The moment Carson had realised he could no longer hear was the moment he started adapting to the changes in his body himself.

All along he had been looking at our mouths when we spoke and was learning to lip read.

When asked, ‘Why didn’t you tell anyone you couldn’t hear?’ he said, ‘Because I thought my hearing would come back.’

At the same time, we were still ploughing ahead with his other treatments.

During his dialysis session on Christmas Eve 2021, everything was going smoothly and the play team on his ward were throwing snowballs to help spread the Christmas spirit.

But, just as we were about to leave, doctors found that his last temperature check was very high. All Carson wanted was to be home with family for Christmas.

He was discharged, but under the strict instruction that we return on Christmas Day for possible admission if he still had a temperature.

Carson managed to have Christmas lunch with us, but due to sickness and chest pain we headed back to GOSH earlier than planned. The whole family – and Carson – were gutted.

While it wasn’t the best situation, nurses did everything they could to make Carson feel happy, even bringing him extra Christmas presents.

Our next mission was getting him a new kidney.

His consultants were worried at one point that this might not be possible for Carson because of his blood vessel inflammation. They were concerned that an aneurysm may attach itself to a transplanted kidney and we would be taken all the way back to square one.

To be told that after latching onto the hope he would have a transplant was devastating.

Not wanting to give up hope, we asked if we could start testing family members for kidney matches in case a transplant would one day be possible.

Myself, my husband, my eldest son and my brother John all did the test and a few weeks later we were called back to GOSH.

My son was told he wasn’t a good match, while my husband was told his kidney had a 50% chance of succeeding.

I was a better match, but Carson’s uncle John was a perfect 100% match and a universal blood type. We were told it was very rare that a family has so many options to use.

By this time Carson’s body had responded really well to treatment for his vascular disease and his consultants were happy for him to undergo a kidney transplant. Finally, some good news!

We’d gone from having no hope to Carson having a brighter future.

Finally, in October 2022, transplant day arrived. My brother was admitted to Guy’s Hospital while Carson was at GOSH. The first thing John asked when he woke up was: ‘How’s Carson?’

Carson’s future is so much brighter now

Carson was in the theatre for seven and a half hours – the longest hours of my life.

Following the op, Carson had a drain site and a catheter, which usually would be kept in for a week, but hospital staff made a deal with him on day three, saying that if he could start walking they would take it out.

And my boy got out of bed, he was so determined.

Before we were allowed home, we moved to family accommodation close to the hospital, which is funded by GOSH Charity.

We had to shield there for a fortnight before we could go home.

Carson’s future is so much brighter now and he is eager to do things he could not over the past year.

He still has a long way to go as he has two aneurysms in his brain, which are closely monitored and they are in a place where any intervention is high risk.

In January, Carson is scheduled to have a cochlear implant to aid his hearing and we’re crossing our fingers that all goes well so that he’ll be able to access sound and speech again.

Everyone has had a part to play in Carson’s journey. Every single nurse, consultant and surgeon has been amazing. There are no words that can express how grateful we are. We can’t thank everyone enough.

Carson is looking forward to having a normal Christmas this year. We’re going to spend it with his uncle who donated his kidney, alongside the rest of his family in Buckinghamshire.

Carson is testimony to the fact there is always light and hope.

By making a donation to GOSH Charity’s Christmas Appeal, you’ll help fund the vital resources they need to get seriously ill children home with their families in time for Christmas. To donate to the Christmas Appeal go to gosh.org/donate/Christmas.