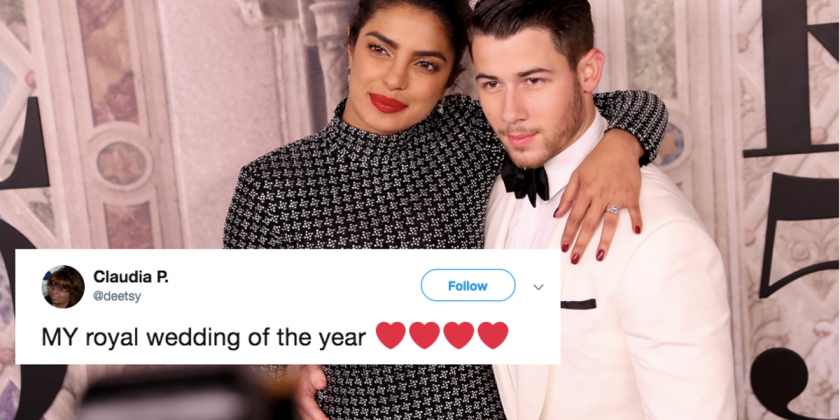 The Jonas-Chopra wedding extravaganza has been in full force since friends and family landed in Mumbai, India on Wednesday, Nov. 28. The highly-anticipated Indian wedding ceremony of Nick Jonas and Priyanka Chopra will take place on Sunday, Dec. 2, per People and prior to that they will have a traditional Haldi ceremony. Ahead of those ceremonies , though, these tweets about Nick Jonas and Priyanka Chopra’s Christian wedding ceremony show that fans are so here for all the wedding weekend festivities.

If you’re not all caught up with the love timeline of Jonas and Chopra, the pair announced their engagement back in July 2018, and now they’ve already walked down the aisle before the end of the year. Hey, when you know, you know, right? While this pairing might be unexpected, Jonas and Chopra have turned out to be one of the most-loved celebrity couples of the year. So it’s no surprise that fans have been glued to the various wedding ceremonies taking place in India. Per People, Chopra and Jonas were married during a Christian ceremony on Saturday, Dec. 1. Us Weekly confirmed that the pair were married in their first ceremony at Umaid Bhawan Palace in Jodhpur, Rajasthan on Saturday.

From the guest list to the pure love between Jonas and Chopra, fans could not get enough of these two and their Christian ceremony. In a sweet show of love for their families, both the bride and groom had their siblings in the wedding party. The groomsmen included Nick’s brothers, Kevin, Joe, and Frankie, and Chopra’s brother Siddharth was also standing alongside the bride and groom.

Oh, and the officiant of their Christian ceremony was none other than Nick’s father, father, Paul Kevin Jonas Sr., per People.

Needless to say, fans following the romance are so here for these two finally tying the knot.

While people are so happy for these two, some people can’t help but want to see more from this special day. TBH, I am also team "I need to see this dress RN," so I can totally relate.

While this ceremony is likely serving as the final one, the pair has been busy ever since they landed in India ahed of the Thanksgiving holiday on Nov. 22. Do you remember this sweet Instagram post from Chopra on Thanksgiving, when she simply captioned this loved-up snap, "Welcome home baby…"

Seriously, these two seem like they were made for one another. Seeing as though there was no shortage of friends and fam to celebrate this pair, it’s clear that those closest to them also think that this union is a perfect match.

Take a look at this cheerful post from before all of the major ceremonies started going down. Chopra wrote a simple caption about all the togetherness in an Instagram post on Wednesday, Nov. 28. She shared a pic that includes the likes of one of Nick’s famous brother, Joe Jonas, and his fiancée, Sophie Turner. Getting the wedding weekend off to a start filled with love, she wrote, "Friends.. family.."

To really hammer home that these two are all about family, I’ll leave this Thanksgiving photo that both Jonas and Chopra shared on their respective Instagram accounts. Jonas got in on the family action in his caption that read,

What a beautiful Thanksgiving. Hope you all had the best day with your loved ones.

With the smiling faces from all of the wedding ceremonies (and the lead-up events), it seems like everyone is overjoyed that Jonas and Chopra have finally tied the knot.