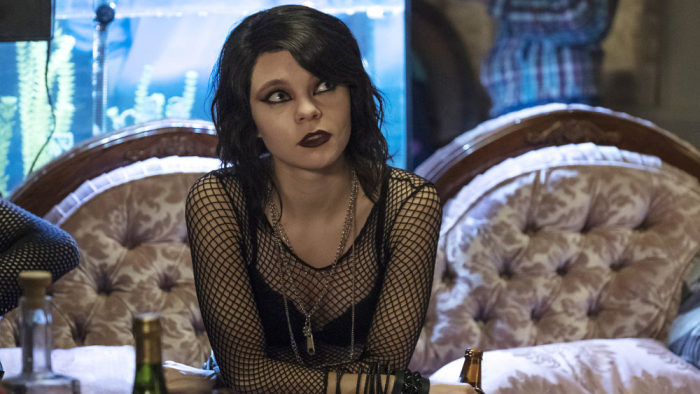 High school, according to TV and movies, is either the best or worst thing that can happen to a person. It’s almost always depicted as the most fun a kid can have, or a horrifying hellhole from which there’s no escape. “Deadly Class” is decidedly in the latter camp — and despite its edgy attempts otherwise, doesn’t particularly find a new way to show it.

Adapted from Rick Remender’s comic book series and produced by the Russo brothers, “Deadly Class” travels back to 1987 to tell the unlucky story of Marcus (Benjamin Wadsworth), an orphan who gets recruited out of homelessness to enroll in the King’s Dominion High School for the Deadly Arts. Headed up by the exacting Master Lin (Benedict Wong), King’s is like Hogwarts, if Hogwarts was brimming over with snarling teens training to become vicious assassins. And in fact, the best directing comes not in the try-hard action sequences, but in the winding hallways of the school when following Marcus as he vacillates wildly between trying to blend in and itching for a cathartic fight.

The strict social order at King’s is that of a typical high school cafeteria crossed with a prison yard, as the students self-segregate into groups according to cool factor and, more often than not, race. Everyone is a high school cliché to the nth and nastiest degree. The “legacy” nerds are trust fund babies; the “jocks” are kids of KGB operatives. The cheerleaders (because apparently an assassin school still needs cheerleaders) are sneering neo-Nazis. The Latinx and black students have formed their own fiercely protective gangs. Marcus, a half-Latino orphan, doesn’t seem to fit in anywhere. He ends up with the burnouts, who spend their free time chain smoking on the roof and pontificating about the evils of capitalism.

So perhaps it’s unsurprising that a malevolent streak of nihilism pulses underneath the entire show. Sometimes, it makes sense; Marcus only goes to King’s in the end because, as he realizes while teetering on the edge of a building, he doesn’t have much to lose. Though Marcus rarely realizes it, most of the King’s kids are desperate, whether because they want to prove themselves or just plain survive — or both.

But what seems cool and lacerating on a comic book page doesn’t necessarily translate exactly to the TV screen — and Remender, who acts as co-showrunner and writer to the show, doesn’t seem to make as many adjustments as perhaps he should’ve to make his material sing. Marcus’ journal entries, which he sporadically reads to us in a monotone voiceover, are moralistic screeds that even “Fight Club” might have rejected for being too blunt. (This, despite Marcus insisting to himself that “morality’s just comfort food — it holds no meaning outside our minds.”) Again, this isn’t exactly out of step with how a teen boy with nowhere to put his anger might write, but the show is far more impressed with him than it frankly should be.

Case in point: it takes way more time than necessary for “Deadly Class” to even infinitesimally shade out any single one of its female characters. Maria (María Gabriela de Faría) is promising and charismatic, but quickly gets lost in a tired storyline with her abusive gang leader boyfriend Chico (Michel Duval) that brings out the least interesting in them both. Goth girl Petra (Taylor Hickson) and white supremacist mean girl Brandy (Siobhan Williams) are only there to be inverses of each other. Most egregious of all, the incredibly charming Lana Condor (“To All the Boys I’ve Loved Before”) is wasted as Marcus’ crush Saya, who rarely gets to do much on her own that doesn’t connect to her being Marcus’ crush.

So even if “Deadly Class” talks a tough talk about being different and darker than those other high school shows, watching it walk the walk often proves more frustrating than fascinating. Even when it lets characters admit that they’re not quite as tough as they seem, that they want to be braver and better and less of a high school cliché, the potential of that vulnerable moment is more frustrating still because “Deadly Class” so rarely does the same for itself.