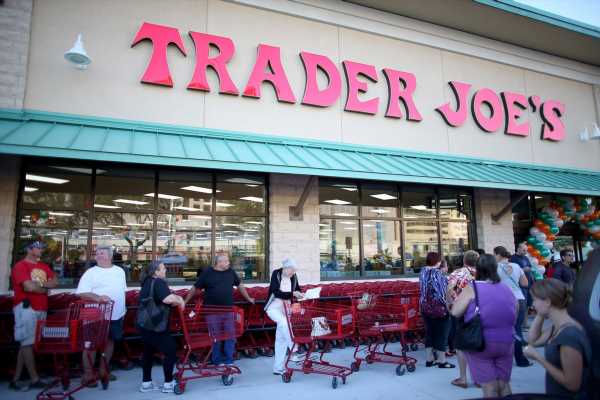 In the name of the Cookie Butter, the Charles Shaw, and the Everything But The Bagel seasoning, Amen. If you’re looking for grocery stores with the best prices and private-label products, look no further than everyone’s lord and savior Trader Joe’s. If the store started selling beds made of their puff pastries, none of us would ever leave.

In a comprehensive survey of its 75,000 members, Consumer Reports recently published a list of the best grocery stores, both regional and national. As if you needed another reason to worship the grocery chain, Trader Joe’s was named one of the top 13 grocery stores in the country in terms of prices and private label products, beating out other big-name chains like Whole Foods and Target.

“The national chain, known for its funky vibe and unique store-brand products, impressed our members the most with its competitive prices, store cleanliness, employee helpfulness and attentiveness, checkout speed, and store-brand quality,” Consumer Reports states in their survey results. “Trader Joe’s is the only national chain among the top-rated grocers overall, according to our survey.”

Though Publix was noted for its cleanliness, it didn’t make the top 13 in pricing. As TODAY notes, other major retailers like Acme and Walmart landed at the bottom of the list. This calls for a glass of your finest $3.99 Charles Shaw rosé and an entire sleeve of Joe-Joes.

Also of note is Aldi’s spot on the list. As Consumer Reports notes, the chain known for its “no frills” approach to groceries is “fast-growing,” having recently expanded to the East coast and southern California. “Its stores are on the small size—they’re about one-third the size of a typical American grocer—and sell a limited selection of mainly private-label goods,” Consumer Reports states. However, their savings are big as far as customers are concerned.

Costco was also one of the major chains to make the list. Survey respondents were particularly impressed with the retailer’s meats and poultry quality as well as store-brand products’ quality.

Trader Joe’s was recently named by Forbes as America’s best employer. This is likely little surprise to anyone noted the grocery chain’s number two spot last year. “We’ve been around for over 50 years, and we’ve never had layoffs. We stay true to what we know works for Trader Joe’s and our crew members,” Jon Basalone, president of stores at Trader Joe’s, told Forbes. “You combine that with the pay, benefits and supportive, fun environment, and people tend to want to stick around.”

Trader Joe’s isn’t just money conscience when it comes to their product’s prices. According to Forbes, the grocery chain personalizes its minimum wage based on the location of the store. In addition to competitive hourly pay, Trader Joe’s employees are also offered health insurance, a company-funded retirement plan, paid time off, and flexible work hours.

Can you guess which chain was also named best grocery store by customers in a 2019 survey by consumer data science firm Dunnhumby? If you said anything but Trader Joe’s, you aren’t paying attention. For the second year in a row, respondents put Trader Joe’s at the top of the list of the country’s top 55 supermarket chains. The ranked was based on seven criteria: price, quality, digital (meaning online and in-app shopping), operations, convenience, discounts, and speed of shopping.

Perhaps knowing that you’re shopping at everyone’s favorite store will make up for long checkout lines. (If not, there’s always the free samples. Free samples make everything better.)