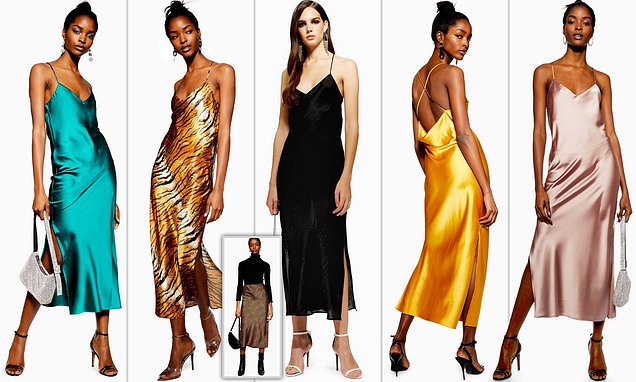 Topshop has released a dress version of its sell-out silk slip skirt in eight colours and prints – just in time for Christmas.

The High Street retailer is selling its Satin Slip Dress, priced at £35, in pink, yellow, black, turquoise and khaki, as well as in tiger print and daisy print.

The elegant frock is already proving popular, with the purple version already completely sold out online and others flying off the shelves.

It comes after the success of Topshop’s silk slip skirt, priced at £29, which has been sweeping Instagram and sold out in a number of colours. 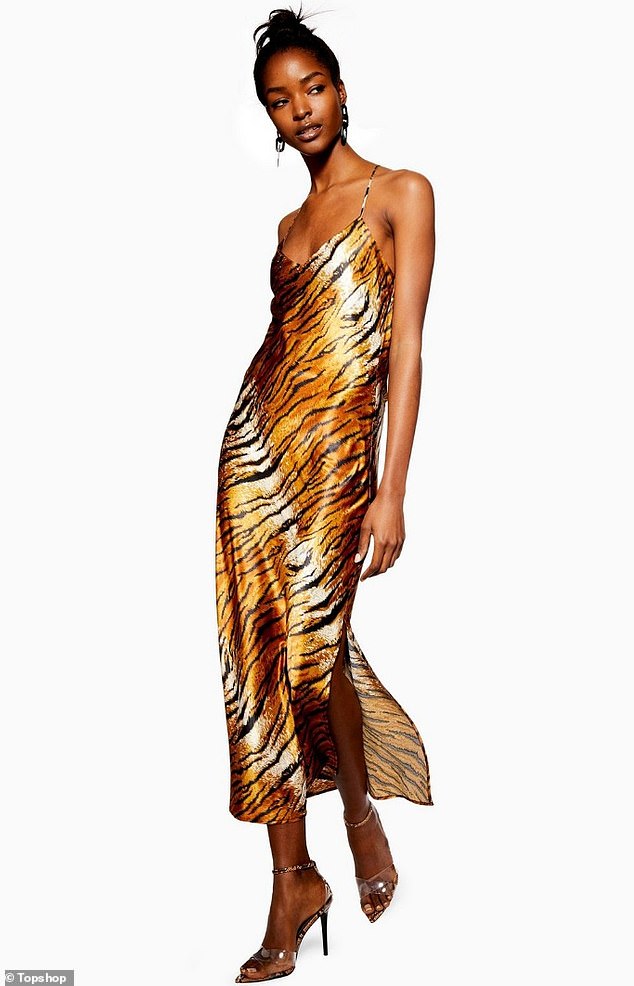 Topshop has released a dress version of its sell-out silk slip skirt in eight colours and prints – just in time for Christmas. Pictured is the tiger print version

The Satin Slip Dress, which is priced at £35, is available in fail-safe black (left), as well as a bold yellow colour (right) 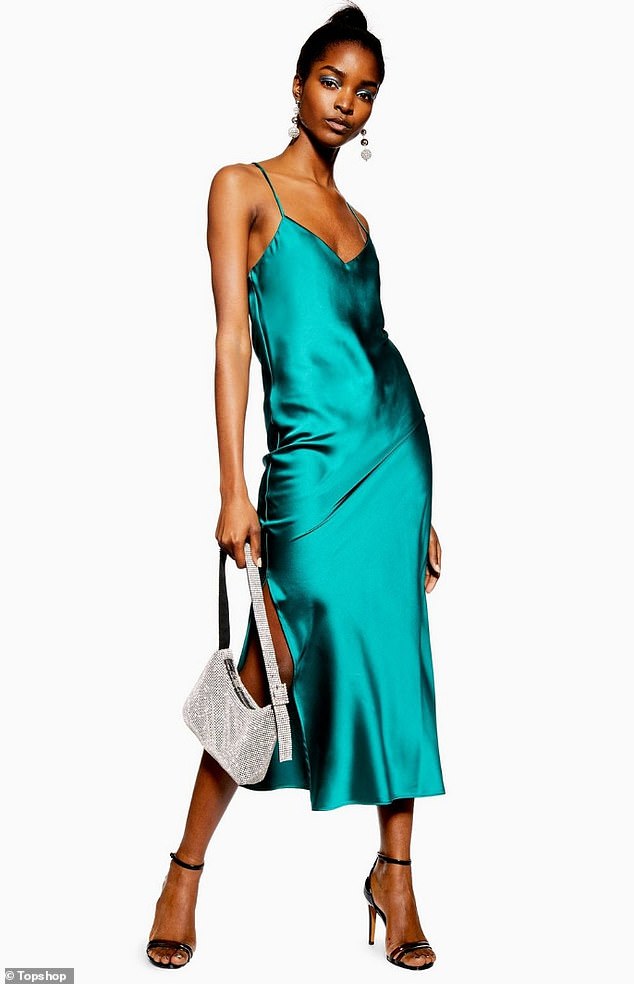 The slink frock, featuring a low V neckline and daring thigh-high splits, also comes in turquoise – but it is already sold out in a number of sizes online

The Satin Slip Dress features a V-neck and spaghetti straps, along with daring thigh-high splits.

The slinky frock, described on the website as ‘gorgeously glamorous’, also has a low draped back, with cross-over straps.

The tiger print version has been a particular hit among fashion influencers, who have been showing off the frock on Instagram.

The dress is a similar style to Topshop’s £29 Satin Bias Midi Skirt, which was released in five colours at the end of last month. 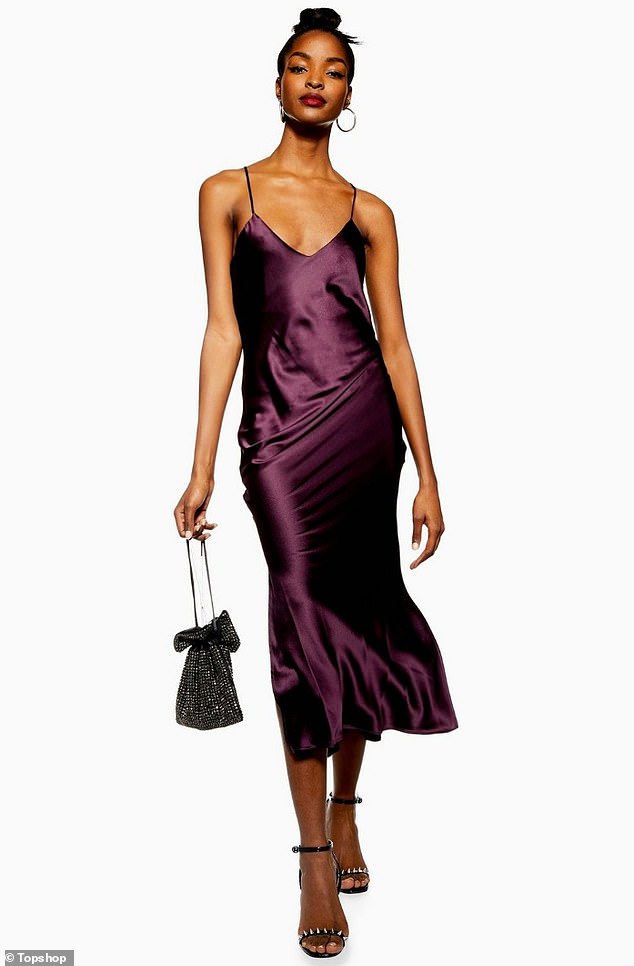 The glamorous slip dress also comes in a deep purple colour (above), but this version is already completely sold out online

The Topshop slip dress is also available in khaki (left), and a monochrome daisy print (right)

The £29 midi swept Instagram when it was first released in rust, with fashion fans declaring it a must-have.

A number of the colourways have now sold out online, including navy and khaki.

Topshop has had a number of sell-out hits this year, including its Mix Spotted Midi, priced at £49.

The white and black polka dot dress, seen on the likes of TOWIE’s Chloe Lewis and and Kate Wright, quickly sold out online in January, before appearing on eBay for as much as £200.

The retailer re-launched the dress in a series of other prints, after the design became a fashion favourite. 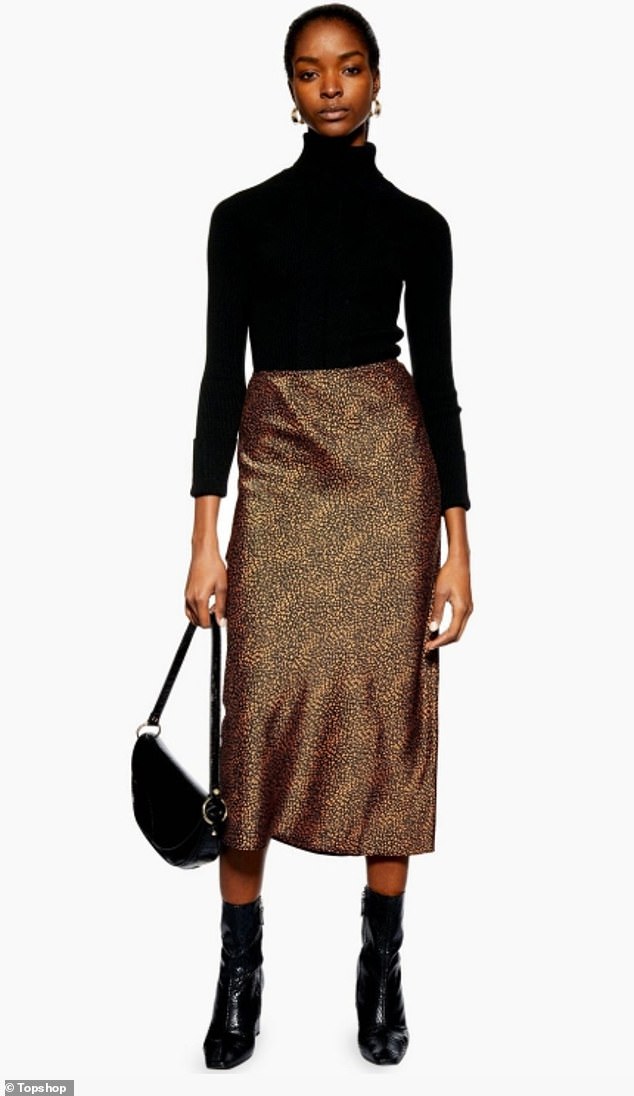 It comes after the success of Topshop’s silk slip skirt, priced at £29, which has been sweeping Instagram. The leopard print version (above) is almost completely sold out online