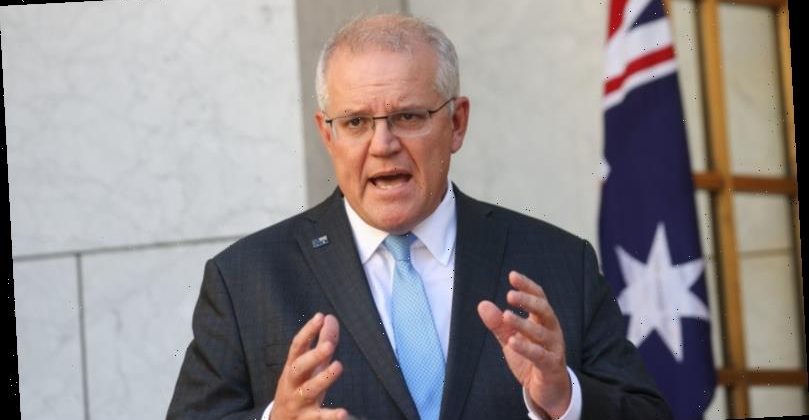 Leading a government under daily pressure over the treatment of women, the Prime Minister this week unveiled his new-look cabinet and established a new taskforce of female ministers.

Announcing the reshuffle, which increased the number of women in cabinet from six to seven, Scott Morrison also revealed the Minister for Women Marise Payne would act as o-chair to the new taskforce, alongside him, making her “effectively the prime minister for women”.

It was a job description, chief political correspondent David Crowe reported, that the Prime Minister went on to revise after journalists asked whether he was not fit to be prime minister and should be the women’s prime minister. 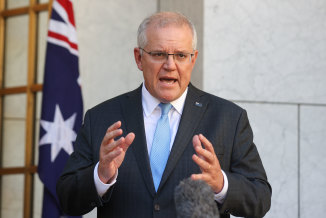 Prime Minister Scott Morrison during a press conference on his ministry reshuffle on Monday.Credit:Alex Ellinghausen

“In relation to what I should probably call the primary minister for women, just to ensure that no one gets too carried away with the puns … what I’m trying to bring together is a team of ministers and Marise Payne as Minister for Women can bring all that together as a leader of that portfolio team,” Morrison said.

The taskforce, which will include all female ministers as well as Treasurer Josh Frydenberg, Finance Minister Simon Birmingham and Deputy Prime Minister Michael McCormack, is expected to play a key role in developing policies on women’s safety and economic security.

Morrison also foreshadowed budget measures to improve the treatment of women and tougher rules for Facebook and other tech companies to counter any harassment women faced online.

“We’ve got to build the respect again,” he said. “And one of the key degraders of respect in our country is social media.”

Most readers viewed the cabinet reshuffle with scepticism, with “same-old, same-old” and “too little, too late” being common sentiments.

David Arthur: “No new faces in cabinet, and no one dropped. The same group, very comfortable with each other, all nodding and winking after Scotty’s cleverness.” 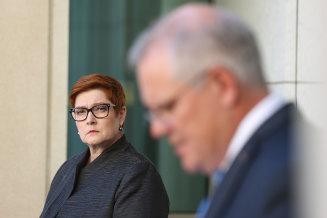 Crowe says while the new taskforce has a flavour of Yes, Minister about it – “in the way it looks like action when the real outcomes are pending” – it will be up to the men, not only the women, on the taskforce to prove what’s achieved.

“The net effect of the reshuffle was that more women gained more influence in the cabinet, and that is a good thing,” he says. “It is up to Morrison to listen to them, of course. I think he knows that his fate as prime minister depends on whether he does.”

Some readers acknowledged that despite the Prime Minister’s efforts he was seemingly in a no-win situation.

Many readers weren’t prepared to overlook the fact that government MP Andrew Laming, who has been accused of taking photos of a woman while she bent over, would stay on the government benches until the next election rather than depart immediately.

Shirl: “Morrison can talk all he wants but as long as he allows Laming to remain in the Liberal Party no one will believe him.”

Scotty from Stationery: “If Morrison was genuine about his intent he’d sack Laming immediately.”

johnS: “The majority is much more important than doing the honest thing with Laming.”

Readers also believed the government missed the mark with its focus on social media.

Cranky: “It’s not the social media tool that needs fixing, it’s the attitude of the loose nut behind the wheel that needs adjusting/educating.”

Pjma42: “The individuals who currently use social media to attack women will simply find another way to continue their attacks. Surely you are aware women were attacked, dehumanised, belittled and objectified before Facebook etc were even a thing. You need to look at the culture.”

jopaca: “It’s total nonsense to suggest that social media is the key driver of the inequality, harassment and abuse of women. If social media were to be removed completely tomorrow, the issues would still be there, same as they were before social media. These issues have not been taken seriously.”

Online readers of The Sydney Morning Herald and The Age made 30,004 comments on 531 stories in the past week.

Most-read by subscribers in the past week