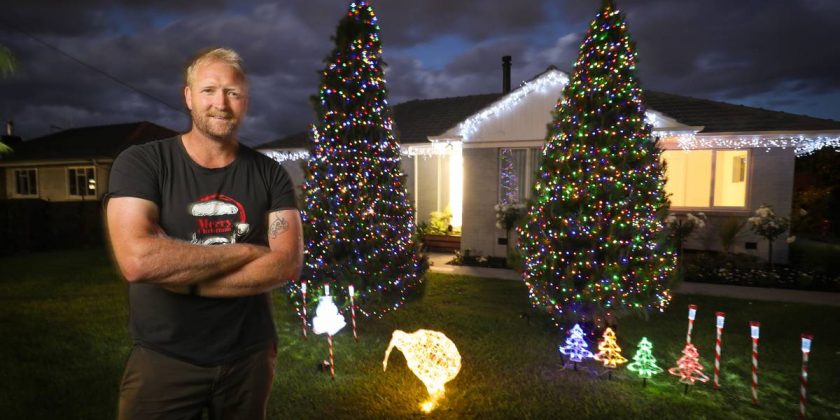 From the Prime Minister’s recycled tree to an Olympic gold medallist’s front lawn, six notable New Zealanders talk to Kim Knight about the ornamental – and sentimental – meaning of Christmas.

Picture perfect trees are for catalogues only. When it comes to making Christmas meaningful, notable New Zealanders say it’s the homemade and heirloom decorations that really sing – even in the highest living rooms of power.

“Yes, we still have that same ratty tree,” confirms Clarke Gayford, television presenter and Prime Minister Jacinda Ardern’s partner. “It’s kind of our thing now, and we are doing our bit by recycling it each year.”

Gayford’s talking about the spindly, white tinsel tree the New Zealand Herald first spotted in January 2017. Back then, it contained a single handmade decoration – a boat. Since then, the couple have moved houses, had a baby and, most recently, celebrated Ardern’s second term as Prime Minister. But has the Ardern-Gayford household upped its Christmas ornament game?

“Curiously people have sent us a lot of custom tree decorations over the last few years, some bespoke for each of us, so we drag them out and spruce the tree up a bit.”

“Neve’s already cottoned on to what Christmas is, so this year we will probably make a bit more of an effort with decorations . . . if time allows.”

Though there’s no definitive rule on when to erect your Christmas tree, the first weekend in December is traditionally a time to untangle the lights and unpack the sentimental ornamental trappings of the season. Six notable New Zealanders shared their favourite decorations with the Herald . . .

Toni Street, broadcaster, Coast FM
“My mum is a Christmas nut. She was a Santa Bear collector and I remember as a kid I went in a talent quest at the New Plymouth mall. I would have been 6 or 7, and they spun the wheel and I won this baby bear and that was the start. Every year, she would buy the Farmers’ Santa Bear and she has, without a word of a lie, probably 50 bears. Every time someone has a baby – and I’ve had three, and my sister’s just had her first – we get a picture in among all of the bears.

“We found these two bears in a random little store in Queenstown when we were away on alittle babymoon before we had Juliette. We were like, ‘right, this can be the start of our bear collection’.

“I’m really big on Christmas. It’s not just the tree, but actual stand-up ornaments. I have a big snowman, I have a Santa that’s about six foot in my foyer, and I have this huge reindeer head – it’s actually a bit creepy. I wouldn’t say I have a classy Christmas house, I have an anything goes type of house! I’ve got one tree that’s got all the homemade, handmade decorations and colourful lights everywhere. Then I have a ‘mum’ tree that’s got all my golds and silvers and perfect little bud lights. I want the best of both worlds!”

Sara Hughes, artist and creator of the glass panel work at the New Zealand International Convention Centre
“The boys made these when they were3 and 4 years old. They were so excited about putting up the Christmas tree, and also about starting to make things to put on it. I had a large amount of collage material . . . and lots of glue. They’re very handy-made in contrast to all the mass-produced baubles you get.

“I think when they’re in that preschool kind of time they’re less aware of, say, what a dog exactly should look like but they’re happy that their dog has legs and fur.

“When I look at their artwork from this time, it’s just really that delight in making, the excitement – there’s a real immediacy . . . and then suddenly they feel quite a bit older, time seems to jump forward as it does in life. So when I see these it brings back all those memories of what it was like at that time with them and the things that we did, and that time of Christmas.

“Christmas Eve is quite a big thing in our house because [my husband] Gregor is Slovenian, so we always have people come around, and then Christmas morning my family come around. Those decorations have been up there for a number of years now, and are added to.”

Eric Murray, rower and double Olympic gold medallist
“It’s finally died, but for about 10 years we had this big silver ball. You used to make a noise or clap and it would sing. It goes ‘Hey! Hey you over there!’ and its eyes would open and shut. You’d put it in the tree and people wouldn’t know where it was coming from. It’s one of those things you love to hate, because the song – Rockin’ around the Christmas Tree – went for about 90 seconds. It got hammered over the years, dropped on the floor and Zac used to poke its eyes. Once, I had to undo it and solder a couple of wires back on.

“I’ve always loved Christmas. Everyone seemed to be happy, and you always caught up with your relatives. Good times and good spirits. When Zac was born, it was like ‘sweet’ – Christmas is for kids, and you basically relive your youth. He’s 9, and he’s autistic. He loves helping decorate the tree. He puts different pieces on and changes them up every day and moves them around.

“There’s a couple of places here just outside of Cambridge . . . they’ve got some five-metre trees and I’m going to get one and stake it in my front lawn. I’ve been buying solar ornaments. candy canes and there’s a really cool Kiwi. I just want to bring a bit of cheer. I think this year’s going to be quite poignant. It’s like ‘okay, let’s park that year, and let’s hope this coming year is a little bit better’.

Cecilia Robinson, entrepreneur and co-founder of My Food Bag and Au Pair Link

“I’ve got specific ornaments from Sweden where I’m from, and that’s started a little bit of a trend in our family. Every time we go to a city or a country we will buy a local ornament, a reminder of each place we’ve been to . . . even if it’s in the middle of summer and we’re in the cathedral in Florence, we’re buying an ornament from there.

“This is the original one. It’s really hard to describe because Swedish Christmas decorations are quite freaky. I don’t even know the word for it in English! Julbock [roughly translates to ‘Christmas goat’]. We’ve got all these specific myths and legends and it’s often around children and animals.

“The traditions in Sweden are so instilled. My mum’s got the most amazing collection of Christmas gnomes. You go to the Christmas markets, it’s cold outside, it’s a whole different feel. This year’s ornaments, one came out of Queenstown, and one came out of Wellington. Just something to remind us of the year that was.

“I still love Christmas in New Zealand. I will watch all the corny movies, I will be baking. The first year that My Food Bag was operating we started collecting Christmas gifts for people in need.Our kids look forward to going out and buying things for people – and this year, more than ever, it’s needed, right? Being able to do things for your community, taking the focus off ourselves and focusing on other people is something that’s really special.”

Sid Sahrawat, chef, Sidart, Cassia and Sid at The French Cafe
“This was a special time for us in 2015. Zoya was just finishing kindy, it was our first Christmas in our new house and we were going to stay in Auckland because of our son Roan’s arrival. Those are Roan’s feet, and Zoya is in the photo. It’s quite nostalgic – your kids grow up and you think about how little they used to be!

“Most of the time, we’re flying out of New Zealand at Christmas. Two years ago, we were in New Delhi, stuck in traffic – it took us two-and-a-half hours to get to the hotel that was 10 kilometres away. We usually close the restaurants for four weeks, try out new restaurants and cultures, and it’s my real time with the kids. This year, with all the disruptions, we’re open right through. If I could travel a little bit outside of New Zealand, that would definitely be on my Christmas wish list!”

Teuila Blakely, actor
“Even though we are actually from Samoa, my grandmother moved to Hawaii in the last 30 years of her life. Mary Agnes Milford Schwalger. She passed away in 2006 which was the same year we took Sione’s Wedding to Hawaii [International Film Festival]. And I was so sad because she’d passed, but also that was such a seminal time in my life, a time when things changed. I haven’t stopped working since.

“It was the first time I’d been to Hawaii as a tourist . . . and I was in Ala Moana one day and I saw this little girl and went ‘oh my God, that is me in a Christmas decoration’. When we grew up, because of our Hawaiian connection, I learnt the hula as well as the suva.

“I was so stoked. I go big at Christmas and this little girl here started my Polynesian Christmas decorations collection. I’ve got the hibiscus and the jandals but she will always be the first and I’ll never forget that time because it represented, so much, what I’d worked for and so much that had changed.”