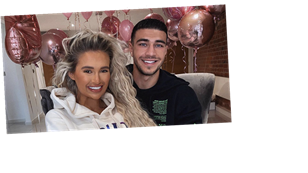 Tommy Fury and Molly-Mae Hague have moved into a gorgeous new home in Cheshire for a "new beginning" following the death of their puppy Mr Chai.

The Love Island 2019 runners-up were left devastated after Tommy's gift for Molly's 21st birthday tragically passed away, and so decided to move to a £1.3m abode that they're now renting for the next six months and ditch their Manchester apartment.

The social media influencer has been sharing a peek inside the home that she shares with her boxer boyfriend, also 21, that she explained was temporary until they can find a more permanent residence to buy by the end of the year.

Molly-Mae and Tommy moved away from Manchester city centre for a quieter area on the outskirts in with their new house located in Hale.

The reality TV star explained in a house tour video on her YouTube channel that initially she didn't want to view the property as it was just a day after her dog Mr Chai passed away.

But urged on by her agent the couple visited the apartment and promptly fell in love with it: "Best believe we have been looking for a house for coming up to a year. Since we came out of Love Island we've been on Rightmove every single day.

They've upgraded to include their own driveway leading up to the stunning three-bedroom property which features a dark grey roof, a balcony and modern brickwork.

Inside the spacious living room they've replaced the cream sofa that is shown in the property listing, and it now boasts their plump silver-grey suede sofa as well as plush grey carpets.

The room also has amazing high ceilings which are flooded with light from the balcony doors which slide open along the full length of the room.

On the other side according to the property listing, there is also a fireplace and more windows that create a wonderfully light room.

Molly and Tommy have also hung up an interesting silver light features instead of the original chandelier, made up of five silver baubles. Not to mention a silver telescope and silver coffee table with a marble top, that matches the marble in their bathrooms.

The couple have kept their bedroom pretty simple, bringing their bed from their previous place and mounting a television on the wall.

The open plan kitchen-dining area has been given the Molly and Tommy touch with the dining table including matching silver velvet chairs surrounding the chic dark wood table.

At the breakfast bar, instead of the white stools, the reality TV couple have opted for more grey furniture adding two comfy tall chair stools.

The incredibly sleek all-white kitchen space includes state-of-the-art fixtures and fittings like a wine fridge, a double oven and a huge fridge.

The beauty entrepreneur also gave her followers a short tour around her new home and showed off a beautiful all-marble bathroom featuring a deep bathtub.

In the short clip, she stood in front of the mirror wearing a simple grey dress t-shirt to reveal her new surroundings.

She wrote over it: "Also had a much needed change of location. Didn't realise how much I needed a fresh start…"

The TV personality also shared a photo on her Instagram, showing the messy side of moving into a new home as the room was filled with boxes of clothing alongside several large Louis Vuitton bags.

Molly-Mae recently posted a very glam selfie posing in a tight black bodysuit and her long blonde hair worn down in a poker straight style from the perfect sunny spot on her balcony.

She thanked her fans for all their support in the caption of the snap: "New beginning. Can’t thank you all enough for the love…."