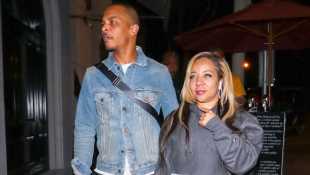 Tameka ‘Tiny’ Harris is getting ready to bring a new spin to her music in the form of her alter ego, Ryder, and even though T.I. doesn’t want her to share the different personality he already knows to the public, she’s excited and can’t wait.

Tameka “Tiny” Harris, 43, revealed her plans to change up her music by bringing out an alter ego she calls “Ryder” to the world, in the most recent episode of T.I. & Tiny: Friends and Family Hustle, but it turns out T.I., 38, isn’t too thrilled about the idea and for very good reason. In the episode, the rapper opened up about how Ryder is actually the private bedroom alter ego Tiny made up for only him in the past, and he doesn’t want her sharing that sexy personality with anyone else. The singer is ready to hold her own, though, and isn’t ready to let her husband’s feelings stop her from going forth with her plans.

“Tiny respects her husband’s opinion and she always takes it into consideration but there are certain situations where she has to just go with her own instincts and this was one of them,” a source EXCLUSIVELY told HollywoodLife. “At the end of the day she’s an artist and she needs to express herself. Channeling Ryder is something she is doing for herself. She’s not going to do anything that will disrespect her husband, that’s not her style. But she also sees nothing wrong with following her own path as an artist, she’s a very headstrong woman and this is a passion project for her, that’s why she refused to back down.”

Tiny’s determination to bring out Ryder was apparent in a scene that shows the Xscape member trying out different colored wigs on the Apr. 29 episode of Friends and Family Hustle. “Everyone knows I like to switch it up. But this time, I’m trying to turn up the heat a little bit,” Tiny says about her plans for Ryder in the clip. A shocked and slightly annoyed T.I., also known as Tip, can be seen asking Tiny about her plans in the clip and expressing his frustrations in his on-camera interview. “Tip’s only thinking these things because he can’t let go of the bedroom Ryder,” Tiny continued to say in the episode. “He’s worried for nothing; she’s not going to be naked onstage.”

Despite the agreement, it seems T.I. and Tiny aren’t going to let things get out of hand and ruin the relationship between them. After all, they’ve had to go through a lot more difficult things in their marriage in the past, and they always got through it. “T.I was very jealous when he found out that Tiny was planning to share Ryder with the world,” our source explained. “But jealousy isn’t bad for their marriage, if anything it gives things a little spark. They have such a deep bond that these kinds of disagreements could never tear them apart. As much as T.I. can be opinionated at the end of the day he’s always going to have Tiny’s back.”