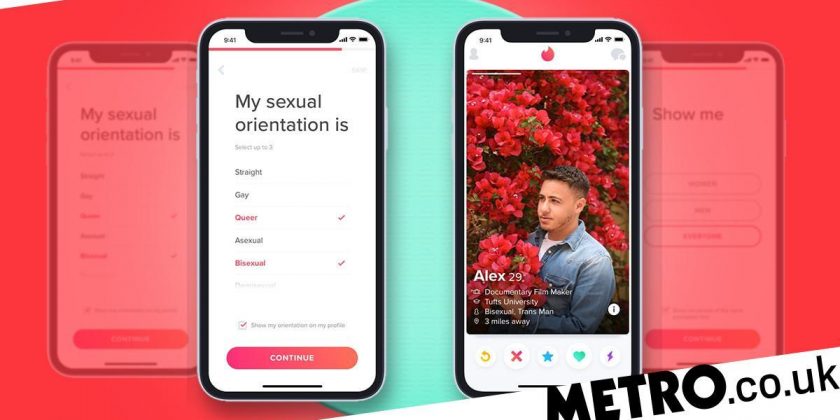 Tinder has made it easier to show potential matches who you are.

No, we’re not talking about an option that shows exactly what TV you’re watching at every moment.

The dating app’s new feature is called Orientation, which gives users the ability to select up to three sexual orientations they best identify with and prioritise potential matches based on their preferences.

You could already choose whether you wanted to match with men, women, or both, but the update will allow for more specific identity options.

So for example, you can list yourself as a trans woman, or someone who’s non-binary, then select your sexuality as bisexual, and ask to be shown everyone.

Users can also decide whether to show their sexual orientation on their profile, and whether they’d like to see potential matches of their same sexual orientation first (this bit will be within Discovery Preferences), so, for example, a bisexual person could prioritise other bisexual people, or someone non-binary may want to see those open to everyone first, or those who are asexual could see other asexual people come up first in their matches.

You just hit ‘edit info’ in the app and tap ‘Orientation’ to select the options that best fit you. Easy.

The new features will be rolling out in the US, UK, Canada, Ireland, India, and Australia throughout June.

Elie Seidman, CEO of Tinder, said: ‘We want all of our users to feel empowered expressing who they are while connecting with new people — and we’re always working to make that easier for our users on Tinder.

‘Dating apps are invaluable platforms for connecting the LGBTQ+ community, and we’re beyond proud to continue our efforts, in partnership with GLAAD, to improve the community’s experience on Tinder.’

Throughout Pride Month (that’s June, FYI), Tinder will also be offering free advertising on the app to nonprofit organisations dedicated to equality and acceptance for people across all genders and orientations.