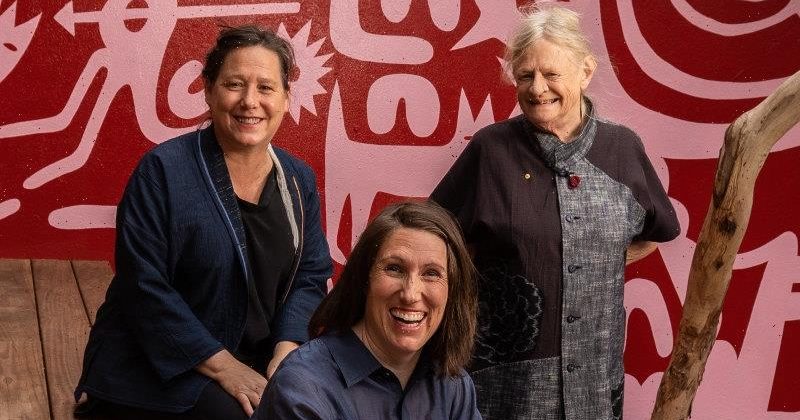 Not that long ago, the legendary La Mama Theatre was close to ruins. A fire caused by an electric fault ripped through the historic theatre in Carlton, engulfing artworks and artefacts, priceless ephemera, documents and diaries.

At the time, in 2018, long-standing artistic director Liz Jones vowed to rebuild the theatre, which had homed the company for 52 years, “somehow”.

The somehow has happened. Three years and $3 million later, La Mama has risen from the ashes and opened its new home on Faraday Street. 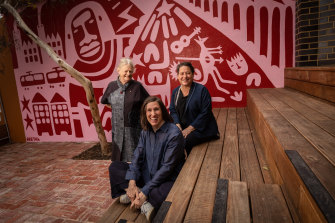 Three years on from a massive fire, La Mama has reopened, to the delight of (left to right) co-artistic directors Liz Jones and Caitlin Dullard and architect Meg White.Credit:Scott McNaughton

Support from the state government, philanthropic donors and the broader community helped La Mama hit its fundraising goal. The money has financed the restoration and rebuilding of the original building including new rehearsal space, a green room and artists’ space, a kitchen and shower and a mezzanine with a breakout room. The theatre is now wheelchair accessible and has solar panels and a water tank.

A new building for offices occupies the Shakahari restaurant side of the site and the front and the rear buildings are connected by a bridge. A colourful mural painted by Gumbaynggirr artist Aretha Brown adorns the forecourt.

Established in 1967 by Betty Burstall, La Mama was modelled on the off-off-Broadway scene, in particular the experimental theatre of the same name.

The main theatre, in the rear building which dates back to 1887, remains almost as it was before the fire. But behind the scenes, the technical infrastructure has been vastly improved. The relatively austere space can hold an audience of 34.

“A number of people have had the same experience as me, walking into that old space which is still so true, and just weeping. It’s so beautiful down there and it hasn’t been modernised, its integrity is intact,” Jones said. 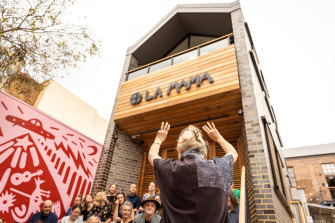 Liz Jones pays homage to the theatre at the smoking ceremony to celebrate the opening of La Mama on Wednesday. Credit:Darren Gill

“The philosophy has always been that that flexibility brings out the creativity in people. It really brings out something magical, which is why we were always committed to retaining that and all the little moments within that – the fireplace, the stairs – it really is what it was,” Dullard added.

Architect Meg White led the project with Cottee Parker Architects, working with Rob Cooke as project manager, and the Chroma Group as builders. Before she trained as an architect, White was involved with La Mama as a stage manager, a performer and a producer. The connection gave her an appreciation for the significance of salvaging materials from the fire. She would tell workers: “Those burnt theatre floorboards, Cate Blanchett has walked on them, so please take very good care of them.”

The result is a warm, simple, honest structure that honours the original and nods to its neighbours. The reopening comes as the theatre company prepares to celebrate its 55th anniversary next year. 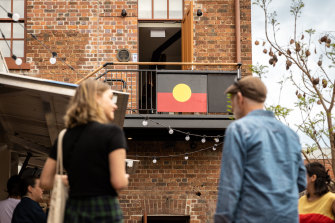 “It is living and it’s not finished and it will change and will be a place that will develop over time. Having a canvas on which to do that is the next chapter,” Dullard said.

Four two-week season shows, including a reimagining of My Brilliant Career, are slated for this year and the 2022 program will be announced next month. Jones said she was proud the La Mama team had been able to support those who lost work due to the pandemic. “Every artist who has not managed to perform as a result of COVID has been offered a space. We’ve managed to honour our community in that way too,” she said.

“New, exciting Australian creations and diversity will be central … It will continue as an artist-led space. We don’t have one particular idea, or a house style or a particular political drive. We actually are here to answer what our artists come up with and to facilitate the expression of that.”

As Burstall described it, La Mama is open to all comers: and so she is, once again.