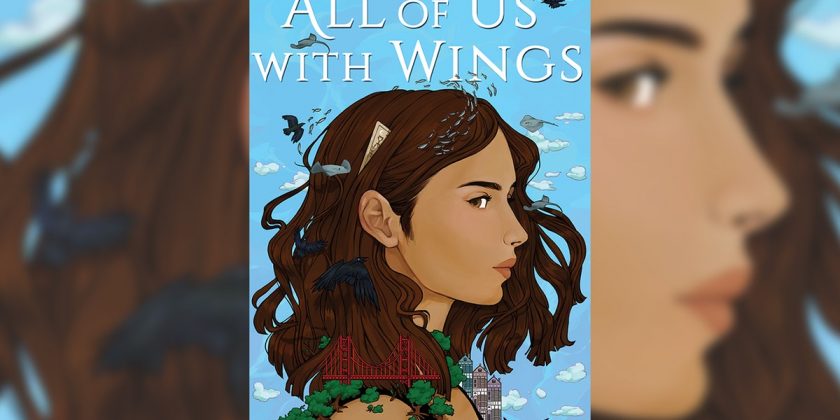 If you love YA magical realism, Latinx heroines, riot grrrls, Victorian mansions, and explorations of grief, heritage, and forbidden desires, you probably never thought you would get all of the above in one book. But believe me when I say that Michelle Ruiz Keil’s debut, All Of Us With Wings, is about to totally blow your mind. Bustle has the cover reveal and an exclusive excerpt from the book below!

Due to hit shelves on June 18, 2019, All Of Us With Wings follows 17-year-old Xochi, who loves her job as live-in governess for tween genius, Pallas. She is enchanted by the girl’s pagan rock star parents and the storybook Victorian mansion they share with their band, Lady Frieda. Xochi does her best to put Pallas’s needs before her own — ignoring the grief that lingers from her grandmother’s death.

Then, on the night of the Vernal Equinox, Xochi and Pallas perform a riot grrrl ritual that unintentionally summons ancient creatures. When her new life and past traumas collide, Xochi must save the mother who abandoned her and find a way to send the creatures home before the San Francisco fog extinguishes their fierce magic.

If that description hasn’t already had you adding this one to your 2019 must-read list, the stunning cover and excerpt below definitely will: 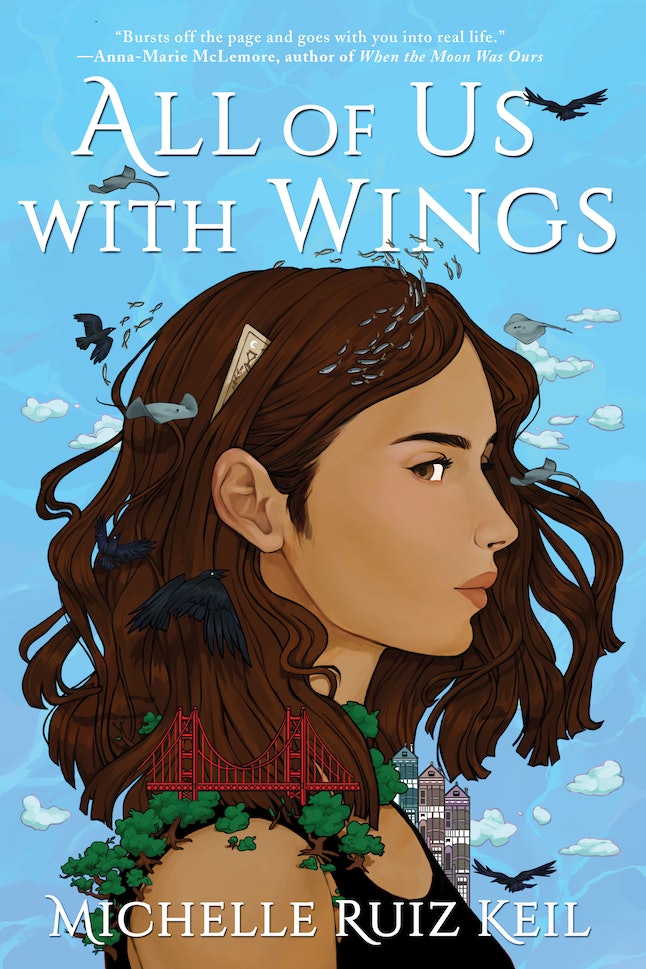 They dream of a girl

And heat and honey

How long have they slept in their aquifer nest?

Together, hands clasped, they begin to rise

“No one’s supposed to park back there,” she said. “Can’t they read?”

“Maybe they’re too tired.” Xochi yawned. “I mean, who starts a party at midnight?”

“It’s an afterparty.” Pallas swirled a perfect cursive P in the steam her breath had made on the window. “Midnight counts as after.”

“Midnight counts as bedtime.” Xochi downed the rest of her coffee.

Pallas had never had a bedtime herself, not even as a baby. Certainly not now that she was nearly thirteen.

She giggled. “You claim you’re not governess material, but listen to you— so prim and disapproving.”

Xochi rolled her eyes and reached over Pallas to pull back the lace curtain. Exhaust poured like fog from the old car’s tailpipe. “Who drives a hearse?”

Pallas sighed. She had a pretty good idea of who the boxy eyesore belonged to. “Some people get one song on the radio or open for Lady Frieda a few times and suddenly they’re above parking on the street like everyone else.”

She held her breath as the rusty behemoth lurched past the collection of vintage motorcycles parked behind the kitchen and shuddered to a stop. Four doors opened and five girls emerged. Like a line of paper dolls cut from the same pattern, they were thin and pale, with long white muslin dresses and waist-length blonde hair. They came in single file without knocking and passed through the kitchen without a word. The last one spared a head movement toward Pallas that might have been a nod and followed the others into the hall.

Rude, Pallas thought. But they were just bitter. That wannabe coven of undead schoolgirls had spent all of last summer trying to infiltrate Eris Gardens. They learned soon enough: sleeping with the band did not make you part of the family. Pallas slid off the counter with a thud. 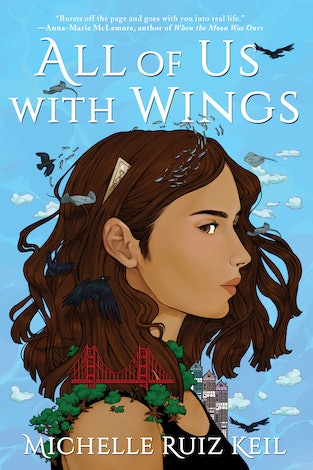 ‘All Of Us With Wings’ by Michelle Ruiz Keil

“Just a band. Filles Mourantes,” Pallas said. “Dead Girls. They sing in a made-up language and never eat. They want people to think they’re, like, vampires or Parisian or something.”

Pallas wasn’t about to admit that their music was actually good. It was easier to have compassion for the not-so-gifted who tried to make up for it with attitude, but those attractive, talented girls had no excuse for being mean.

“They’re gorgeous, though,” Xochi said. “And those dresses are amazing.”

“Please. “You’re way prettier.” Pallas opened the industrial-sized refrigerator, the only modern thing in the large, drafty kitchen, and took out a platter of sushi and a bowl of chocolate-covered strawberries — Equinox food. “And your hair is perfect, especially with that dress. I’m so glad you listened to me and Kiki.”

Xochi touched her newly bare neck. “It’s not too short?”

“Of course not!” Pallas’s godmother Kiki had bobbed Xochi’s hair perfectly. And this after magically producing a sparkly ashes-of-roses flapper dress for the governess when Pallas had worried Xochi wouldn’t have anything nice to wear for the concert. The dress had once belonged to Pallas’s mother – Io was too thin for it now, but it fit just right on Xochi. She looked so glamorous.

Like a storybook governess, Xochi was from a small, uneventful place where the most exciting happenings were potlucks and school dances. Although she was almost eighteen, she had never been to a real concert, let alone an afterparty for one.

Pallas sighed. It would be selfish to keep Xochi cooped up in the attic all night reading.

She took a deep breath. “You know,” she said, “you could stay down here and check out the party. If you want.”

“I thought we were finishing Villette.”

Taking turns reading their favorite books aloud had been Pallas’s idea; she’d chosen Villette because of its governess heroine. Xochi was usually into the story as much as Pallas was. But tonight, there was a tiny hint of reluctance in her voice.

Before Pallas could answer, a disgruntled yowl sounded from the patio.

“More vampires?” Xochi’s eyes were brighter now, the way they always got when her coffee kicked in.

“Not this time.” Pallas hurried to open the back door. “Just one grumpy old sphinx.”

Peasblossom strolled in, looking pleased with himself as usual. Pallas reached down to pet him.

“Wait a minute,” Xochi said. “Is that the bookstore cat?”

Pallas couldn’t help but laugh at the look on Xochi’s face. “He comes over to keep me company during parties.”

Peas trotted past Xochi and leaped to the counter, suspiciously close to the covered party platter of sushi.

“In your dreams!” Pallas scooped him up and set him back on the floor. His tail twitched. “Nora said no sushi — it gives you gas.”

“But how does he know when there’s a party?”

The front door banged. Laughter. Voices. The thud of music gear. The mayhem was about to begin. Pallas steeled herself. It wouldn’t be so bad now that Peas was here.

She feigned a big yawn, put a few pieces of sushi into her Hello Kitty bento box, and looked down at Peasblossom, her best and oldest friend. “Come upstairs, hungry thing. Maybe I’ll give you one bite of my yellowtail.” To Xochi, she said, “Reading’s going to be pointless when the music starts. Why don’t you go freshen up your lipstick? You should experience the full catastrophe at least once. In the morning, I’ll say I told you so.”

Xochi’s eyes narrowed. “Are you sure?”

Now it was Pallas’s turn to roll her eyes. Of course she was sure. Wasn’t she? She’d always loved the feeling of being alone in her attic bedroom during a party. She’d imagine her bed was a ship in a storm or Dorothy’s house spinning through the tornado toward Oz. That kind of imagining was harder these days; she wasn’t sure why.

“Totally sure! I’ll probably just go to sleep.” She yawned again, this time for real. She was tired. And honestly a little peopled out, as her mother would say.

From somewhere in the front of the house, a speaker made a catfight screech, putting Peasblossom’s fur visibly on end.

“You can sleep through this?”

Pallas shrugged. “I have earplugs. I’ve been at this since I was a baby, you know. Every Solstice and Equinox and Samhain and Beltane—a concert, a big afterparty. I have it down to a science.”

“Maybe I’ll just go check it out for a minute…” Xochi was already pulling the red lipstick Kiki gave her from the pocket of her leather jacket. She looked so beautiful with her warm brown skin and minky waves. The kind of girl flapper dresses and fishnets and combat boots and leather jackets were made for.

“Come on, Peas,” Pallas said, heading for the attic staircase. She bit her lip against an absurd welling of tears. There was no reason to be upset. Nothing was different about this Equinox from any other — nothing except Xochi. And now that Xochi was going to the party and Pallas was alone, nothing was different at all.