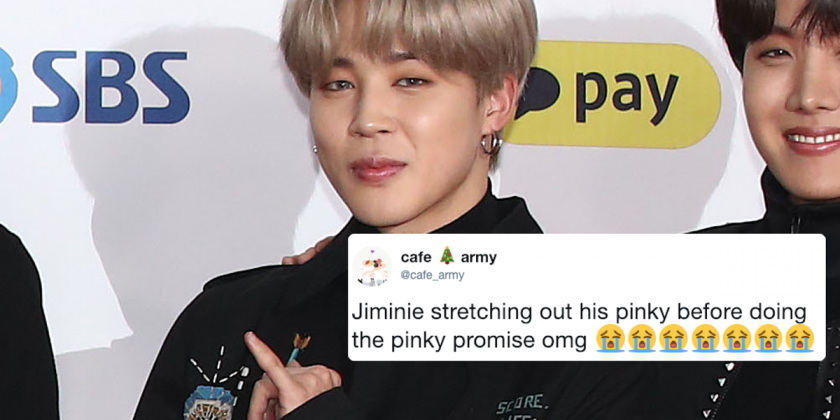 It is a truth universally acknowledged that Park Jimin of BTS has the cutest hands on Earth. That is not an exaggeration. It is simply a fact and I’m not here to debate with you. Jimin’s hands are a world wonder and they must be protected at any cost. Why, you ask? Well, all you have to do is watch the video of Jimin from BTS stretching his pinky before making a promise to understand the level of adorable Jimin’s hands are on.

BTS, the hardest working boy band in the biz, was hard at work on Christmas day. While you were sitting opening presents in front of your Christmas tree, they were hitting the stage at SBS Gayo Daejun, a televised Korean music festival that takes place annually on Christmas. This year, besides BTS, the event was packed with K-Pop’s biggest stars, like GOT7 and EXO. As for BTS, they brought the house down with a medley performance of some of their biggest hits since their debut in 2013, leading up to a riotous performance of their current single. The lineup included: "NO more Dream" (2013), "Boy in Luv" (2014), "Dope" (2015), "Fire" (2016), "DNA" (2017), and "IDOL" (2018).

And while their performance gave BTS fans all the nostalgic feel-good vibes, we’re here to talk about Jimin’s pinky-pulling. As I already mentioned before, Jimin’s hands are all types of adorable, with his itty-bitty pinky being the cutest part. Obviously, fans are constantly melting over his hands, but even Jimin’s bandmates, Jungkook, V, RM, Suga, Jin, and J-Hope, can’t stop from cooing over them every once in a while.

Need a visual? Here are some videos of V comparing his pinky to Jimin’s, because it’s something he enjoys doing often. (WARNING: These videos may make your heart burst.)

The other members are known to get distracted by his hands, too, because they’re that adorable.

Sometimes, fans even ask to compare their pinkies to Jimin’s at fan signings.

Considering how much attention his adorable hands get, can you blame Jimin for sometimes wishing he had a normal pinky that wasn’t liable to knock fans out on sight with their extreme levels of cuteness?

As a result, Jimin has picked up the habit of "stretching" his pinky. Here he is about a year ago stretching his pinky before comparing it to a fan’s.

It’s unclear if Jimin actually thinks this method of stretching his pinky works or if it’s just a joke. But while walking the red carpet at SBS Gayo Daejun on Dec. 25, Jimin mentioned "keeping promises" to fans in 2019 during an interview, which led the band to do a pinky promise pose for the cameras.

Well, imagine fans’ reactions when, before lifting his pinky finger for the cameras, Jimin tugged on his pinky to "stretch" it! They were struck through the heart with UwUs. You could practically hear ARMYs cooing all across the globe. Check out the moment, and Twitter’s reaction, below.

Jimin stans everywhere know Jimin’s hands are perfection the way they are (especially his little pinky). But just because his itty bitty pinky is cute as hell does not mean Jimin can’t smolder his way across the stage with the best of them. I mean:

Oh, what was that you were saying about Jimin’s smol, adorable pinky? All I see is unrealistic levels of HOT in those videos.

Let’s just all agree Jimin’s duality is one of a kind.