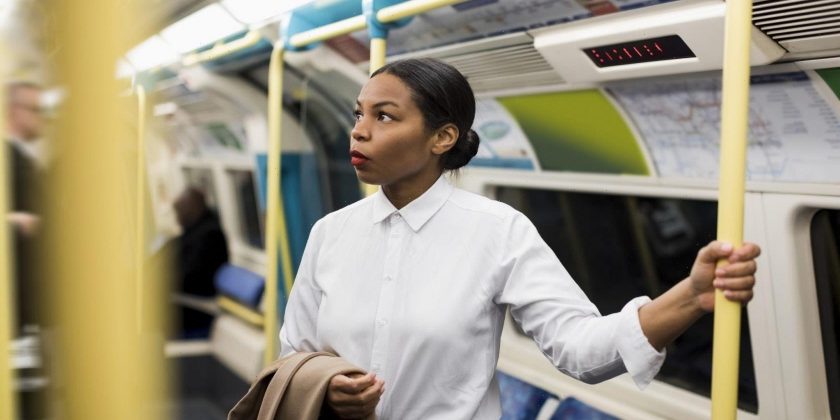 No one likes spending time on the Tube – especially when the weather is hot. But what is it about public transport that has the capacity to turn us into the worst versions of ourselves? Stylist investigates.

Before we get into any of this, I’d like to say one thing: I am generally a nice person. I step aside to let people through doorways, I smile at the barista in the coffee shop and I fetch my colleagues a drink when I’m getting one. I like to assume the best in people. Glass half full and all that.

All that considered, there’s one place which demands an exception to the ‘nice Lauren’ rule. One damned place where, instead of seeing the best in the world, I assume the worst. Where my empathy flies out the window. Where the devil on my shoulder wins.

That dreaded place I’m talking about is, of course, public transport. As soon as I step through the doors of a train, bus or Tube, it’s like a switch goes off in my brain. My tolerance for any frustration or upset is gone. The smallest thing will make me unjustifiably angry – especially when its hot.

I’m not the only one who feels that way. It’s clear to me – through conversations with my friends, family and colleagues – that I’m not the only person who has been left feeling ashamed of my behaviour on public transport.

Whether it’s raging at people who don’t move down enough on the Tube or hogging the seat next to us on the bus with our bag (and getting unreasonably frustrated when we’re asked to move it), we’ve all had those slightly shameful moments where our tolerance goes out the window.

Public transport: “Whether it’s raging at people who don’t move down on the tube, or hogging the seat next to us on the bus, we’ve all had those moments.”

But why are so many of us feeling this way? The answer, it seems, lies deep in our psychology – in a behaviour psychologists call “non-social transient behaviour”.

“Public transport can bring out the worst in us as we are often dealing with rush hour conditions packed buses or trains and queues of people. This is stressful – especially if we are running late,” says Dr Sarah Brewer, medical director of Healthspan.

“Psychologists have referred to this as ‘non-social transient behaviour’ – we are surrounded by strangers who we don’t need to impress and will probably never see again, so our natural frustration from being crowded and in an enclosed space comes through.”

She continues: “We become socially disengaged and can act in ways that we wouldn’t dream of doing in other situations, pushing and shoving to get away from the crowds and to find some personal space. This also leads us to try and ‘hog’ the seat next to us on a bus or train and take measures to stop someone else sitting there.”

Dr Mark Winwood, director of psychological services at Axa PPP Healthcare, agrees, referring to another concept called “deindividuation” which causes us to lose our sense of self.

“Our stress response is often associated with the experience of threat – and our natural threat response may mean we can become more aggressive in these situations on public transport,” he explains.

“From a psychological perspective, in these situations you are usually surrounded by strangers, and so there’s a sense of anonymity involved here. So-called deindividuation refers to a loss of self-awareness and, along with it, individual accountability. It’s born from the perception that you are beyond reproach, which can lead to more aggressive and less inhibited behaviour.”

Public transport: does our lack of accountability make us more likely to let our anger get the better of us?

It seems, then, that a lack of accountability is to blame for our out-of-character behaviours. In the knowledge that it’s very unlikely we’ll ever face the people we meet on public transport again, we throw any and all expectations of “politeness” out the window, in favour of a more straightforward approach.

Of course, there are a few things we can do to channel our frustration in other, more constructive ways. Calm yourself down with a relaxing podcast series, spend your commute with your head in a book or pick up a copy of your favourite magazine, so you’ve got something (anything) else to focus on. It’s a lot better than nurturing a quiet rage by staring at the person manspreading two seats down. Trust us.

This article was originally published on 11 December 2019, but has been updated throughout.