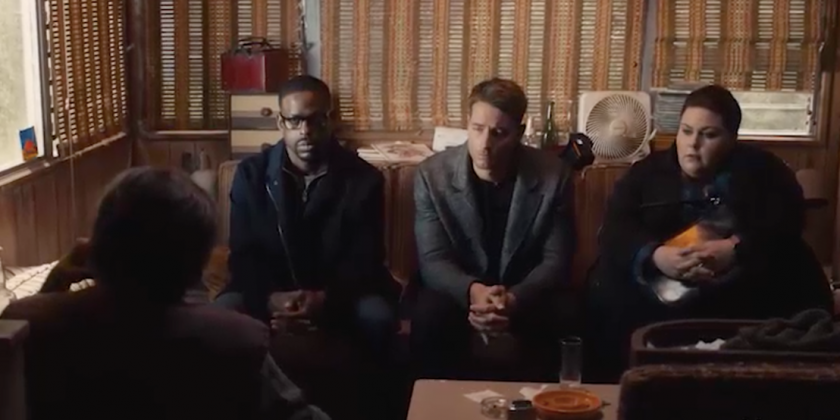 Kevin, Randall, and Kate — also known as The Big 3 on This Is Us — have been through a lot. There are enough secrets in their lives to fuel a season of Downton Abbey, and for the most part, they are semi well-adjusted adults. And now, Kate, Randall, and Toby have confronted one of the biggest secrets ever — their Uncle Nicky. Jack’s brother was not killed in Vietnam on This Is Us, and Jack hid Nicky from his family until his death. No one knew, and now, the Big 3 has a lot of questions that may never be answered.

Flashbacks on This Is Us have shown just how hard Nicky took the war — he was a medic, in his own words, getting high off his own supply — and the screws just slowly started to come loose. Jack enlisted just to help Nicky get clean and get out of Vietnam, but after Nicky accidentally kills a village child, Jack declares himself “done” and abandons his brother. They did meet one more time before Jack’s death, but Jack never forgave Nicky for what he did. Viewers know that Nicky was just having fun with the boy before the accident happened, but he never got to explain to Jack what really happened that day in boar, and Jack shuts down and turns away from him.

Nicky lives every day with the guilt of his actions, but what’s so surprising about Jack and his total condemnation of his brother is that the Jack that we know would never, ever cast someone out. The Jack Pearson portrayed on This Is Us so far is the guy who is always ready to give someone a second chance, but the Jack that we didn’t know, well, he was more complicated. For being the king of the benefit of the doubt, Jack wouldn’t let Nicky get a word in edgewise when they met just a few years before Nicky’s death.

As Miguel tells Rebecca, Jack had a darkness to him that he never wanted to let out. Nicky was part of that darkness, and it’s probably why Jack kept him a secret for all of these years. One thing bigger than Jack’s “darkness” is his martyr complex, so perhaps Jack thought that, because Nicky didn’t get better, he was also somehow responsible for the child’s death.

One thematic moment in the episode was the idea of the son correcting the father’s ills — Jack tells Kevin that it’s something he’ll have to do when he’s older, and that’s why Kevin, after meeting Nicky, decides not to leave Nicky behind to suffer in his guilt. Nicky is lucky that Jack’s progeny opted to take him in, to let him explain, to wipe away his tears, unlike his brother did. This will directly affect the rest of the Pearsons and their own knowledge of their family, says creator Dan Fogelman. "We have a big story coming that relates not just to Jack and Nicky, but also to Jack’s grown children," he told Deadline. "Kevin’s journey of discovery continues when we come back and starts folding into the rest of the family."

The only way the family will be able to heal is to open up the scars from that time period and let as much truth come out as possible. There are so many more questions now into Jack’s mindset and why he decided to excommunicate his brother, but at least The Big 3 can start to make it right on This Is Us.