‘That’s why we want to make something incredibly fun but also provide trans people with peace. This event uses partying and clubbing as a form of resistance, while giving everybody space to breathe and be together.’

As Creative Director of queer performance company, Milk Presents, the event Leo is talking about is Trans Filth & Joy, the opening performance for Manchester Pride, which kicks off today.

Explaining where the idea came from, Leo says that the aim was to create a queer dance party ‘that is uplifting and celebratory, and celebrates trans people on our own terms.’

But while party-goers can expect to be entertained by an evening packed with DJs, drag, burlesque, cabaret, activism and music, exactly what will happen on the night remains an exciting mystery.

‘I’d love to tell you, but I don’t know what’s going to happen – we chat to the artists, give them the theme and literally just get the party started,’ says Trans Filth & Joy fellow organiser Kate O’Donnell, Creative Director of Trans Creative. 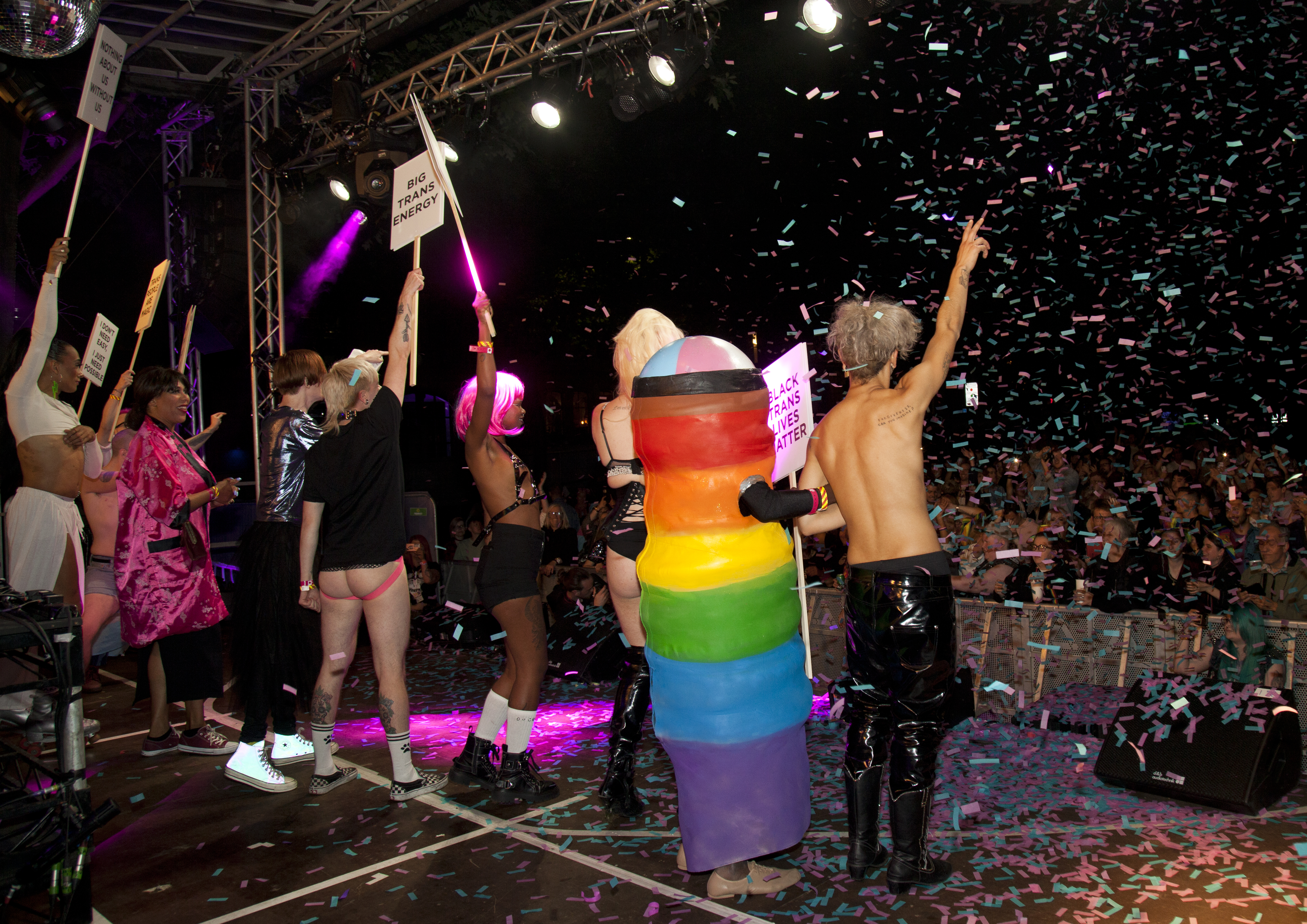 According to Leo, who goes by the pronouns they/them, what can be assured is that as well as being an entertaining event for trans people, it will be safe and supportive, too.

‘Creating a space which is really fun and affirming feels incredibly urgent and important right now,’ they explain.

‘We want to give trans people and their friends – but in particular trans and non-binary people – space to relax, be free and feel wonderful about themselves,’ adds Kate.

For her, having Manchester Pride champion the trans community in this way is a huge step in moving further towards positive visibility and representation.

‘They’ve put us right at the front,’ she explains. ‘They’ve done some really brilliant grassroots stuff this year, with some elements of risk. They handed the programme to us.’

Leo continues: ‘Manchester Pride has let us run with what we want to do. They’ve provided resources and let us do everything else.

‘They drew the line at pyrotechnics,’ they joke, ‘but we told them we wanted to throw a night that was filthy and fun, and they said, “cool”.

‘Over the last few years there’s been a growing number of amazing Trans Prides that don’t rely on corporate sponsorship and are really community-driven. It’s great we have our own Pride events and can also be part of this one with our siblings in the LGBTQIA+ community.’

Kate explains that she began creating trans-specific art and theatre when she couldn’t find it herself.

Having first come out at the age of 16, and as a gay man, in 1981 at the beginning of the AIDS crisis, she says, ‘I feel like I’ve been coming out most of my life.’

However, it was in the early 00s when Kate started to transition. ‘It became very clear I was trans and not a gay man,’ she explains.  ‘I felt ready because of the experience I had as a young gay man, [but] transitioning in the early 00s, there was no community.

‘It was very underground. You couldn’t just attend a Trans Pride event. It felt very difficult and isolating.’

So much so, it inspired Kate to set up the Trans Creative arts company in 2016, and a year later, Manchester’s first trans arts festival Trans Vegas, which platformed 300 trans voices in its debut year.

Since then, she has also directed Transpose at the Barbican two years running and regularly speaks on panels and made guest appearances on the Guilty Feminist podcast at the live shows. In 2018, Kate was nominated for the Gay Times Arts and Culture Award.

‘There must have been stuff out there, but as a 50-year-old trans woman, I didn’t see me on stage. And you can’t be you if you can’t see you,’ she says.

‘We talk about the importance of telling our own stories, but our stories were being told by people who aren’t trans, which led to narratives that constantly portrayed trans people’s lives as tragic or over-sexualised.

‘Some of the work we do now around visibility is so important, creating spaces where people can just be out rather than have to “come out”.

‘It’s really exhausting and frustrating to hear about the lack of resources and support for us, and to feel like we have to be debated.’

It’s something South Asian trans drag artist The BollyWitch, who is performing as Trans Filth & Joy, can relate to, having transitioned in the Muslim community during the 90s and 00s.

‘I started drag in 2019 because I wasn’t seeing enough brown representation in drag that reflected Indian culture,’ she explains. ‘I wanted to elevate Bollywood performance to a place people hadn’t seen it, taking both these parts of me to create Bollywood horror drag.’

However, this didn’t come without prejudice or backlash.

‘I was told you can’t be Indian and queer, or Asian and trans. [The BollyWitch] was my way of putting a finger up to anyone who’s said that, and creating something amazing. It just took off from there,’ she says.

‘With something like Trans Filth & Joy, I love that trans creators can be uninhibited and say: “This is trans power. This is trans sexuality”. It’s another level. We can reclaim the power of our sexuality, be sexual and not have to be apologetic about it.

‘The stigma around sexuality doesn’t just face trans people either,’ adds The BollyWitch. ‘Being a brown or South Asian woman – regardless of whether you’re queer – is stigmatised. So for me to be an open, South Asian trans woman on that stage, I’m really excited to bring that.’

With its radical and progressive history, from the suffragettes to early city-wide protests against Thatcher’s homophobic Section 28 law, Manchester feels like a natural home for resilient and inclusive trans performance.

We deserve to be there, just like everybody else

‘Manchester is where I found a tight group of trans friends,’ Leo explains.

‘When I was very young my village ran a music hall, essentially a cabaret, and I think that’s where my love for the form started – although I don’t remember anyone queer. I wasn’t aware of trans and non-binary people at all for a long time, and that’s really different now.

‘When I first moved here, I didn’t know any trans people at all. Now I have my trans family, and I hope that queer and trans people who come to Trans Filth & Joy may find theirs too.’

‘The actual queer community itself in Manchester is beautiful, including some amazing queer artists and performers,’ adds The BollyWitch.

Despite this, prejudice sadly still exists within the community.

‘Many people have been confronted with racism and transphobia,’ The BollyWitch explains. ‘That’s why I created my own event, A-POC-OLYPSE cabaret, which centres queer performers of colour in Manchester. And I launched it in the Gay Village because we deserve to be there, just like everybody else.

‘Every day someone tries to remind me that because I’m trans, I’m not on the same level as them. It’s sad. But you have to choose your battles, and what’s stronger than fighting back is celebrating who you are and putting your energy into the world, because that’s what they’re trying to stop you from doing.’

At a time when over half of trans people in the UK have had suicidal thoughts, while more than two in five trans young people have attempted suicide, inclusion at any level can be game-changing.

So what more can be done?

‘It’s not a time to just be okay with trans people,’ Kate says. ‘It’s a time to work toward being anti-transphobic.

While we celebrate 50 years of Pride this year, Metro.co.uk is shining a light on two charities that offer life saving support to the LGBTQ+ community – and asking readers to please donate whatever you can to help them both continue to help others.

Our first charity is Kyiv Pride. With the war still raging in Ukraine, the safety of the LGBTQ+ community is under threat now more than ever.  In recent months Kyiv Pride has opened a shelter which provides emergency accommodation to LGBTQ+ people left homeless or penniless by the fighting, especially for those with families who do not accept them. They have also supplied food, money and support to people who have no one else to turn to. But they still need to do more to keep their LGBTQ+ community safe.

Here in the UK, akt is a charity that supports LGBTQ+ people aged 16-25 who are facing or experiencing homelessness or living in a hostile environment. With 77% of LGBTQ+ young people the charity works with believing that coming out at home was the main factor in causing their homelessness and an increase of 71% of people accessing their services in the last year, their support is vital in helping turn their lives around.

Metro.co.uk appreciates that the cost of living has impacted everyone and money may be tight, but if you are able to make a donation and help change someone’s life both here and in Ukraine, you can do so here.

This year marks 50 years of Pride, so it seems only fitting that Metro.co.uk goes above and beyond in our ongoing LGBTQ+ support, through a wealth of content that not only celebrates all things Pride, but also share stories, take time to reflect and raises awareness for the community this Pride Month.

And we’ve got some great names on board to help us, too. From a list of famous guest editors taking over the site for a week that includes Rob Rinder, Nicola Adams, Peter Tatchell, Kimberly Hart-Simpson, John Whaite, Anna Richardson and Dr Ranj, as well as the likes of Sir Ian McKellen and Drag Race stars The Vivienne, Lawrence Chaney and Tia Kofi offering their insights.

During Pride Month, which runs from 1 – 30 June, Metro.co.uk will also be supporting Kyiv Pride, a Ukrainian charity forced to work harder than ever to protect the rights of the LGBTQ+ community during times of conflict, and youth homelessness charity AKT. To find out more about their work, and what you can do to support them, click here.