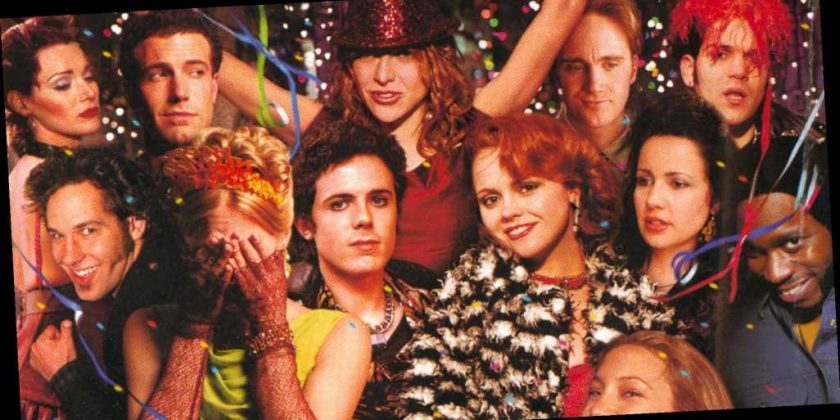 It isn't personal. In fact, one of my best friends once offered to buy it from me, and I told her the same thing that I am telling you : Absolutely not, get out of my apartment.

It's not the money that I am worried about, although a used DVD of the film is currently selling for $265 on eBay. And it isn't the movie's highly elusive status that concerns me, although it isn't available for rent or on any streaming platforms and never shows up on TV.

It is that this star-studded, fabulously costumed, expertly scored, under the radar cult classic comedy is really freaking great, and if I give it to you then I can't watch it. And I watch it all the time. Set on New Years Eve in 1981, 200 Cigarettes follows a handful of characters for one night in New York City. They go on bad dates, they drink, they get into arguments, they eat various types of food, and eventually all end up at the same party. This journey is paired with songs from Blondie, The Ramones, The Go-Go's, Elvis Costello, Nick Lowe, The Cars, and many many more. Released in 1999, many of these actors were just achieving stardom or on the brink of it. A year earlier Ben Affleck had won an Oscar for Good Will Hunting. A year later, Almost Famous would make Kate Hudson a household name. As a result, many scenes truly shine. A conversation between Dave Chappelle and Janeane Garofalo in a cab is perfectly magical (and mostly ad libbed by the two comedians, according to Garcia). Martha Plimpton's downward spiral as a party host with no guests is brutally funny.

But this ensemble comedy has more going for it than just a bunch of recognizable faces. There are also clothes so colorful, so hip, and so fun, that they should be happily worn today and forever. Costume designer Susan Lyall, whose wardrobe expertise can also be seen in Empire Records, goes all out with bright faux fur coats, giant chunky accessories, and phenomenal shoulder pads. Paul Rudd has mutton chops so pronounced that they should have had their own film credit. Martha Plimpton wears a pea-green dress with a yellow tulle underskirt and lace fingerless gloves, an outfit dubbed "god awful" by another character and truly is, but in the most magnificent way.

Surprisingly, this gem of a flick did not receive good reviews when it was released, and barely broke even at the box office. Roger Ebert called it "dreadful". But for us passionate Cig-Heads, a term I just made up, this reception is puzzling. The film is fun, sarcastic, and a little weird. There are great one-liners and shots of New York streets that preserve a grimier moment in time. And, ultimately, it is a New Years Eve movie, a holiday sorely in need of better film representation.

In speaking with Garcia, she suggests there might be several reasons why the movie wasn't a big hit. There were different ideas about marketing, and with all the star power it may have been overhyped. It was also misguidedly compared to other ensemble films like American Graffiti and Car Wash, possibly setting different expectations. "It is just a little movie," she says, "a quirky off-beat fun romp." Garcia admits there are some things she would do differently if given the second chance; Elvis Costello wanted a darker score, Martha Plimpton and Courtney Love wanted edgier tones. But the movie hits all the right notes for those of us who get it. Garcia points out that it is particularly popular among women, which makes sense considering the movie's strong female characters and that it was written, directed and produced by women.

More than twenty years after the release, all the hype and comparisons have faded and 200 Cigarettes has found a quiet second life. It's become an underground delayed hit – a cult classic that most people have never heard of and can never find.

Garcia is aware that the film has no streaming presence (although she is not quite sure why) and that limited quantities are incredibly expensive. In response to my not-so-subtle nudging, she promised to follow up with Paramount and get to the bottom of the mystery, considering how many requests she gets every year around December 31.

But until then, no, you can't have my copy. Maybe you can borrow it if you promise to handle it with great care. And look, I'm not trying to be weird about this, but some sort of gloves might not be the worst idea?

You know what, maybe just safer to leave it here with me.