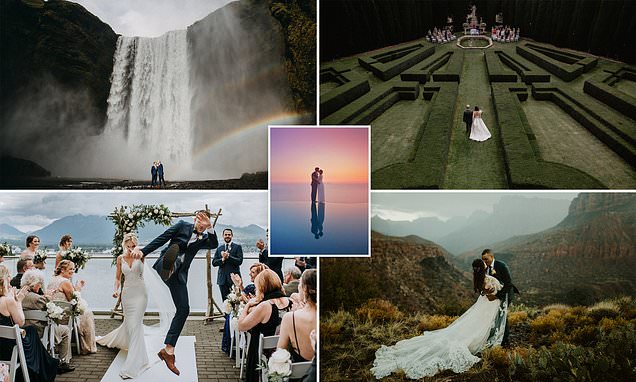 Weddings with wow-factor! Photos of a ceremony in a maze and a first kiss by a thundering waterfall are named among the best in the WORLD in stunning annual competition

Everyone wants their wedding photos to be extra special – but there’s no need for luck or a good angle when you have views as picturesque as these.

These stunning wedding images have been pronounced the best in the world for 2018 – and it’s no surprise to see why.

Each year Junebug Weddings selects the top 50 wedding photographs from around the world – and this year there were around 10,000 entries to choose from.

The stunning final selection includes aerial shots in snow-covered woodland, a ceremony in a maze in Siena, Italy, silhouetted couples in front of the Milky Way – and plenty of happy tears. 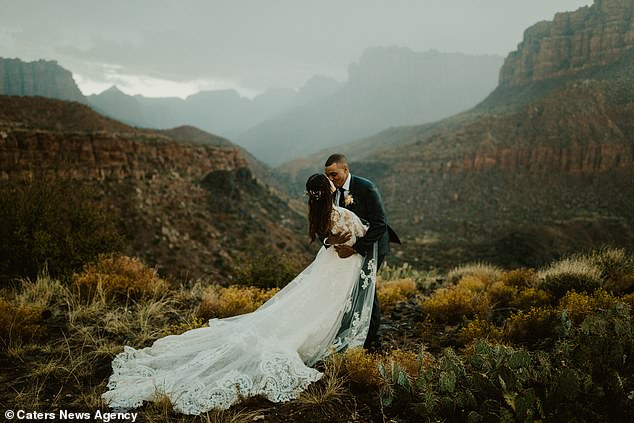 Every year, Junebug Weddings selects the top 50 wedding photographs from around the world – and it’s no surprise this stunning picture made the cut. This talented photographer captures the moment a happy couple kiss among the breathtaking backdrop of  several mountains in Zion National Park, Utah 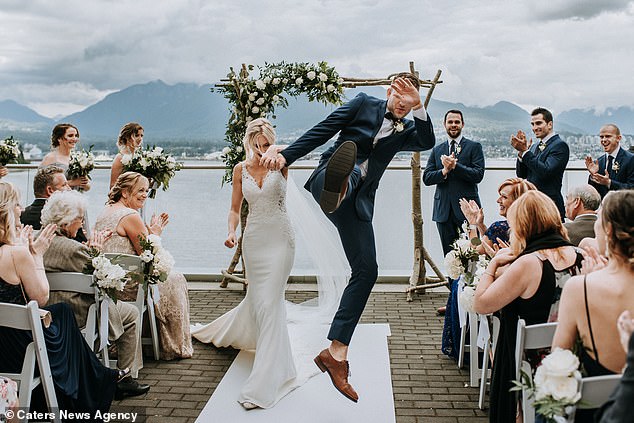 Jumping for joy: This moment over a mountain was captured by a Vancouver wedding photographer in Canada as guests applaud in delight 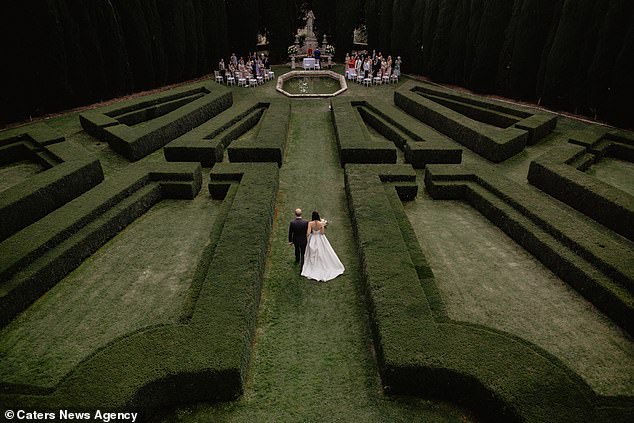 A-maze-ing: This couple definitely won’t get lost in this giant puzzle as they hold hands in a maze as their nearest and dearest watch on from their seats  at the Tera Di Siena maze in Italy 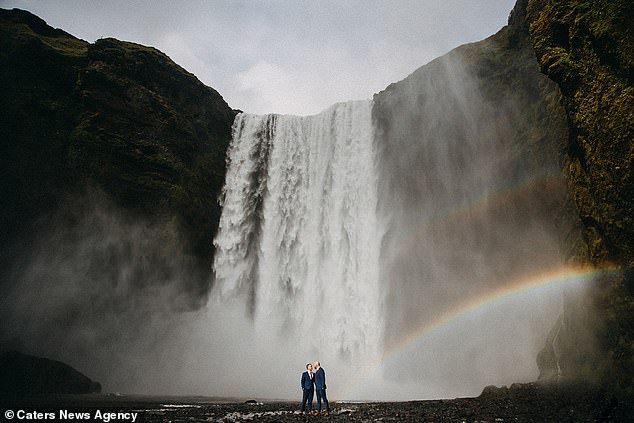 A pot of gold: This happy couple have hit the jackpot, as not only are they lucky enough to pose in front of the impressive Skógafoss waterfall in South-Iceland, but a magical and colourful rainbow also formed just in time 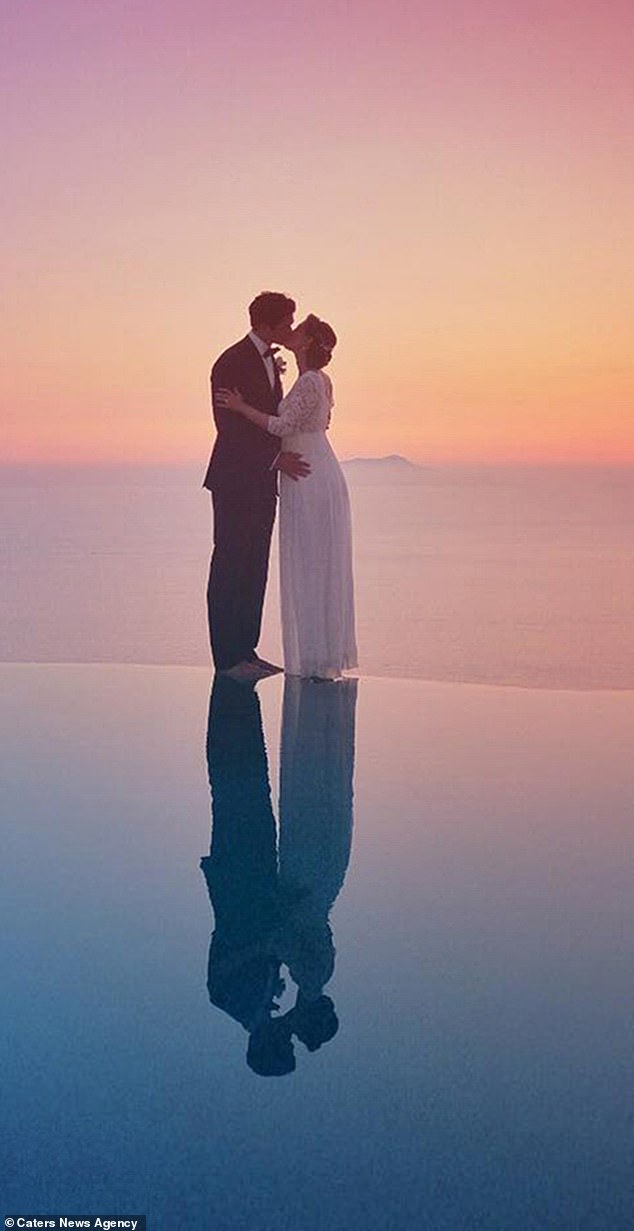 Seeing double: This artistic shot captured the couple’s reflection as they locked lips during a romantic sunset at Massalubrense in Campania, Italy

Junebug Weddings has been running the contest for 11 years, and the judging for the final selection requires multiple rounds.

First, all images are anonymised and the judges, made up of three world-renowned wedding photographers,  The Twins, People Truelove Tellers, and Anni Graham, review them individually.

Then, the images are cut again and again, before a Top 100 list is set to be narrowed down to the final 50.

‘We have to be mindful that one photographer does not win more than once, that different cultures, love, and photography styles are represented, and that the final collection has a good mix of the different elements of a wedding day: getting ready, the ceremony, the tears, the celebration, and so on,’ said Carrie Schwab, editor-in-chief at Junebug Weddings.

‘A great wedding photo attracts us with composition, use of light, and technical prowess, but it’s the emotions behind the moment captured that really connect us to an image.’ 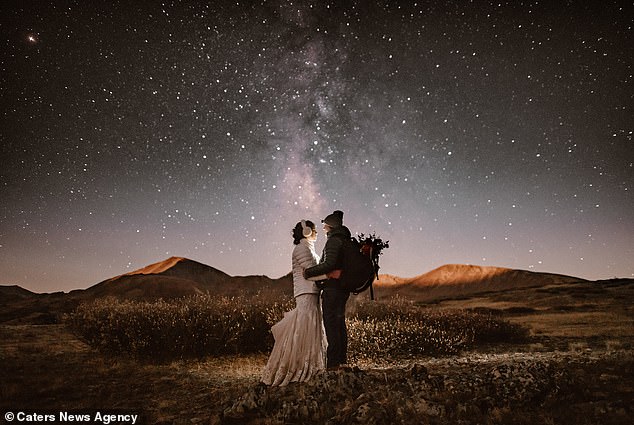 Starry-eyed: This romantic shot shows a wrapped-up couple interlocking arms as they gaze into each others eyes before a spectacular night sky 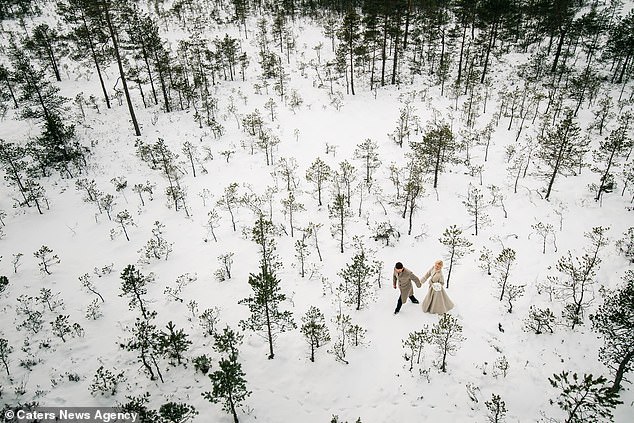 Snow happy: This whimsical wedding picture captures the newlyweds walking hand-in-hand through a snow-covered woodland and it looks just like a scene straight out of Narnia 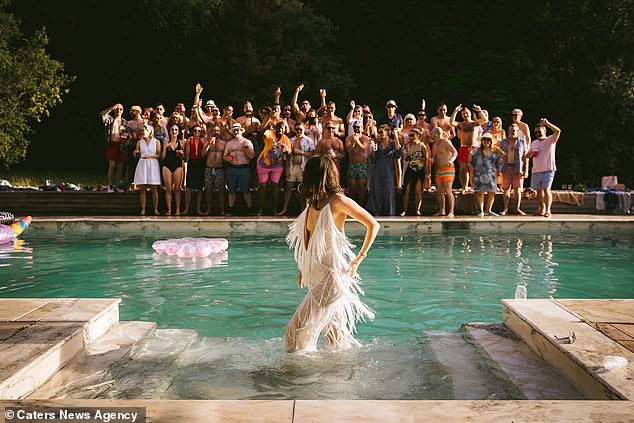 Strike a pose: This new bride poses with her hand on her hips as she steps out of a swimming pool in front of her cheering wedding party – who look as if they’re also ready to take a dip 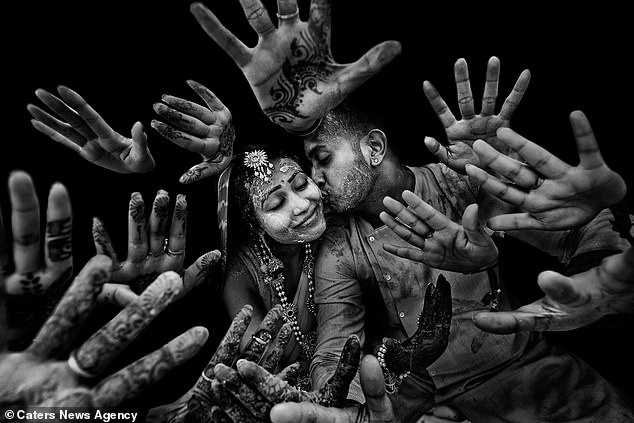 All hands on deck: This clever shot shows a happy bride dazzling in diamonds and shutting her eyes in glee as she receives a loving peck from her other half 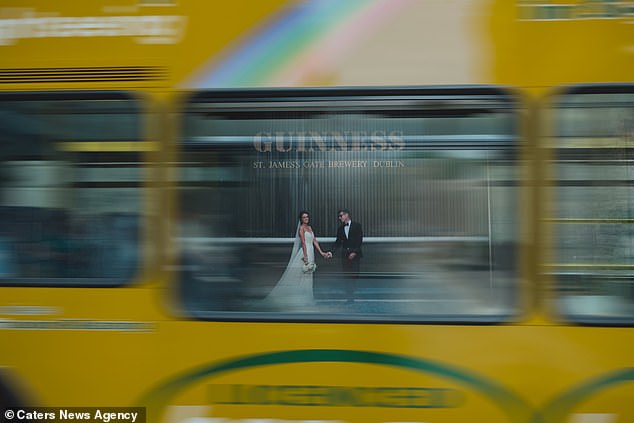 Moving too fast: This clever images reflects the couple’s whirlwind wedding day as their photo outside the Guinness factory in Dublin, Ireland, is caught through the window of a moving bus 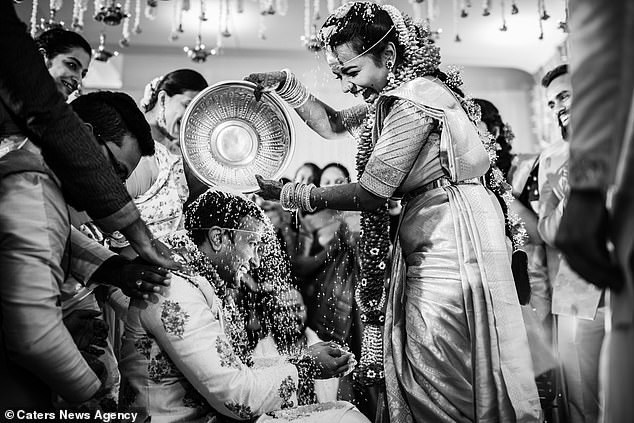 All smiles: This professional snap catches the moment the bride pours water over the groom’s head during their intimate wedding ceremony 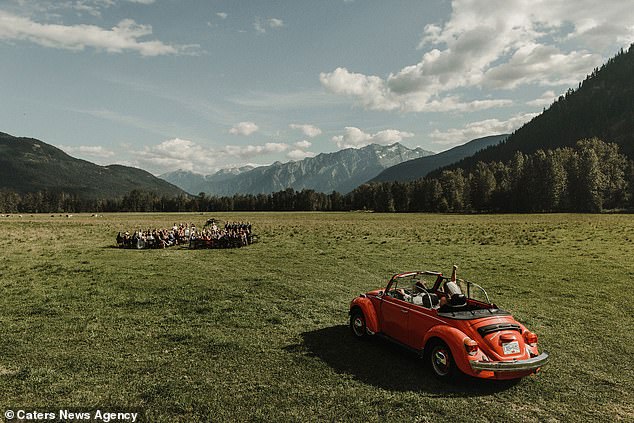 Natural beauty: Following their elopement, these newlyweds drive across an impressive and somewhat cloudy landscape to greet their awaiting guests 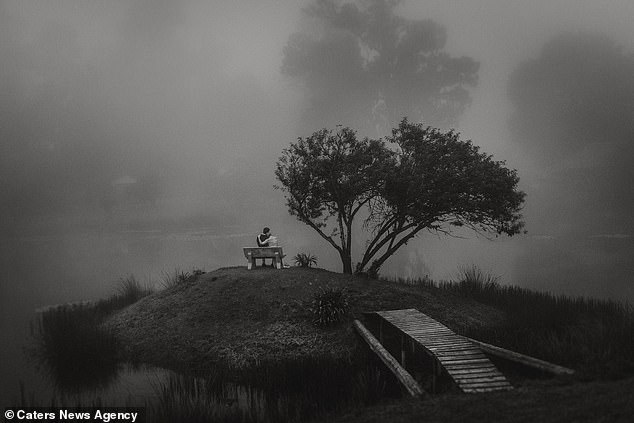 Whimsical: This black and white photograph captures a couple sitting on a bench overlooking a misty and eerie lake following their wedding reception 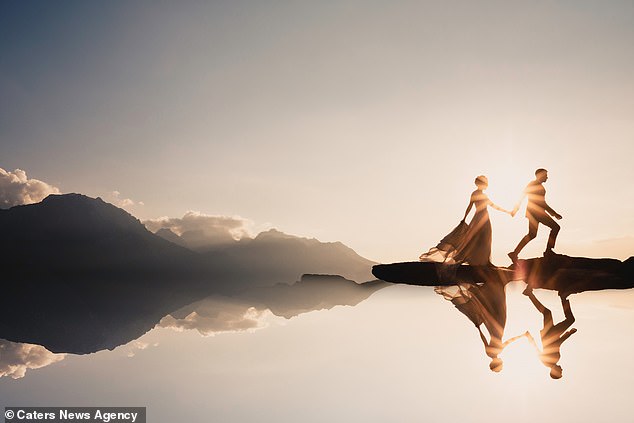 A step into the future: This silhouette of a couple shows them carefully stepping over the mountain rocks as they walk into their happy future together 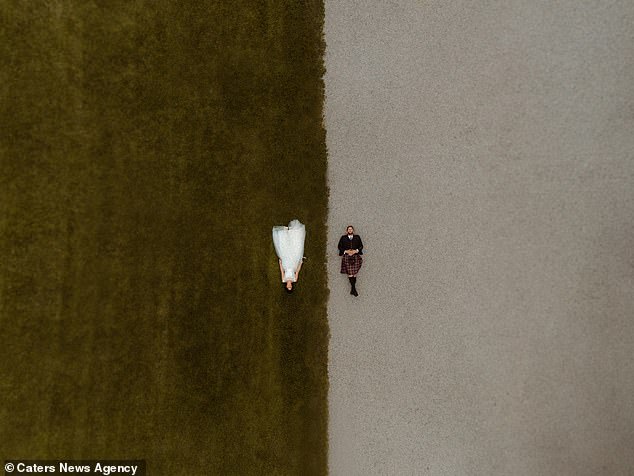 Bird’s-eye view: One Scottish couple decided to go for an aerial shot of themselves lying down in their wedding attire – and it has impressive results 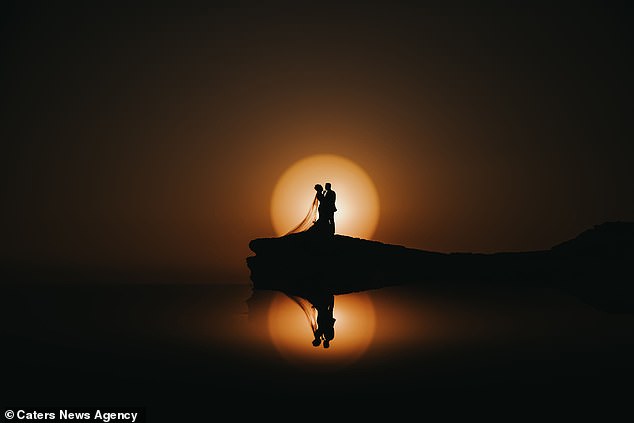 Glowing: The silhouette of this couple can be seen in front of a dreamy orange sunset as they stand on the edge of a rock and take in the stunning scenes 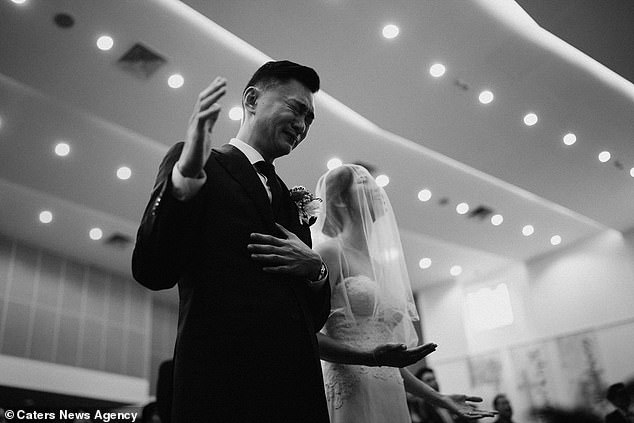 Pure passion: This animated picture shows a pair of newlyweds sharing a special moment as they exchange vowels during their ceremony 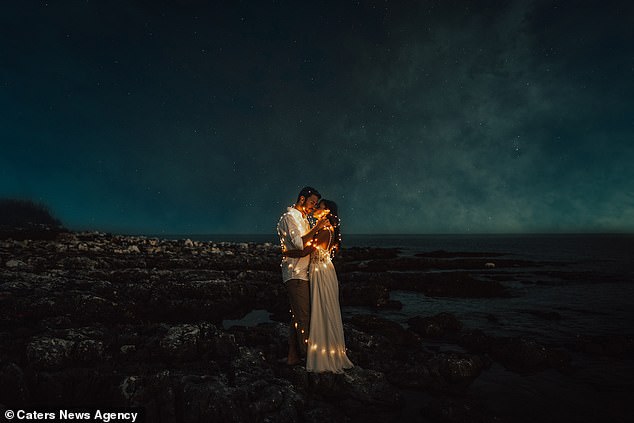 Light of her life: Cuddling each other before the night sky, this loved-up couple are wrapped in lights, representing their bright future together 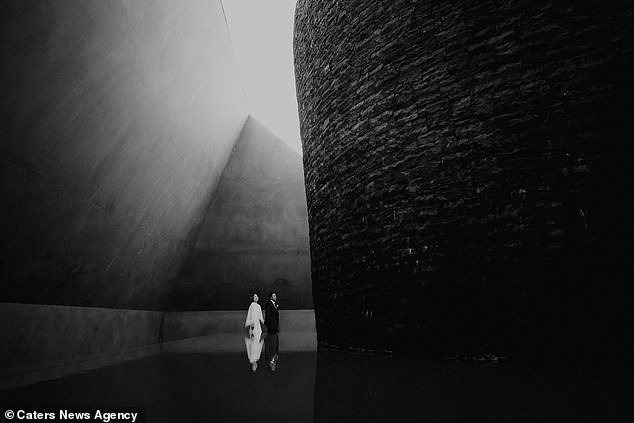 Black and white: Holding hands, this joyous couple gaze up at an impressive tall brick wall as another wall encloses them in from behind 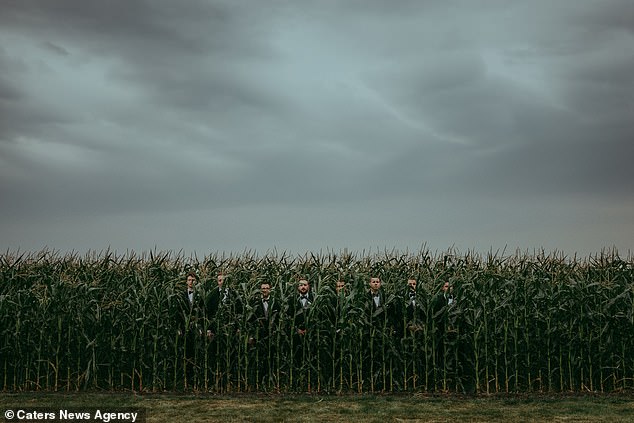 Corny: These smart groomsmen from the wedding ceremony hide in a cornfield, but it doesn’t stop this talented photographer from getting an arty shot