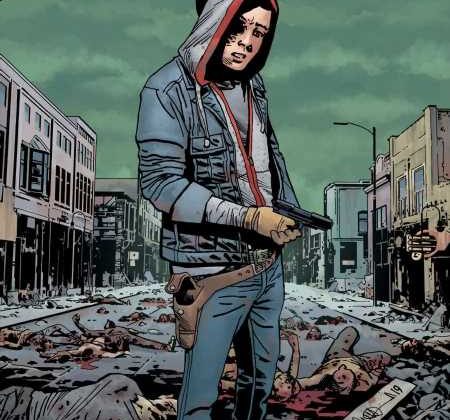 During an appearance at New York Comic Con last year, The Walking Dead comic creator and writer Robert Kirkman confirmed that he knew exactly how protagonist Rick Grimes was going to die in the printed version of the zombie franchise. At the time, he said Grimes’ demise “could happen next issue, could happen 10 years from now,” according to Comicbook.com. Kirkman, who is also an executive producer on the popular TV adaptation of The Walking Dead, added, “I could change my mind.”

Well, Kirkman didn’t change his mind, and it took him much less than a decade to end the torments and travails of the person who, up until now, has been the face of the comic. At the end of the previous issue, #191, Rick was shot in his bed by Sebastian, the son of the power-obsessed Pamela Milton, whom Grimes had effectively just removed as the leader of a large community known as the Commonwealth. EW can reveal that, in issue #192, Sebastian shoots Rick several more times, ultimately killing him, and then flees the scene. Later, after Rick has turned into a zombie, he is discovered by his son Carl, who is still alive in the comic book, and who shoots his undead father in the head.

Kirkman had previously hinted that issue #192 would be an important chapter in the Walking Dead saga. “It’s almost like this issue is… a big deal or something… #nocomment” he tweeted last month.

The Walking Dead #192 hits stores today. See the cover of the new issue above and a special variant cover, which will be available to purchase in July, below.