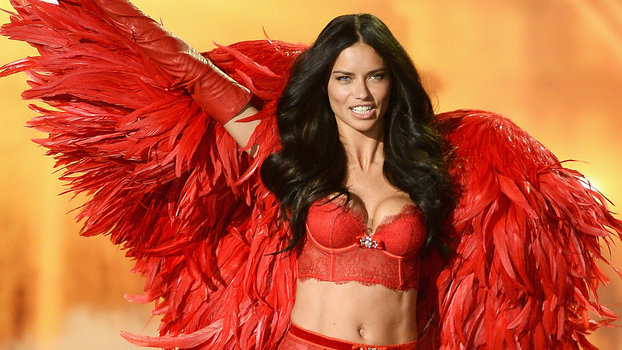 The Victoria’s Secret Fashion Show taped yesterday. This annual extravaganza, which will air December 2nd, always features the brand’s “Angels” as well as other models who walk the runway in underwear, high heels, and lots of additional flourishes like capes, hats, wings, feathers, and fringe. There are also performers. In the past the show has provided a stage for biggies like Harry Styles, Lady Gaga, and Rihanna; this year, the lineup included lesser-known names like Bebe Rexha and The Chainsmokers.

Victoria’s Secret hasn’t been doing so well of late (though, as The Guardian notes, it is still the number-one lingerie brand in the U.S.), and so what was interesting about this year’s show is how resolutely the company stuck to what used to work for it 10 or 20 years ago. The Angels were all toned and whippet thin, with six-packs that shone like the carapace of a beetle. A diamond-encrusted Fantasy Bra, which may or may not be worth its claimed million-dollar price tag, made its annual appearance. And Adriana Lima, Victoria’s Secret Angel since 1999, once again walked the runway (for the very last time).

But something about the entire spectacle felt…awkward. After all, 2018 was the year that Miss America decided to ditch the swimsuit portion of its competition, a mainstay of the pageant for almost a hundred years, bowing to “this cultural revolution.” It was the year HBO announced it wouldn’t film another sex scene without an intimacy coordinator on-hand making sure all talent was comfortable. Arguably, 2018 has been the year of female rage — but also, the year of the female candidate. And of course, it was the year of Dr. Christine Blasey Ford’s testimony at the Kavanaugh hearing, when, for many women, it also became the year of sharing their own stories of sexual assault. It felt like women spent 2018 being more aware of their bodies than ever before, but not necessarily in the look at my sexy abs way. What was with Victoria’s Secret’s reluctance to get with the times?

In an interview with Vogue, chief marketing officer of L Brands (Victoria’s Secret’s parent company) Ed Razek defended the show’s model casting and lack of size diversity, saying, “…part of what’s happened in our show is that the girls have just continued to get more physically fit. We don’t tell them to; they compete with one another and they work hard … They shouldn’t have to apologize for that.” No one is asking the models to apologize for that, but the question has been raised as to why the brand continues not to use its platform to show a wider range of beauty. “Everybody keeps talking about Rihanna’s show. If we had done Rihanna’s show, we would be accused of pandering without question,” Razek added.

RELATED: Every Single Look from the 2018 Victoria’s Secret Fashion Show

The Victoria’s Secret fashion show isn’t about selling bras, after all. It’s about selling a definition of sexy that has remained virtually unchanged since the first VS fashion show aired in 1995. What is (and by exclusion, what is not) sexy is the foundation of a brand that brought us the Bombshell Add 2 Cups Push-Up Bra and the strappy cheeky panty. The epitome of this narrowly defined sexiness is the show.

Victoria’s Secret’s market share has been challenged by the likes of Third Love, Aerie, and True&Co, all of which have featured a range of women and body types in their advertising — to critical acclaim and sales growth. No matter how much Victoria’s Secret digs in, it can no longer singularly define what a woman in lingerie should look like. If it didn’t get this memo in 2018, who knows what sort of audience will remain when it finally does.