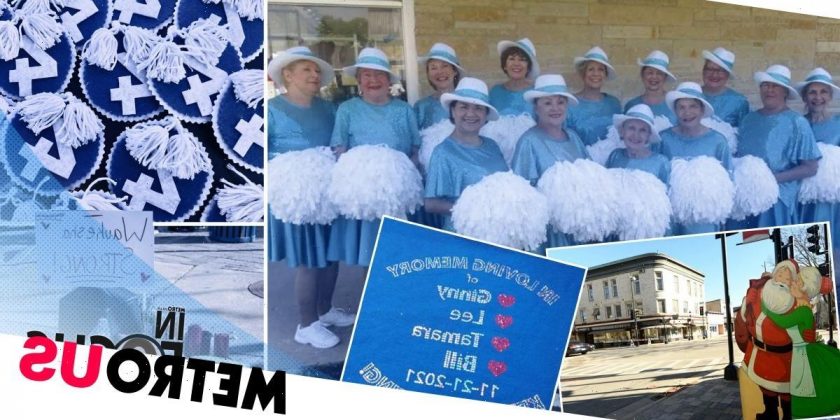 The blue sky turned pink as the sun set on happy revellers, cheering and whooping from the sidelines of the much-celebrated annual Christmas parade.

Roads had been closed for the event, and the atmosphere was one of joy as the people of the lakeside town wrapped up warmly to celebrate the coming holiday season for the first time after the previous year of Covid cancellations.

Fresh out of school, children looked on, clutching bags full of advent goodies, their backpacks swinging as they were entertained by a local troupe called the Milwaukee Dancing Grannies.

The women had dressed in blue and white for the occasion and waved white pompoms in the air. They wore cosy matching white hats and scarves as they entertained the crowd to the jubilant sound of the parading Waukesha South High School band.

Moments later the joyful scene was shattered by unthinkable violence.

At around 4.40pm, a red SUV broke through the parade barrier and barrelled along East Main Street towards the crowds. The car slammed into the back of the Dancing Grannies and the high school band, leaving scenes of devastation.

Witnesses reported a loud bang followed by sounds of screaming and crying.

Onlookers left their belongings and ran for cover, while others rushed to help. A police officer shot at the car in an effort to stop the vehicle.

Five people died that day and more than 60 were injured – many critically. Paramedics rushed the hurt to hospital, and a 39-year-old man was later arrested. A damaged red 4×4 was found nearby.

‘No one ever saw him coming,’ Dancing Granny Sharon Millard told the New York Post at the time. ‘He was going so fast.’ 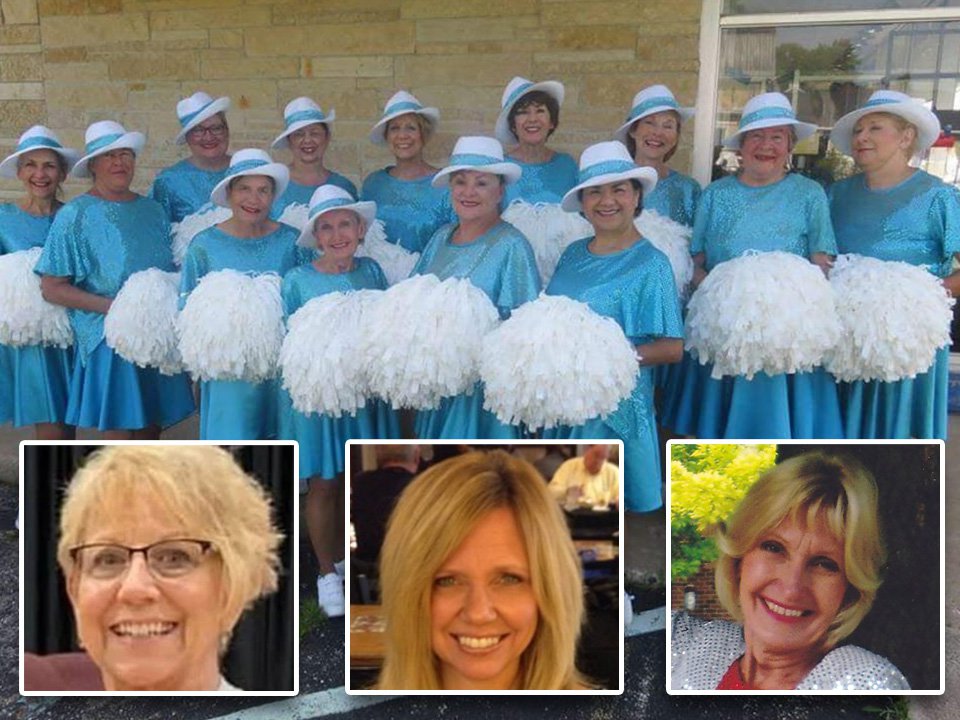 Four of the Milwaukee Dancing Grannies team lost their lives in the atrocity, including 79-year-old Virginia Sorenson, known affectionately as ‘Ginny’, who was the group’s founder and choreographer. The heart and soul of the troupe, she had a sparkling personality and was well-known and loved locally.

Dancing Granny LeAnna Owen, 71, was another fatally hit. She was a proud grandmother who cared deeply for her dance troupe friends and her rescued bulldogs. Just a few months before, she had told a CBS interview that the Grannies ‘all truly love each other. We’re like sisters’.

Former school teacher Tamara Durand, 52, was also killed. It was the first time she had performed with the Milwaukee Dancing Grannies, but she was well known to the community. In 2009 she made headlines after rescuing a man from drowning in the Wisconsin River.

And Wilhelm Hospel, 81, lost his life that day, too. His wife Lola was one of the Grannies and he volunteered with the group, keeping them rehydrated and ferrying them to and from the 25 parades they attended each year.

52-year-old Jane Kulich, a local bank teller, was fatally struck as she handed out sweets to children. Two days after the event, a sixth victim died – eight-year-old Jackson Sparks who had been marching with his baseball team. His 12-year-old brother Tucker was also hit.

The man accused of driving the car into the parade has pleaded not guilty to multiple criminal charges. Darrell Brooks Jr, 39, is facing 77 charges for the vehicular rampage. He will remain jailed on a $5million bail and a hearing is scheduled for March 11.

The day after the parade, the Milwaukee Dancing Grannies put a post on their Facebook page, which read: ‘Our group was doing what they loved, performing in front of crowds in a parade putting smiles on faces of all ages, filling them with joy and happiness. While performing the Grannies enjoyed hearing the crowds’ cheers and applause which certainly brought smiles to their faces and warmed their hearts.

‘Those who died were extremely passionate Grannies. Their eyes gleamed [with the] joy of being a Granny. They were the glue [that] held us together. Our hearts are heavy at this most difficult time.’

Dancing Granny Laura Thein was just feet away from the car. She told Fox6 News: ‘When I looked, all I saw were bodies in the street. It took me a couple of minutes to get my head together because I couldn’t believe what I was seeing.

‘But we are going to get through this. We are very strong women. And with the strength of each other, we will get through it.’

After such a horrific event, the Grannies could be forgiven for retiring from public life for good. They have all been traumatised by the collision, and two were badly injured. Many of them have been left needing counselling.

But just two weeks later, they appeared together at a parade in nearby Franklin. This time, they simply walked, carrying a banner with the names of their fallen friends; Lee, Tammy, Ginny and Bill. It also bore a broken heart.

Wearing white roses, white hats and white gloves, the Grannies walked arm in arm, wearing custom-made blue sweatshirts with their friends’ names on the back.

At the event, troupe member Sharon Millard told Fox6 News: ‘We are doing this for them. Because that is what they would want. They would be angry if we just didn’t do anything any more.’

Now, three months after the atrocity, the sisterhood has vowed to stay strong and dance on, keeping their friends’ legacy alive and spreading the message of love and positivity across America.

The Grannies told metro.co.uk that they will not discuss the what happened that day. They have moved on as best as they can, but are understandably struggling.

Dancing Granny Kathi Schmeling has had to become an unofficial spokesperson for the ladies since she joined the group last year. Her first parade was that fateful day in Waukesha. With so many of the Grannies in pain, she has taken on the role of supporting and helping her friends.

‘When I first started with the Grannies last summer, Ginny said to me: “I prayed for someone like you to join the group.”,’ recalls Kathi.

‘I want to be the strength this group needs right now. Some could not function or think about making decisions about the group. They were so devastated and sad. Our hearts were broken.

‘We are still struggling. But we will keep on dancing. That was Ginny’s quote. “Keep on Dancing”.

‘After the collision, at the parade site, the few of us left standing all looked at each other. Sharon looked at me and said, “What’s going to happen to the Grannies?”

‘I looked at her and said, “We’re going to keep on dancing.” That’s what Ginny would have wanted.’

As a way of coping with the trauma, the group have kept busy. They are now coaching around 25 new Grannies and are working hard perfecting their new St Patrick’s Day routines, which have never before been performed.

These are made all the more poignant as they were choreographed by Ginny, and the Grannies will honour her memory by performing it next month in downtown MiIwaukee.

As the founding member of the Grannies, Ginny went through personal hardship when she thought she would have to give up the troupe when she needed hip surgery.

Speaking to CBS last year, she said: ‘I love dancing. And now that I can’t with my surgery, it’s like I lost a best friend. But the Dancing Grannies had a place for me here doing the choreography and being an instructor. That’s a really important part of my life. Especially now that I can’t dance. I love it and I love the ladies. They’re my family. They are my friends.’

This thread of friendship runs deeply through the group, making their loss all the more hard to bear.

Talking to NBC three weeks after the event, Sharon Millard said: ‘I think what I would like is for everyone to remember how much joy they brought to everyone. How much they taught us to enjoy dancing, and being together, and being a family. I know we are going to continue going on. It might take us a year. To grow back and get some more people to join. But I know in our hearts of hearts we will continue.’

Kathi adds: ‘The only requirements to join are that you are a grandmother or older than 55. You must be able to mesh with the group, be positive and uplifting. And no drama.’

Just as they hold their shoulders high and watch their partners while they dance, the ladies have found these principles valuable as they recover from the events of the Christmas parade. They look out for each other, and keep moving, sharing the message of strength and love.

At their next march they will hand out bracelets bearing the words: ‘Granny Strong’.

They will also be wearing memorial patches that Kathi designed and handmade. In the same colours the Grannies were wearing on 21 November, the patches simply state the number 4, in honour of the four who died, and are adorned with two small white pompoms.

The injured have been welcomed back and are now using the dance practice as rehabilitation.

Tama’ra Rosentreter, the Dancing Grannies’ president, was severely injured when stuck by the car. She barely remembers anything from that day.

‘She is out of the wheelchair but still in a walking boot,’ Kathi explains. ‘She is not sure if she’ll be able to walk the St Patrick’s parade since her stamina is down.

‘Betty Streng was also severely injured but she is walking now and showed up at our last practice for the business meeting.’

Before the collision, the troupe would march to ‘We Are Family’, a tune that now means more than ever. Chapters have begun springing up across the USA in solidarity, with Dancing Grannies groups being established in Las Vegas, Nevada and elsewhere.

’Why are the Grannies such a special group to belong to? Yes, it is about exercise, but also about forming new friendships and acting as role models,’ says Kathi. ‘When we perform, we hear loud cheers from the crowds and see so many smiles and such enthusiasm. The crowds love dancing along, and that puts smiles on our faces and warms our hearts. We love to see the crowds erupt when they see us coming.

‘We are rebuilding, regrouping and focussing on the future. With community love and support we are coming back bigger and stronger, as we know this is what the fallen would want.’

Now, the troupe are looking to the future – and have ambitious plans.

Although their next parade will be held on Saturday 12 March in downtown Milwaukee, Ginny’s dream was to perform in the world’s largest parade – the Macy’s Thanksgiving Parade in New York City.

‘It was Ginny’s wish,’ explains Kathi. ‘But our group was never big enough. Maybe with this new group coming up the ranks we just might have a chance.’