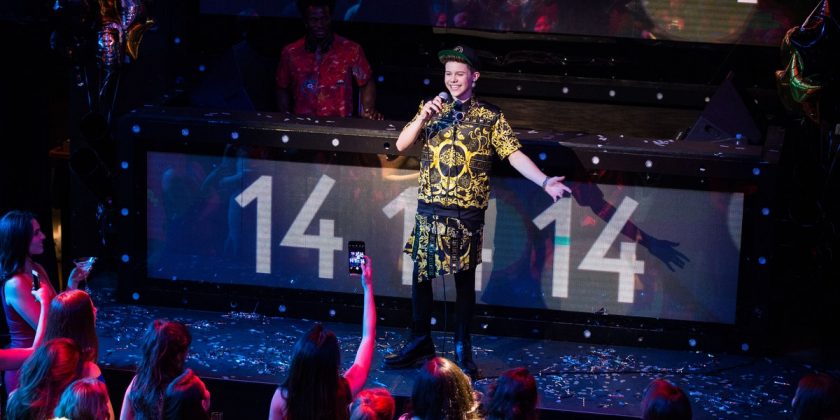 One look at the trailer for Comedy Central’s new series The Other Two and it’s easy to see why people have been quick to call it a parody of Justin Bieber’s rise to fame. The half-hour comedy is about two older siblings of a young tween who becomes a superstar after his homemade YouTube music video goes viral. He’s helped along by a manager named Streeter who will do anything to make sure that 13-year-old Chase Dreams (yes, that’s his stage name) remains relevant. But former SNL head writers and The Other Two creators Sarah Schneider and Chris Kelly want to make sure that you know their show isn’t 100 percent based on Justin Bieber and his manager Scooter Braun. It’s only kind of based on Justin Bieber and Scooter Braun, and the industry that created them in the first place.

"People keep asking us this," Schneider says with a laugh while speaking with Bustle and a few other journalists at MTV’s Los Angeles offices. "The name Streeter is actually taken from one of our friends who’s a writer at SNL, so that was actually completely unrelated. We just thought that his name sounded like this manager."

But it’s not all coincidence. While The Other Two (airing Thursdays at 10:30 p.m. on Comedy Central) follows Chase’s older siblings Brooke (Heléne Yorke) and Cary (Drew Tarver) as they try to both find success on their own in the shadow of their brother’s overnight fame as well as mooch off of his fame for their own benefit, there are scenes peppered into every episode that show just how far a manager will go to keep a young emerging pop star at the top of his game. One scene in particular in the first season finds Streeter (Ken Marino) having to cancel on Chase’s commitments because, in an attempt to "jack up" his body, he made the young kid eat a bunch of raw eggs. Unsurprisingly, Chase gets sick and has to take the day off to recover.

Schneider says the rumors that this happened when Justin Bieber hosted SNL are completely true. "When Justin hosted the show, Scooter Braun did come around and say that he couldn’t come to meetings today because he’d eaten a bunch of raw eggs because they were trying to get his body tight," Schneider reveals with a smile, while Kelly starts to laugh beside her (Bieber and Braun could not be reached for comment). "That is taken straight [from real life]."

But Schneider and Kelly promise again that Chase, who’s played by real TikTok phenom Case Walker, is not supposed to be a Justin Bieber parody. He’s actually just meant to represent any innocent kid who gets put into the Hollywood machine and forced to become someone totally unrecognizable all in the name of fame. In fact, what may come as the biggest shock while watching The Other Two is just how nice and sweet Chase is and how much you’ll feel bad for this kid that seemingly has it all. He’s not the image of a young, spoiled pop star people have come to expect.

"We wanted Chase to be likable," Schneider says. "The only idea from [Justin and Scooter] that we used for inspiration is the idea that there is an industry behind this kid that is creating him and molding him and he’s a f*ckboy now."

Kelly then rattles off examples of what Chase is forced to go through in Season 1. "Like binding his neck to keep it tight and dying his tongue," he says. "This idea [is] that this little kid is in a prison."

Schneider nods, then continues, "There’s an entire industry behind a kid that is making that kid into whatever the industry thinks the world wants. That’s always been interesting and sad and weird." 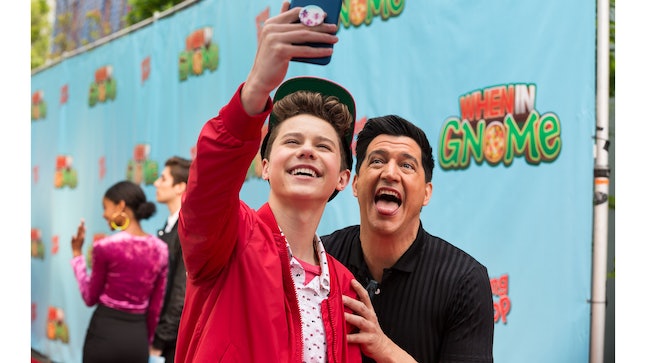 After years and years of rumors coming out about Bieber’s antics while hosting SNL, it’s fascinating to hear the two former head writers discuss his time there.

"You’ve heard the stories from SNL, like, ‘Oh, he was a bad host,’ or whatever," Kelly says. "But our brain was like, ‘Oh, so like older men are just telling you that you can’t eat today?’ That helped us to be like, Chase is not going to be a little sh*thead. You’re going to see throughout the course of the season that he’s just a sweet kid that is moved about by people and by the entertainment industry and you feel bad for him."

And since The Other Two never follows Chase and Streeter on their own, it’s always telling the stories of Brooke and Cary as they orbit around their little brother’s world. "You’re seeing Chase’s life through their eyes," Kelly says. "Through their eyes, he’s having a damn blast. But if you think about it, he absolutely is not having fun. Every episode has been terrible [for Chase] but no one’s thought about him. No one thought about what he’s thinking." 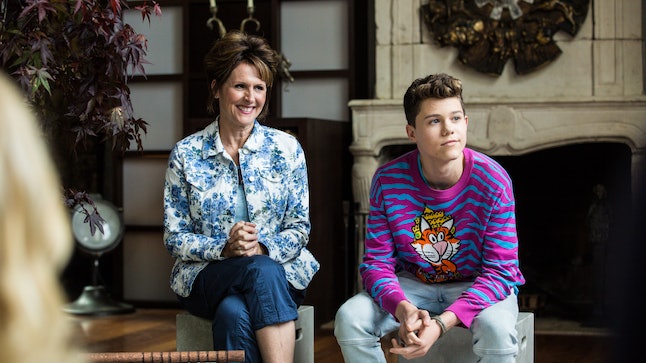 "We went down so many rabbit holes and looked at other teens and tweens who followed the same trajectory, a lot of kids who would start the same way," Kelly says. "Who would make one little music video their mom was filming and you watch their rise on their YouTube page. This was their first video, 10 videos later it’s a little nicer, I think a local manager has gotten involved and then a couple later you’re like, uh oh, now it’s sexy! You see the trajectory and you realize there’s a pattern to how these kids are groomed."

While Schneider remarks that the behind-the-scenes process of making a tween star is "actually impressive" and a real industry, Kelly adds that they "wanted to make fun of it and validate it."

A big part of that meant keeping all the characters as real as possible. That means Chase’s older siblings, even when they’re using their little brother’s fame for their own gain, aren’t villains. They also show their fierce love and loyalty to Chase in smaller, surprisingly emotional and sweet scenes as they protect him from adults who may not have his best interests at heart. There’s a lot of love between the siblings and their naively optimistic mother (played with incredible nuance by Molly Shannon), and that not only makes the show more complicated and interesting, but it keeps The Other Two from becoming mean-spirited.

"There’s so much more depth of story that we could tell [that way]," Schneider says. "It wasn’t them vs. him; it’s they’re a family and trying to keep it together and deal with this huge wrench that’s been thrown into their lives." 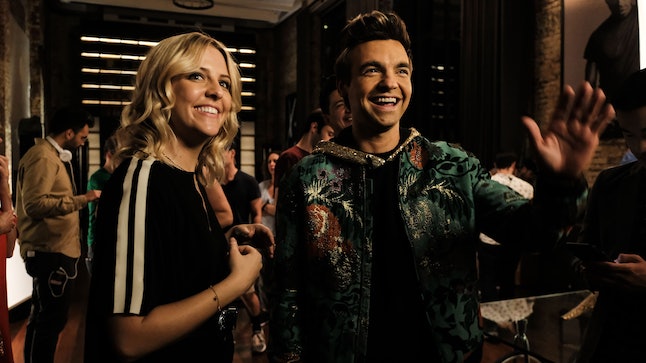 During production on Season 1, The Other Two creators discovered the weirdest coincidence: one of the stars actually lived through the exact premise of the show.

"Drew Tarver’s younger sister Katelyn is an incredible singer and got her start on American Juniors, which was like the young teen spinoff of American Idol," Kelly says. "Remember how on American Idol, sometimes the family would sit on the side of the stage for the final 10 like, ‘That’s our girl!’? He was that."

Tarver literally lived out Cary’s life, becoming known as "Katelyn’s brother" and hovering just on the fringes of becoming famous. "He would be on TV like, ‘She was good!’" Kelly says. "He got a little whiff of being the brother of a famous person. We wrote it and filmed it and would get into certain scenes and he would remind us like, ‘This is exactly what I did.’"

Schneider laughs, then adds, "Which is funny because we were trying to write a character that is truly relentlessly humiliated and he kept being like, ‘This reminds me of my life!’ That’s sad!"

But Tarver’s real-life experiences weren’t exactly the same as Cary’s. "He had said once that the main difference between Cary and himself is that on the show, Cary is resistant and hates that Chase is famous and Drew said he never had that," Kelly says with a laugh. "He was like, ‘Yeah, I’ll be on camera! I’ll do this!’"

And one more aspect of the show that was inspired by real-life may come as another shock: a running gag throughout the first season of The Other Two is that while working on furthering Chase’s career, the family stays in Justin Theroux’s New York bachelor pad, complete with a toilet shaped like a motorcycle, a giant photo of Theroux hanging in the living room, and a closet full of black motorcycle boots.

"We asked him and he thought it was funny and he let us do it," Kelly says of Theroux’s approval of their joke. "We wanted the most inappropriate house for a kid, like all metal and concrete."

"I remember we were trying to look up an article that he would have done that shows him posing in his house to see if we were even close to being on the right track," Schneider adds. "We found one and we were! He had like guns hung on the wall behind him in some picture where he’s wearing motorcycle boots. We were like, ‘Okay, this checks out!’"

No word yet on if Theroux has a motorcycle toilet, but Kelly hopes that the actor will be inspired by The Other Two to get one for himself. Who knows, maybe that could become the next trend for famous people. Crazier things have happened.