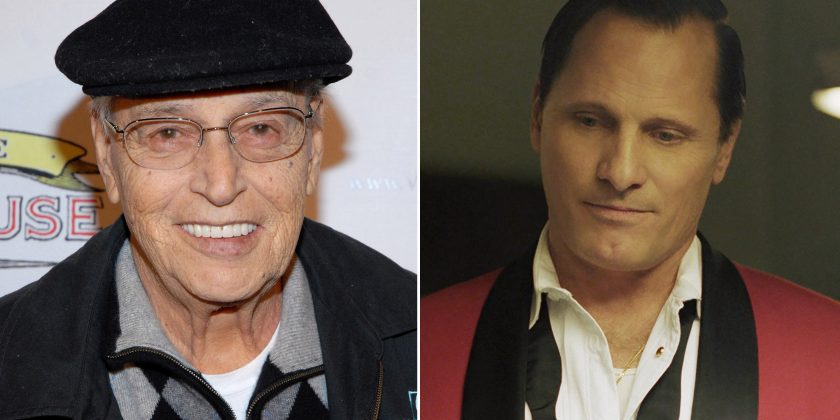 One night in the early 1960s at the Copacabana nightclub, Frank Sinatra made a ruckus at the coat check when an attendant couldn’t find his beloved fedora. Ol’ Blue Eyes had requested it be treated with the utmost care, but it got lost anyway. Furious, Sinatra threatened to never return to the famous music venue on East 60th Street and left in a huff.

A big, broad and well-liked guy, Lip searched for — and found — the misplaced hat in the coat room, left the club and returned the headwear to its grateful owner. Sinatra tipped him $100.

That memorable encounter is re-enacted in the new movie “Green Book” (Sinatra’s name is left out), a drama about a 1962 road trip through the segregated South by Lip, an Italian from The Bronx, and Donald ley, a black pianist. But that’s just a small glimpse into the fascinating life of Lip, who died in 2013 at the age of 82.

The man was a living New York folk tale: a Lindy Hop competitive dancer, a garbageman, an almost-pro bowler, a minor-league baseball player, a hairdresser for The Rockettes, a veteran of the Korean War, a close pal to singer Bobby Darin, a hot-dog-eating contest winner and an actor who played Carmine Lupertazzi on “The Sopranos” when he was in his 70s.

“If somebody asked him what it was like to become famous so late in life,” Lip’s youngest son, “Green Book” writer Nick Vallelonga, told The Post. “He’d say, ‘Honey, I was famous before I was famous.’ ”

Lip was born Frank Anthony Vallelonga on July 30, 1930, in Beaver Falls, Pa. Lip’s parents had moved to the United States from Italy that same year to find work and planned to stay with relatives in Beaver Falls for a few months before heading to New York City. His mother, Nazzerena, was pregnant with him during the journey.

“Everybody asked him, ‘Were you born in Italy?’ ” Frank Vallelonga Jr., Lip’s eldest son and owner of Tony Lip’s Italian Restaurant in Franklin Lakes, NJ, told The Post. “Well, two weeks earlier he could’ve been.”

Several months later, the Vallelongas arrived at what would become their decades-long home on 215th Street in The Bronx, then a largely Italian neighborhood. Lip’s father, Nicholas, founded a grocery store and — unthinkable to New Yorkers today — a farm, complete with chickens.

They also had friendly neighbors: The Gottis, who had 13 kids. Lip forged a childhood friendship with John Gotti, who was 10 years younger and later became the notorious boss of the Gambino crime family.

“When the Gottis were growing up, they had practically nothing,” said Lip’s brother Rudy Vallelonga, who plays his own dad in “Green Book.” “People in the neighborhood used to give the kids clothes to warm them up.”

When Lip was about 8 years old, he acquired his colorful nickname.

For Lip, bulls- -tting wasn’t lying — it was a way of life. He saw it as an ability to talk other people into doing things, a special skill that would prove an asset as a nightclub bouncer and actor.

“I always told him, ‘I wish I had your gift of gab,’ ” said Rudy. “He could talk people into anything.”

Lip received only a ninth-grade education. At 16, he was drafted by the St. Louis Browns and left home to play in the minor leagues. During a game, Lip was on third base and saw the shadow of a familiar figure approaching. “It was his father,” said Nick. “He grabbed him, took him by the ear right off the field and back to The Bronx.”

In the ’50s, he served in the Army during the Korean War. Upon his return to New York, he took advantage of the GI Bill and went to school to learn a trade — hairdressing — and began cutting the locks of the Radio City Rockettes.

Eventually, he became the bouncer at the Monterey Club in The Bronx, later moving to the Wagon Wheel — “a real bust-up-type joint, lots of shots and beers and sailors and soldiers and hookers,” said Frank Jr. — and the famed Peppermint Lounge, both on West 45th Street.

But Lip’s most starry memories were made at the old Copacabana, where he worked for 12 years as bouncer and eventually maitre d’ until it closed in 1972. The club was hot during the ’60s, when a long line regularly formed outside the door. Unless you were a star or Mafioso, it helped if you knew somebody on the inside — like Lip. There, he became friends with Sinatra, Dean Martin, Nat King Cole and other celebrities. Sometimes, he was on Tom Jones duty.

“My father actually used to sit onstage to catch girls that would jump from the balcony,” said Nick. “Get girls who would rush the stage, to pull ’em off Tom Jones. To pick up the bras and panties they were throwing onstage. It was crazy.”

The work hours were long. Typically, Lip would wake up not long before his shift began and come home as late as 8 a.m., after enjoying a few drinks with Sinatra at the singer’s favorite bar, Jilly’s on West 52nd Street.

“I never saw my father wear anything but a tuxedo for the first five or six years of my life,” said Nick. “I thought he was a movie star.”

One night in 1970, he became one. On that fateful evening, Francis Ford Coppola walked into the Copa with several casting people of his upcoming Mafia film. “He saw [Lip], and said, ‘You gotta be in this movie,’ ” said Nick. “They picked him, and then they said, ‘You have kids? We need kids for the film.’ ” Lip and his sons, Nick and Frank Jr., who also appears in “Green Book” as his Uncle Rudy, all acted in the opening wedding scene of “The Godfather.”

Lip, who had relocated his family to Paramus, NJ, became the go-to guy to play gangsters and cops on screen after the Copa closed. Although he held odd jobs — running hotels and a pizzeria for a while — acting became his main gig. He appeared in many of the most well-known and acclaimed mobster movies of all time in small character roles: “The Pope of Greenwich Village,” “Goodfellas,” “Donnie Brasco” and many more.

His friends say the untrained performer was a natural.

“That all came from the Copacabana before he became an actor,” Lip’s friend, actor Danny Aiello, once told the Bergen Record.

His big break came before Season 3 of HBO’s hit drama series “The Sopranos.” Lip’s wife of 41 years, Dolores, had recently died, and he was in a funk. During that time, Lip was repeatedly called in to test for what would be his best-known role.

“What do I care about this show ‘The Sopranos?’ ” he told Nick. “I don’t even watch it, and your mother’s not here to see it. I’ve done it all. I don’t need to do anything else.”

But his sons convinced Lip that their mother would’ve wanted him to get out of the house, and he became Lupertazzi crime boss Carmine. The character was supposed to be in only two episodes.

“We walked into Little Italy, and he was like one of The Beatles,” said Nick. “At Yankee Stadium, he had armed guards take him to his seat.”

Nick has worked for decades as an actor, writer, director and producer in Hollywood, but the one story he always wanted to tell was about his dad’s time driving Shirley on a concert tour during the early ’60s. Known around the city for his ability to win a fight, Lip took the job at the pianist’s request during a renovation closure at the Copa. And over a year and a half on the road, he acquired a lifetime of stories.

Only Lip’s family and friends knew about the trip, and they helped Nick, who was just 5 years old at the time, put together the screenplay. That includes Shirley, who died in 2013 and requested the film not be released during his lifetime. Lip gave input, too, and told Nick to portray him how he actually was — at times racially offensive, if not hateful — and how much he grew during the journey.

“He said to me tell the exact truth because it’s important,” said Nick. “And show how he changed by being with Dr. Shirley.”

Ever the showman, Lip also knew that his life story would make a damn good picture. In “Green Book,” he’s played by Viggo Mortensen.

“My father would say, ‘Of course it’s good. It’s about me,’ ” Nick said. “They should’ve been making movies about me a long time ago.”