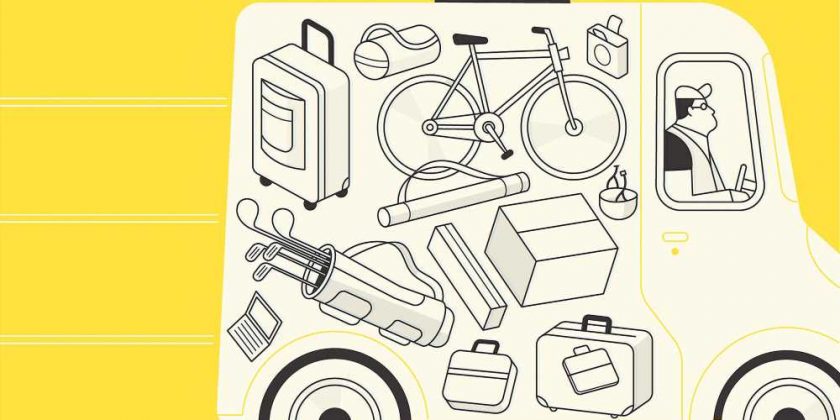 Danielle Candela drew the line at the Picasso in the gilt frame. “It wasn’t wrapped or anything — I didn’t want the liability.”

But the founder of Tote Taxi has shuttled almost everything else you can imagine between New York and the Hamptons — including luggage, golf clubs, strollers, soil and even the occasional giant unicorn. The East Quogue-raised 29-year-old came up with the idea for her startup while working in sales for a media company in the city but heading home to her family on the East End every weekend.

“I wished I could hire someone to pick my bag up from my doorman in the morning, so it would be there by the time I got off the bus on Friday evening,” she recalls. “The service didn’t exist, so I created it.”

Tote Taxi (think of it as Postmates for the 1 percent) debuted last summer and quickly became a hit with well-heeled Hamptonites. Candela initially invested in a Mercedes-Benz Sprinter van that she drove herself. “I spent 10 years living in Manhattan, when I wasn’t driving on a regular basis, but it was a matter of pride. I wanted to learn the business,” she explains.

Since then, her fleet has grown to six drivers, while Tote Taxi now offers luggage delivery from the city to LGA, JFK or EWR, so there’s no need to schlep that heavy bag to the airport any longer.

As for East End weekenders, the service typically collects gear from homes and offices in the city on Thursday, Friday and Saturday mornings, with a reverse pickup in the Hamptons on Sundays and Mondays.

Ferrying fees begin at $39 per bag, but far more unusual requests have poured in. Aside from the precious Picasso, Candela once collected a unicorn pool float from a doorman building on the Upper East Side. (Bizarrely, it was already inflated.) Then there was the family who packed up its essentials for a monthlong rental, including strollers, toys and clothes, and asked her to handle the mini-move. When fashion blogger Arielle Charnas of Something Navy was shooting out in Montauk, Tote Taxi delivered all the posh products needed by the influencer and her models.

The company operates year-round, but over the winter, Candela reverses her commute, bringing items from the Hamptons back into the city: a rug, perhaps, or flowers from a farm. She even delivered a batch of custom soil for Frank Trentacoste of Bhumi Farms in East Hampton, who was managing a rooftop garden in the city for Spring Place, the exclusive Tribeca members’ club. “He’s very particular about the soil he uses for his vegetables,” she laughs.

Candela has partnered with several Hamptons-focused businesses, including helicopter service Blade. Given its strict luggage weight limit, Tote Taxi has become an ideal add-on for anyone keen to bring multiple outfits (and pool floats) for a weekend out East. Just leave that Picasso at home.