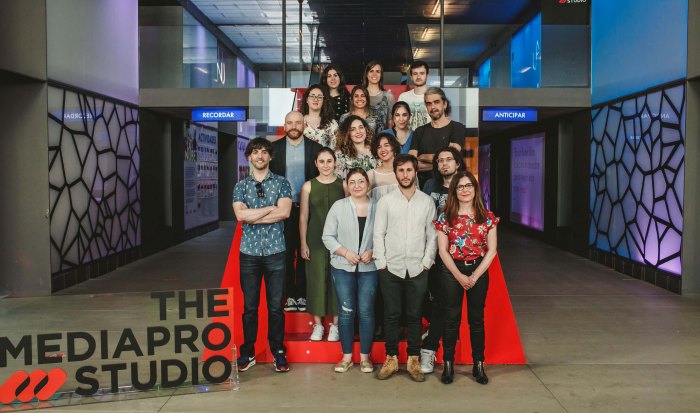 Madrid-based production hub The Mediapro Studio has announced finalized details of an arrangement with Madrid’s Complutense University (UCM) and the National Film and Television School of London (NFTS) on a new Master’s program designed to develop new screenwriting talent.

Mediapro general director Juan Ruiz de Gauna, UCM dean of information sciences Jorge Clemente and Irene Ortega, who will fill the role of director for the new program, made the announcement at Madrid’s Matadero, an early 20th century slaughterhouse now converted into an arts center, where the course will be taught.

Classes will prepare the students – as many as 25 – for the realities of the current audiovisual industry, while preparing them for a long-term career. The course will provide students the opportunity to get involved with current Mediapro creators and their already in-production series from around the world. Involvement also comes with a guaranteed internship within The Mediapro Studio.

International workshops will be held between participating institutions to facilitate the creation of projects intended for the international market. Backed by the NFTS’ renowned screenwriting programs, the projects will be conceived as potential international co-productions. Professors from both UCM and NFTS will oversee the workshops.

The 35-week course culminates with the awarding of the Master’s degree, endorsed by UCM’s school of Information Sciences.

Mediapro has been an increasingly major player in the domestic and international TV market since its inception 25 years ago. In March the rights broking-services-production company unveiled The Mediapro Studio – a massive production house based in Fuencarral, northern Madrid – and confirmed 34 series currently in production under the new label.

With the new Master’s program, The Mediapro Group hopes to have found a long-term structural answer to the era’s greatest challenge: Accessing extraordinary writing talent.

“We are in a wonderful moment of creation, and we need to ensure the strengthening and consolidated of talent,” said Gauna, who was heavily involved in launching a young generation of filmmakers in the’90s such as Julio Medem.

“We need new blood, young or old, but above all people who want to work, who want to develop their talent.”

Rodríguez added, “We are in a moment of global revolution. Everything now is globalized and our clients work in a multi-territorial way. The program’s students will have incredible access to see what is happening in the industry around the world.”

The first year of the program will only be available in Madrid, but plans are already in place to expand the classes to a campus in Barcelona for the 2020-21 academic year.

After the presentation, a panel of experts hosted a roundtable titled “We Look for Talent,” where the importance of the script in the different areas of production was analyzed. The panel included filmmaker Fernando León de Aranoa, showrunners Diego San José and Iván Escobar; Luis San Narciso, artistic director of The Mediapro Studio; Javier Méndez, global director of content of the Mediapro Group; Javier Pons, responsible for TV at The Mediapro Studio; Cristina López, director of “Las que faltaban”, and Jorge Clemente, dean of the Faculty of Information Sciences of the UCM and co-director of the Master.