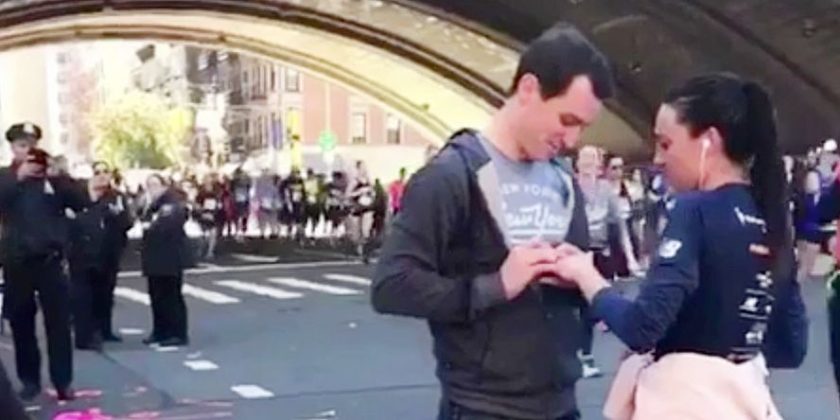 Picture this: You’re running your first ever marathon through the streets of New York City. You’ve been training for this for over a year. You’re exhausted, sweaty, and surrounded by people, including over 50,000 fellow runners and countless spectators.

At mile 16, you see your boyfriend and excitedly run over to say hello. It is at that precise moment that he hops the barrier, gets down on one knee, and proposes to you. In the middle of the marathon.

That’s what happened to Kaitlyn Curran when her now-fiancé Dennis Galvin popped the question this weekend. The video, which CBS Evening News obtained, has started to go viral.

SHE SAID YES: A woman who was running in Sunday’s New York City Marathon was at mile 16 when her longtime boyfriend hopped over the barrier and dropped to one knee. She ended the day with a medal around her neck and a ring on her finger. https://t.co/8xbZ6P24RM pic.twitter.com/YizdEJYOhc

As these things tend to go, the internet is fiercely divided on whether this proposal is the absolute best or the absolute worst. Allow them to explain:

OMG, I am STEAMING about the guy who proposed to his GF at mile 16 of her FIRST NYC marathon. What the actual fuck? What a shitty ass thing to do! She worked hard for that shit, and he made it about him. *growls*

“My girlfriend is running the Marathon…..how can I make this about me?” https://t.co/5RBwDgtmJv

Guy Watching His Girlfriend Run Marathon Quietly Finds A Way To Make It All About Him https://t.co/hGuP4nmxiD

MILE 16 IS NOT THE FINISH

proposals mid race cannot be a thing no no no nopic.twitter.com/tgPhncGxzQ

this guy clearly needs better friends because not a single one of them told him NOT TO FUCKING DO THIS https://t.co/l8pNfbptZA

This guy interrupted his girlfriend’s marathon to propose. I would have been mad if @pablohidalgo had interrupted me while eating a sandwich. https://t.co/e5OcVw8Lm4

If you’ve ever trained for a marathon, the amount of time that goes into, is a lot. To be interrupted for a damn proposal is insane. https://t.co/bW6ocBqwuQ

On a day when there’s so much discord, I’m glad we all agree that marathon proposal guy fucking sucks

Seeing all of Twitter pile on the NYC marathon proposal guy gives me faith in America.

marathon proposal dude thought he was being all cute now the internet is ruining his life wow life comes at u fast :\

In total fairness, the people of Twitter don’t know whether Kaitlyn loved this proposal or not. She said yes, and she did look super happy as she kept running. It’s totally possible that this is exactly what she wanted and Dennis killed it and they will live happily ever after.

HOWEVER, for any future mans planning on proposing to their ladies, maybe think twice before doing something that could potentially go viral and get you roasted on the webz. Good luck to you!