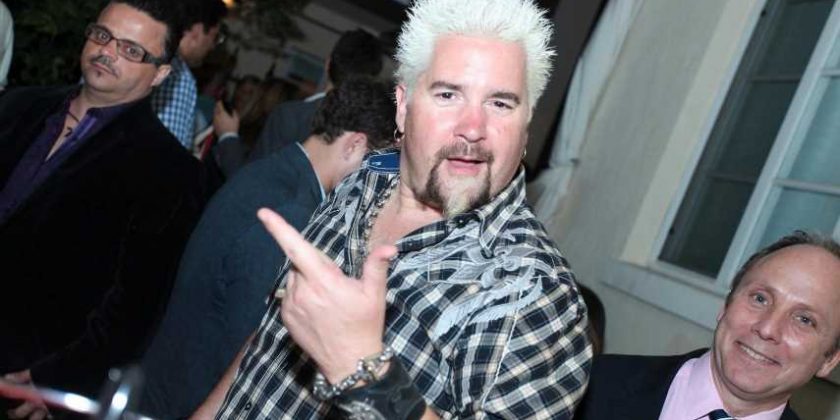 Guy Fieri is a well known American author, TV personality, game show host and restaurateur. He currently has a net worth of $50 million. Fieri is best known for being the old time host of the TV show Diners, Drive-Ins, and Dives on The Food Network. He also landed his own show Guy’s Grocery Games after appearance on the second season of the show Next Food Network Star. After his successful participation on the show, he had gone to host numerous shows on the network.

Over the course of his career, Fieri had a lot of haters and irritated a lot of the viewers and restaurant critics. However there is no doubt that Fieri is here to stay and he seriously can bring in huge profit to the network which is why he was offered millions of raise in salary. Some people might not like him but it does not change the fact that the hate is bringing him loads of wealth.

Early Life And The Start Of His Food Career

Guy Ramsay Fieri was born on January 22, 1968 in Ohio. Though he was born in Columbus, he was raised in the rural area of Northern California in Ferndale, in Humboldt County. Their family operated a successful Western style clothing store in Ferndale. While growing up, he discovered his passion and interest towards food when he had a stint in France as a high school student for the study abroad program which is where his imagination to the sumptuous possibility of food has expanded. He might have discovered his interest in food in high school, but his history with food started way earlier than that. When his young self had earned extra money from manning Awesome Pretzel cart on the roadside, which he did enjoyed doing. Right after he graduated from the University of Nevada, he got his first job on the restaurant at the Parker’s Lighthouse. It was an eatery by the Long Beach that hired him as a manager.

With his ability and skills, he quickly found a knack in the business and soon became the manager of six branches of Louise’s Trattoria restaurant. Soon after becoming a manager, he decided to just open restaurant of his own. Together with Steve Gruber, they opened a shop in 1996 located at Santa Rosa, California. The food place is called Johnny Garlic’s which later on expanded and different franchise are established in across California.

The business is still handled personally by Fieri even after his success on finding stardom on the Food Network in the year 2000s. Fieri did not waste any moment, using his celebrity status, he opened a restaurant called Guy’s American Kitchen and Bar located in New York City. With his success on TV and on his businesses, the public might have been attached to him because of his personal brand. Though he had a setback in 2017 after his restaurant closed following a review from Pete Wells of The New York Times, it did not stop him to where he is now.

With his new found success on his restaurants such as Guy’s Burger Joint on the Carnival cruise ship, Guy Fieri’s Baltimore Kitchen & Bar at the Horseshoe Casino in Baltimore and Guy Fieri’s Vegas Kitchen and Bar in Las Vegas, he started venturing on different food businesses even more. A year after his restaurant closed, he opened Chicken Guy! at the Disney Springs in Orlando, Florida. The said restaurant was built in collaboration with Robert Earl of the Planet Hollywood.

Becoming The Highest-Paid Chef in the World

His big break came after he had appeared and won on season two of the show Next Food Network Star. After the successful appearance on the show, he was given a chance to lead his own show called Guy’s Big Bite. The show which premiered in June 2016 which ran for 13 seasons with 190 episodes and he was initially paid $1,000 per episode. Of course his TV career did not stop there. His humorous personality and loud fashion sense made him seem a natural fit for stardom. With a very competitive food shows these days and different release of food related programs, he has proven that he is here to stay.

READ NEXT: The Green Spice: How Alan Wong Became The Richest Celebrity Chef In The World