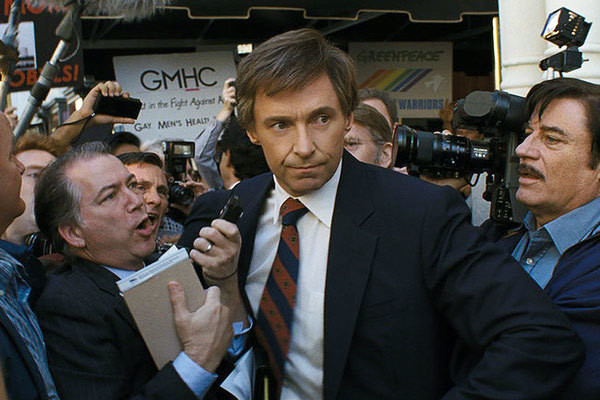 Once upon a time, an extramarital affair was enough to destroy a presidential candidate. Imagine that. The Front Runner, which tells the true story of Colorado senator Gary Hart’s fall from grace in 1987, is the direct result of Donald Trump bafflingly attaining the highest office in the land in 2016. Like Blackkklansman also did this year, The Front Runner attempts to make sense of it all. How did an accused sexual harasser like Trump win? And, more to the point, when did the media become TMZ? Unfortunately, we already know the answers. Politics are really no different from tabloid fodder now. And it mostly started with Gary Hart, his story is undeniably relevant.

Based on All the Truth Is Out: The Week Politics Went Tabloid by Matt Bai, The Front Runner isn’t exactly objective. As you can probably guess from the title, the book is more an indictment of the media than Hart, and director Jason Reitman’s film follows suit. Enter Hugh Jackman. The growling actor makes himself small as Hart. And he gives a down-to-earth performance, not a showy one. Jackman is easy to root for, which is why he’s here. And thus we come to the moral paradox of the film. Hart is meant to be a sympathetic figure, but only compared to people like Trump or Anthony Weiner. He’s still a lying cheat. Doesn’t Hart deserve some of the blame? Reitman and Bai, who co-wrote the screenplay, don’t think so. They’re more interested in the genesis of today’s political paparazzi — the detestable politirazzi. The Front Runner begins like many political films and the period setting makes the movie feel like Network or The Candidate with Robert Altman’s flair for crowd-surfing conversations. Reitman knows his stuff and, if nothing else, the film is imminently watchable. Hart (Jackman) jousts with his handlers (J.K. Simmons, always a welcome sight in dialogue-driven films, plays Bill Dixon) but much of the focus is on the reporters. Alfred Molina appears as Ben Bradlee as the Washington Post ponders Hart’s chances. But the most telling sequence involves Miami Herald reporter Tom Fiedler (Steve Zissis), who gets so pissed about a colleague landing an exclusive interview with Hart, he stakes the candidate out amidst rumors of infidelity. A personal grudge makes a reporter Hart’s enemy. The Front Runner unfolds over the final weeks of Hart’s bid for the Democratic nomination in 1987. He’s dogged as a womanizer and doesn’t help his case by brazenly inviting the press to follow him around. This leads to Fielder’s stake-out which, in turn leads to a damaging story that speculates about Hart having an affair with Donna Rice (Sara Paxton). And that’s all it takes. The court of public opinion is all that really matters and the press make their living off the public’s thirst for scandal. The press are wolves in The Front Runner, and portrayed as masters of Hart’s fate in many ways. A scene near the end where Fiedler can hurt Hart by helping himself predictably goes against the candidate. He’s a public figure and is thus subjected to trial by speculation.

Reitman is correct to skewer the press and judge their intentions. America is unabashedly shallow when it comes to the news. But can we blame them for doing what’s essentially in their best interests. In the days of JFK, reporters buried stories about his infidelities and protected their candidate, later President. Heads were turned. When did that change? Maybe with Hart, who reporters saw less as a person and more a mealticket. The media is not innocent. And Hart isn’t either. But the real perpetrators are the American public. If we were more intellectual, more obsessed with policy than scandal, Trump never would’ve had a chance.