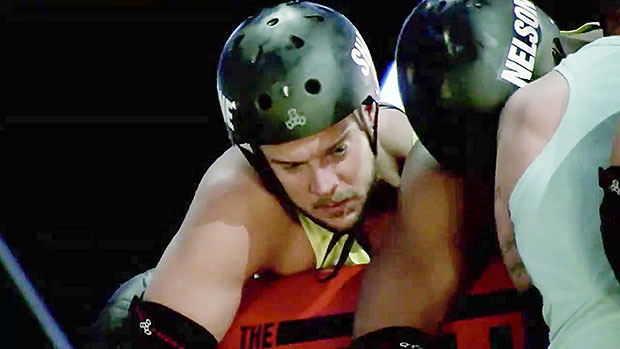 After feuding all season Shane/Nelson and Johnny Bananas/Tony go head to-head in on the Nov. 6 episode of ‘The Challenge: Final Reckoning.’ Here’s a full recap of what went down!

The Nov. 6 episode of The Challenge: Final Reckoning picks up back at the Redemption House, with Kayleigh confronting Nelsonabout the rumor that he got cozy with Natalie, which was started by Johnny Bananas. Nelson denies the accusations, but Bananas stands strong with his claims. Finally, Nelson is able to get some one-on-one time with his girl, convinces her that nothing happened, and all is forgiven. They may not get much more time together, though, because it’s time for another Double Cross!

TJ Lavin lets the four teams in the Redemption House know that he has room for TWO teams back in the Main House. That means that all the teams will get a chance to play for their spot back in the game. However, whoever chooses the Double Cross still gets a slight advantage, as they’ll get to pick their opponent, leaving the remaining two teams to fight it out. This time, it’s Brad and Kyle who make the right pick, and at Armageddon, they reveal they want to go against Kam and Kayleigh. That means rival teams, Bananas/Tony and Nelson/Shane are going head-to-head in the battle we’ve all been waiting for!

For their game, Brad/Kyle and Kam/Kayleigh have to climb to the top of a wall using 16 pegs. But, there’s a catch, as they have to choose the right pegs to add up to the number 32. Brad and Kyle finish first, but it’s a no-go, as their math was wrong. That leaves room for Kam and Kayleigh, who methodically did their math before putting the pegs into the wall, to pull out the W!

Things are more physical for Bananas/Tony and Shane/Nelson, as their elimination requires both players to hold onto the end of a pole and try to push the other team out of a designated ring — best of five wins. It ends up being a pretty easy victory for Tony and Bananas, who get their three wins right in a row, earning their spot back in the house. Oh, and since Redemption House is no more, that means Brad/Kyle and Shane/Nelson are out for good!

At the next challenge, the teams have to push a giant boulder across a lengthy field, while also navigating it through some difficult terrain. It’s a purge challenge, too, which means the pair that loses is automatically getting eliminated, and the team that wins gets an advantage at the next challenge. Joss and Sylvia pull out the win — their first of the game — and it comes down to Cara Maria and Marie vs. Kam and Kayleigh at the end. Unfortunately for Kam and Kayleigh, they just can’t keep up, but they do hold their heads high and finish the challenge without quitting.