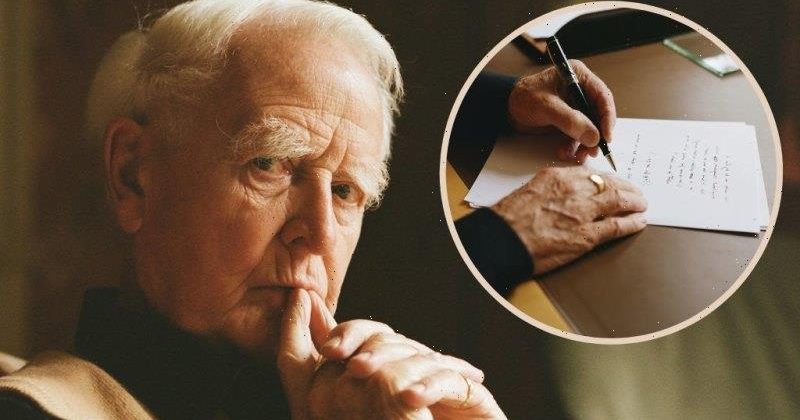 John le Carre was at the very least a great trashmeister and there are those who would say the man born David Cornwell was a lot more. Graham Greene said that The Spy Who Came in From the Cold was the best spy novel ever written, and Philip Roth said A Perfect Spy, the le Carre novel about his conman father and his untrustworthy self, was “the best English novel since the war”.

His father, Ronnie Cornwell, was the kind of man who paid school fees with dud cheques while inviting Bradman’s Australian cricket team to dinner. Le Carre wrote to his brother: “Our father in my memory is disgusting … I never mourned him, never missed him … I rejoiced at his death. Is that so awful?” And he was almost as boggled by his mother: “How you walk out on two sons in the middle of the night, then take the high moral ground” was beyond him. 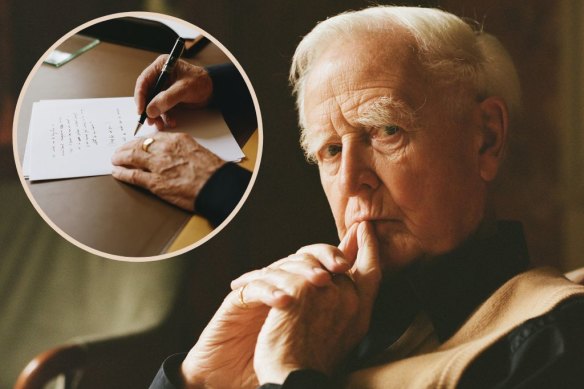 The book of John le Carre’s letters builds up a picture of a master spirit. Inset: le Carre writing at his desk in 2019.Credit:Charlotte Hadden/The New York Times

He said, again to his brother: “We were frozen children and we’ll always remain so.” He said the “chip of ice” Graham Greene thought was necessary for creation was frosted all over the Cornwell boys as if they were doomed to be poor players full of histrionic self-fabrication. He writes to Nicholas Shakespeare of Greene: “The General is dead and he won his war if not all his battles … A very large man with all sorts of fascinating smallnesses … A lot of them were diligently tended … to keep the child alive in him.”

He also told the young Shakespeare he was more important than Greene, however, because he was talented and young and alive and he made him a proposition: “Here’s the deal: Let’s never have a professional relationship again. You’ll never interview me or write about me while I’m alive. I’ll keep some sort of safehouse for you if you need one.” This man who shunned the world as a kind of humiliating mirror would let a young writer live on his property. 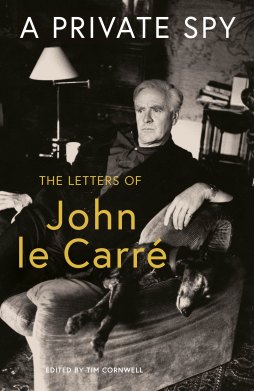 A Private Spy: The Letters of John le Carre.

Le Carre seems genuinely to have loathed the publicity that he was so brilliantly adept at just as he felt great pain and bitterness at the way his work could resist him. “Then,” this is to his brother, a fellow writer, “the work doesn’t care about you. It would prefer to be spoken to by someone more talented.”

But he had a horror of having to rehearse the controversies he’d strutted and fretted through. He abhorred Salman Rushdie’s stance over the Satanic Verses fatwa: “How can a man whose novel, for whatever twisted reasons, has already been the cause of so much bloodshed insist on risking more?” He also clashed with Greene about that master defector Kim Philby and said he could absolutely not see him, though he confessed later to Philippe Sands: “I must have been a fool. I think it would have been quite extraordinary to have spent a few days with Philby.”

He also attacked Tina Brown in her New Yorker editing days for publishing “one of the ugliest pieces of partisan journalism that I have witnessed”. This was in defence of the biography of Rupert Murdoch by William Shawcross in appal at Brown not confessing that she was married to Murdoch’s former editor and antagonist Harold Evans. Le Carre writes of “the easy anti-Murdoch hysteria of the dreadful British press”.

He can be lovely, though, on actors. He tells Alec Guinness, of whom he could do a wonderful impersonation, “Smiley is marvellous … Immense range, yet all within the difficult bounds of the character: heart, humour, occasional sweeping fury. It’s amazing and I’m sure will be hailed as one of your great parts.” Le Carre knew as soon as he watched Guinness that the character had been reshaped by the great actor. He said of him: “His voice was so beguiling … that it’s printed into my head as The One.”

And about the TV adaptation of The Night Manager – unlike The Spy Who Came in From the Cold and Tinker, Tailor, Soldier, Spy it is not only superior to the books in articulation but better plotted – he writes to Hugh Laurie, “As to the art of it: Jesus, Laurie, breathtaking … it has to be the performance of a lifetime.”

When Tom Stoppard worked on the Fred Schepisi film of The Russia House, the perestroika novel, they became friends. Le Carre writes to him: “I loved Shakespeare in Love and loved you for writing it. It’s one of those perfect profound light works of art that actually increases the public’s awareness of its own cultural heritage.”

There’s also a sketch of his secret service days, and he says to the British literary translator Stanley Mitchell: “Well, I did betray our friendship but at least there was something to betray.” He adds, “Judas was not a shit because he betrayed Christ but because he loved him.”

This book does not have the breakneck glitter of Adam Sisman’s biography or the competitive irresistibility of le Carre’s anthology of life stories, The Pigeon Tunnel. But it does, step by step and strut by strut, build up a picture of a master spirit.

As a writer who is sometimes guilty of the equivalent of overacting, le Carre comes across as a vastly talented man who tried to achieve a form of truth.

This carefully put together book by his son who died only a few months ago shows him running away from school, studying in Bern, teaching at Eton, and having a wild time with James Kennaway and his wife that issues into the one non-thriller, The Naive and Sentimental Lover. It’s full of false steps and flash steps but the overall effect is blindingly impressive.

A Private Spy: The Letters of John le Carre, edited by Tom Cornwell, is published by Viking, $39.99.

In case you missed it: the culture stories that start conversations