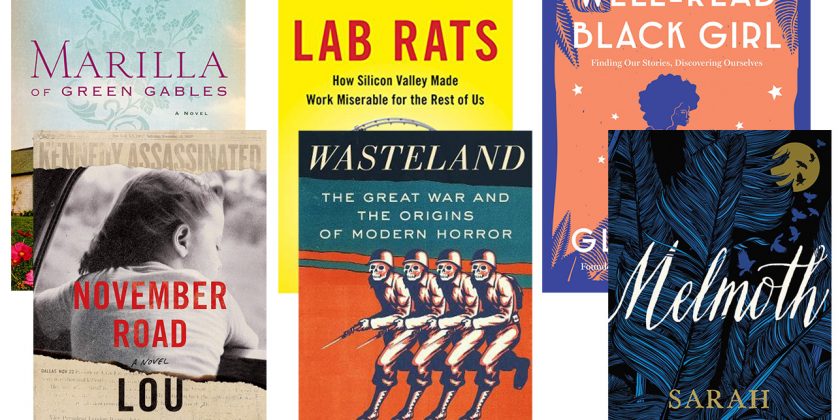 Marilla of Green Gables
Sarah McCoy (fiction, William Morrow)
The title needs no explanation to fans of the original series by L.M. Montgomery; “Marilla” tells the tale of Avonlea before Anne, where the death of her mother means that farm girl Marilla Cuthbert must suddenly take on all the responsibilities of being a farm wife.

Lab Rats: How Silicon Valley Made Work Miserable for the Rest of Us
Dan Lyons (workplace, Hachette)
A new laugh-out-loud/cry-out-loud title from the author of “Disrupted,” Lyons warms to his topic: exploring the ways in which Silicon Valley made workplace culture toxic across the country, from expecting insane hours to Lego training workshops.

November Road
Lou Berney (fiction, William Morrow)
It’s 1963, and Frank Guidry is an obedient foot soldier to Carlos Marcello, New Orleans mob boss. But Guidry knows too much about the JFK assassination and in the days that follow, people with ties to Marcello are turning up dead. He decides it’s time to hit the road and see if he can make himself disappear.

Wasteland: The Great War and the Origins of Modern Horror
W. Scott Poole (nonfiction, Counterpoint)
World War I was the most devastating event humanity had experienced, leaving millions shaken long after the conflict itself ended. New art forms were created as a way to process what had just happened — including the modern horror flick. Nosferatu, Frankenstein’s monster and the wolfman all can be traced to the aftermath of that war.

Melmoth
Sarah Perry (fiction, Custom House)
In the much-anticipated follow-up to “The Essex Serpent,” Helen Franklin is living in Prague, working as a translator. But when her friend Karel disappears shortly after discovering a mysterious letter that warns of “Melmoth the Witness,” Helen knows she is being watched.