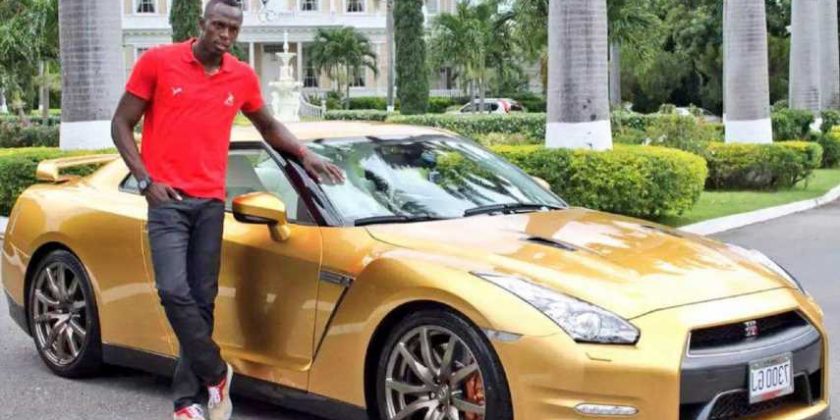 Usain St. Leo Bolt, is a retired sprinter hailing from Jamaica. He holds several records in 100 meters, 200 meters, and relay races along with several Olympic gold medals to his name. The eleven-time World Champion and eight-time Olympic gold medalist who owns a $2 million penthouse has earned a lot of money to push his net worth to around $90 million in 2022. Just like he loves to be the fastest man on the track the same applies to him when it comes to cars. Usain Bolt, the Jamaican sprinter was one of the highest paid athletes in the world when active.

Bolt published a memoir, My Story: 9:58: The World’s Fastest Man (written with Shaun Custis), in 2010. It was expanded and reissued as The Fastest Man Alive: The True Story of Usain Bolt in 2012. He loves fast cars and his immense net worth of $90 million is more than enough for him to own several of them. Below is the list of the fastest man’s finest and fastest car collection:

RELATED: The 958 Magic: How Usain Bolt Became The Fastest Man On Earth

Usain Bolt reportedly paid almost $285,000. Given that the MSRP of a 2017 Wrangler Unlimited was $42,945, it is clear that he has lavished significant cash on customizing. In addition, his Jeep has 22-inch forged alloy wheels and a 3-inch full fox suspension setup. The exterior is painted a bespoke matte black, while the interior has leather upholstery with a Jamaican flag color scheme.

Usain Bolt received the navy blue 2008 BMW M3 vehicle as a present from his sponsor Puma. At that time, the full-fledged M vehicle had a sticker price of $56,500. Sadly, he crashed the car after only a few weeks of ownership, but only suffered minor injuries. A few years later, on his way home from a party, he crashed the automobile once more.

As a result, his M3 crashed twice in a short period of time, demonstrating how the youthful athlete was unable to handle BMW’s high-performance M vehicle.

Nissan signed Usain Bolt in 2012 after he won one of many gold medals to market the GT-R, a high-performance sports car. Three gold-colored GT-Rs were produced for the corporation, one of which was sold at auction with the money going to Bolt’s charity. While the third is in Japan, the second was given to him.

Given that the GT-R was a limited edition model, its exact cost is unknown; however, a standard GT-R with comparable specifications from the 2012 model year had an MSRP of $149,990.

Usain Bolt bought himself a silver California car from the Italian luxury sports car manufacturer Ferrari in 2009 after breaking the 100- and 200-meter sprint records. The first vehicle he bought with his own money was a Ferrari, which is thought to be worth $196,450. His sponsor gave him a BMW M3 as his very first vehicle. Usain Bolt’s Ferrari California is powered by a 4.2-liter, naturally aspirated V8 engine.

Bolt’s passion for Ferrari, as previously noted, is unmatched, and the F430 is yet another Ferrari he has in his garage. By coincidence, the F430 came before the 458 Italia. Ferrari withdrew this model in 2009 after it was introduced at the 2004 Paris Motor Show. In 2009, the base price for the F430 Spider was expected to be $244,343. A 4.3-liter V8 engine with naturally aspirated fuel is included with the Ferrari F430 Spider.

Ferrari’s V8 engine has a 6 gear automated transmission and produces 490 horsepower and 343 lb-ft of torque. According to Ferrari’s performance statistics, the F430 Challenge can reach a high speed of 198 MPH and accelerate from 0 to 62 MPH in just 3.0 seconds.

Similar to the F430 Spider above, Usain Bolt also received a yellow-colored Ferrari 458 Italia. He was given the Ferrari for a week so he could drive the Ferrari 599 GTB around the renowned Fiorano Circuit. The sprinter first accompanied Ferrari test driver Dario Benuzzi in the backseat before taking the wheel and pushing the dazzling yellow Ferrari to its limits.

The most recent and the second priciest car to be added to Usain Bolt’s garage is a black Rolls-Royce Cullinan. He’s not the only celebrity who adores Cullinan, even Khloe Kardashian owns a Rolls-Royce Cullinan among her massive car collection. There are many places in Jamaica where one may travel in a suitable SUV to enjoy the terrain, and he specifically purchased a bespoke Jeep Wrangler for that use.

He realized the benefits of an SUV thanks to the Jeep, so the sprinter bought one of the quickest and most opulent SUVs available right away. Rolls-Royce Cullinan has an estimated value of $348,500, entered his collection.

With an estimated cost of $460,000 up to $650, 000 for the Platino model, the fanciest car in Bolt’s Garage happens to be a Rolls-Royce Phantom II. This model replaced the New Phantom in 1929, was the third and final model in the company’s 40/50 hp lineup. It made use of an upgraded Phantom I engine in a brand-new chassis. With a shorter wheelbase and stiffer springs, the “Continental” version was available.

READ NEXT: Why the World Loves Usain Bolt