Senior government figures are denying a split between the Liberals and Nationals over climate change, with Prime Minister Scott Morrison insisting the commitment to reaching net zero emissions by 2050 is not up for negotiation.

But former Nationals minister Matt Canavan doubled down on the position he aired on Tuesday that net zero “is all sort of dead”, saying other countries weren’t on track to reach that position. 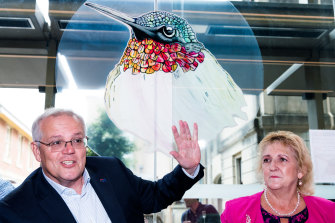 He said on Wednesday his view shouldn’t be a surprise to anyone.

“My assessment, for what it’s worth, is the rest of the world is doing nothing to go towards net-zero emissions. What country in the world is doing anything? If net zero is alive and kicking, show me where countries are doing that,” Canavan told Nine.

Morrison says everybody knows Canavan doesn’t support the government’s position so his comments shouldn’t come as a surprise.

“That debate has been done in the Coalition and it’s resolved and our policy is set out very clearly,” he said from Rockhampton in central Queensland.

“Of course, there were some who disagreed with it at the time – and I suspect they still will – but that doesn’t change the government’s policy.”

Treasurer Josh Frydenberg – who as the energy minister under Turnbull drew up some of the many doomed iterations of the Coalition’s emissions reduction policy – insisted the net zero commitment was one “that is clear, that is firm and that is non-negotiable”.

McCormack said that ultimately his party agreed to the net zero pledge and as far as he’s concerned, that means they are sticking with it.

“Once you give somebody a pledge that you’re going to do it, you have to stick by it. That’s what country people do. That’s what they’re renowned for.”

Labor frontbencher Murray Watt has accused the Liberals and Nationals of being in “open warfare” over climate policy.

“After apparently putting this war to bed over the last few months, it’s erupted,” he told ABC TV.

Morrison labelled Labor’s plans to use the existing safeguards mechanism to reduce emissions from the nation’s largest polluters a “sneaky carbon tax”.

Frydenberg talked about the Coalition’s technology investment road map, contrasting with what he dismissed as “literally the vibe of the thing … just a slogan and a billboard” from Labor.

The Morrison government’s plan states that up to 15 per cent of mooted emissions reductions will come from “further technology breakthroughs”.

“After nearly 10 years in office, they still don’t get it, they’re still arguing over the basics, over the fundamentals,” he told Radio National.

The MP repeatedly pointed out that Labor works closely with business groups to develop its climate policy and it’s based on many of the same assumptions that underpin the government’s plans.

That includes the assumption of a $24-a-tonne price for offsets and the use of the same list of 215 largest emitters, including 60 coal mines.

Those facilities would work with the Clean Energy Regulator on a case-by-case basis to work out what’s possible in terms of emissions reductions with the technology available, Bowen said.

“This is not something we are requiring these facilities to do overnight,” he said.

The safeguards mechanism Labor plans to use to ratchet down emission levels is exactly the one designed by the current government.

“They haven’t implemented it properly. … but the architecture is quite sound.”