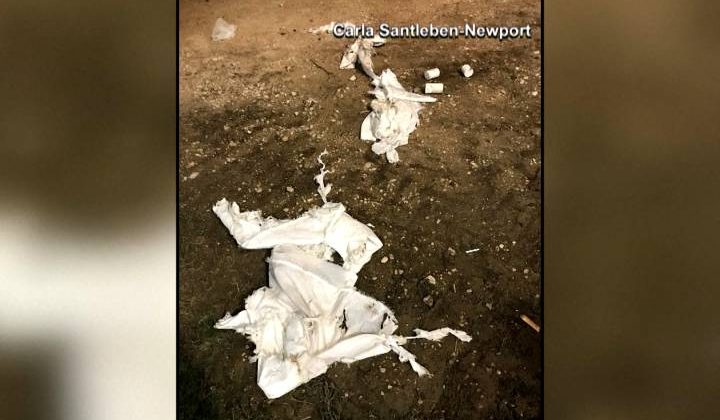 When people get divorced, many just go their separate ways and try to forget, but one Texas woman decided to finalize this moment in her life with a bang — by blowing up her wedding dress.

Kimberly Santleben-Stiteler had finalized the end of her 14 years of marriage on Friday in Medina County and told the Fort Worth Star-Telegram, she wanted to put the past behind her.

“I wanted to remove all things from our marriage from our house,” the 43-year-old said. “Photos in the attic, ring in the safe [but probably was going to sell it] and the dress I wanted to burn.”

She said she had been getting plenty of ideas on how to make the past go up in smoke, including donating the dress for “premature babies and baptism gowns,” but she felt it wasn’t enough.

To Santleben-Stiteler, the “dress represented a lie,” so instead, she decided to hold a divorce party to burn the dress.

That’s where her father and brother-in-law took the “burn the dress” idea to another level by suggesting it become an exploding target.

This past Saturday, she put her target practice to good use at the party held at her father’s farm in Lacoste, Texas. Approximately 40 guests attended and cheered her on as she held up a scoped rifle, pulled the trigger and an explosion lit up the sky about 182 metres, or 200 yards, away. She hit the target on the first shot.

An explosion of fire lights up the night sky on Saturday, Nov. 10, 2018, in Texas after explosives tied to a wedding dress were set off.

The explosion was a result of the dress being rigged with US$200 worth of Tannerite, the explosive component often used for rifle targets, which when shot, produce a large bang and puff of smoke.

The 43-year-old did hone her shooting skills ahead of the party, however, as the Star-Telegram reports her family was unsure firing from 100 yards away would be safe enough.

“We have a friend who is a bomb tech, and he kept saying, ‘That’s really a lot,’ like five different times when we told him our plan, so we had to back it up,” Carla Santleben-Newport, Kimberly’s sister, said.

As a result of the explosion, the family ended up with more than a few texts and Facebook messages to respond to.

Santleben-Newport said they were getting messages from around the county, asking if it was their explosion that people were hearing. Some could feel and hear it from at least 24 kilometres away.

Once the explosion and fire subsided, the family checked and found the dress was burning brightly and later, after it was removed from the container it was sitting in, was in tatters.

Kimberly Santleben-Stiteler’s wedding dress burns after she shot a target causing explosives to go off.

The tattered remains of Kimberly Santleben-Stiteler’s wedding dress after it was blown up using Tannerite.

Santleben-Stiteler said the shot was “liberating.”

“On the one hand, it was like being on set of some action movie. The explosion was huge,” she told the Star-Telegram. “It was liberating pulling that trigger. It was closure for all of us.”