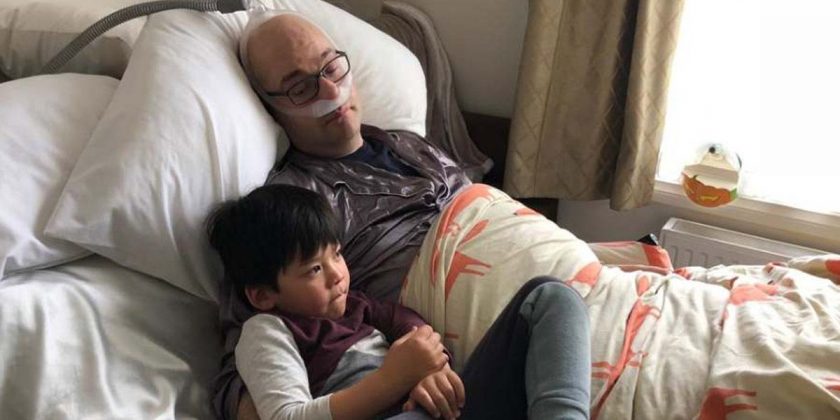 A dad shared a devastating goodbye message on Facebook hours before his death, bidding farewell to friends and asking them to share good memories with his son.

Ian Davis, a 40-year-old doctor from Melbourne, has become well-known in Australia for his fundraising since his diagnosis with motor neurone disease seven years ago.

But to his little boy, Archie, he was just a dad.

The day before Ian’s death, Archie hopped up on his bed for a cuddle. It would be their final moment together.

Ian posted a photograph to his social media page sharing this most heart-wrenching goodbye.

Knowing his time was coming to an end, he wrote: "Today I say farewell.

"Thank you everyone for all the support, love and compassion over the years during my fight. It has been some ride.

"I will leave this broken body with a full heart. Please tell my boy I love him and I’m so proud to be his dad.

"This photo taken yesterday is our final moment together."

He also appealed for friends to send memories to an e-mail address set up for Archie so he could hear about his dad when he’s older.

Five hours later, an update was posted on Ian’s profile informing followers that he had died peacefully, surrounded by family and friends.

"Have a beer for him, it’s what he would have wanted," it concluded.

Ian was diagnosed with MND, a progressive disease involving degeneration of the motor neurons and wasting of the muscles, in 2011 at the age of just 33.

He launched the campaign Fight MND, which has raised more than $40million in just four years to help doctors and researchers combat the disease.

A fundraising page he set up for his family, entitled ‘Help put me in the ground’, has raised more than $124,000.

Days after his death, his wife Melissa Yang shared a picture of the couple together.

She thanked well-wishers for their messages and said she and Archie had "come through the last few days blanketed by love."

"He was a force of nature, swept me off my feet and took me on the ride of my life," she wrote.

"It’s been wild. No one knew how to have fun quite like Ian, and we had a lot of it.

"I was privileged to be by his side in this life, and he has passed into the next.

"Determined, courageous, generous beyond measure, the most clever person I have ever known, with a will of steel and a heart capable of expansive love."

Ian’s medical background helped him to provide Fight MND with knowledge and expertise in medical science, which in turn helped the campaign to achieve positive progress in the quest for a cure.

“Ian’s dedication to the fight against MND continued until his final days ensuring in his absence the same rigour will be applied to the pursuit of the most promising research.

“All the people affected by the disease, be they patients, families, carers and researchers, have a great deal to thank Ian for.”

In his final post, Ian encouraged people to help his fight after hi death by making a donation in his honour to Fight MD.

If you wish to donate, you can do so here.