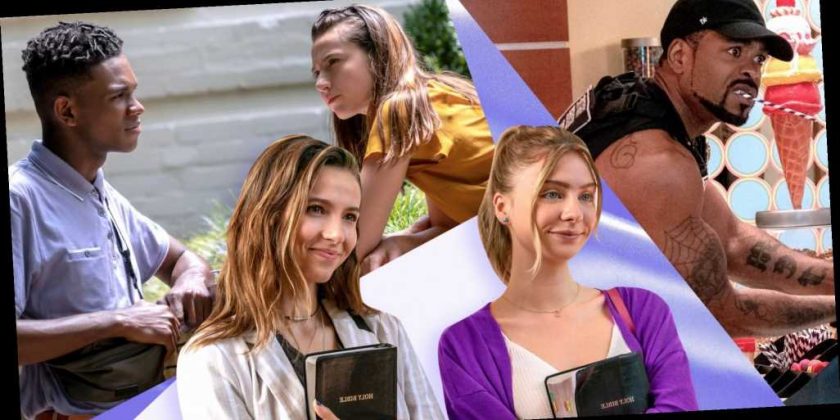 The bar is high when it comes to Netflix’s 2020 original series. Cheer! Tiger King! Never Have I Ever! And, yes, our quarantine-addled minds may not be the best at determining quality right now — I’m sorry, but how else could Eurovision have been deemed “fresh”? Still, when I came across Teenage Bounty Hunters, it took some mental cajoling to press play. From the title alone I was expecting something, well, dumb. And no, Teenage Bounty Hunters isn’t exactly “prestige” programming, but it’s one of the first shows I’ve watched in the past few months that I was willing to push my very strict self-enforced weekday quarantine bedtime for (eyes closed by 12:00 a.m. — NO EXCEPTIONS).

The show (originally titled Slutty Teenage Bounty Hunters, because everything is horrible) stars Maddie Phillips and Anjelica Bette Fellini as the titular teens, twin sisters Sterling and Blair Wesley, respectively. Both Wesleys attend a private Christian school in Atlanta. Outwardly pious good girl Sterling is her conservative parents’ dream (or so they think), while Blair is the token wild child envelope-pusher. Mind you, “wild” in this context is voicing support for a woman who cuts the heads off Confederate statues during lunch with the grandparents. And though they are doing unmistakably grown-up things (e.g. bounty hunting), the fast-talking, curfew-dodging Blair and Sterling never seem a day over 16. That’s not to say they aren’t mature — it takes a certain time-management skill level to balance relationships, school, and bounty hunting — but the crises of faith and community they face feel so stripped down and authentically teenaged, hold the indie soundtrack and brooding stares. All this to say, the show has mastered something few of its teen-geared counterparts have: It doesn’t take itself too seriously.

While Blair and Sterling are certainly at the core of the series, it’s a group effort, not unlike the quirky community dynamic present in fast-talking primetime predecessor Gilmore Girls. If Rory ever explored her sexuality beyond dating someone who doesn’t get along with her mom, or showed an interest in organized religion, the tonal similarities would be hard to ignore. Blair and Sterling’s proverbial village includes their boss, Bowser (Kadeem Hardison), a cynical ex-cop reluctant to admit his obvious parental instinct toward the twins (not a backward baseball cap in sight, but a Luke Danes comparison wouldn’t be entirely off-base). We also have Blair and Sterling’s parents, sunny but secretive Southern belle Debby (Virginia Williams) and endearingly blunt Anderson (Mackenzie Astin); and a memorable cast of teen characters including Sterling’s devoted (and lovably clueless) boyfriend Luke (Spencer House) and Christian queen bee April (Devon Hales). Is it the right time for a show about bounty hunting? Probably not. Teenage Bounty Hunters doesn’t quite touch on prison reform or police abolition, but it’s hardly an advertisement for law enforcement either. Truthfully, the show isn’t about bounty hunting at all. The teens’ side hustle is a convenient plot device for hijinks galore, but it’s really just a show about witty high schoolers figuring shit out.

When you tell people you’re watching a show called Teenage Bounty Hunters, they will lose any respect they previously had for your taste in television, and when you attempt to shorten the title in conversation (or writing) you will find that you are either calling it TBH and people think you’re confiding to them about your interest in bounty hunting, or Hunters (the name of a very different show). All that aside, I maintain that the series is worth a binge — and, God willing, a title change.