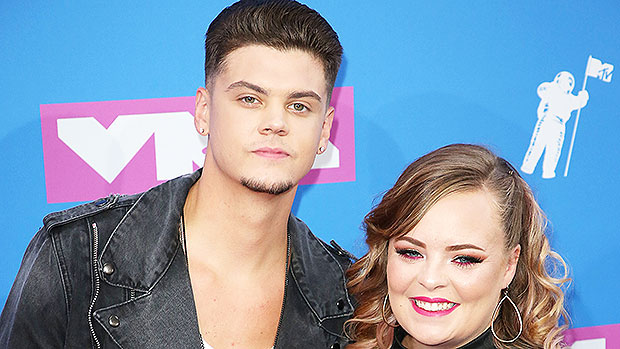 Even though Tyler Baltierra told Catelynn Lowell he wouldn’t cheat on her during their separation, he’s admitting he wishes he had more sexual experiences with other women.

Ouch! Despite telling wife Catelynn Lowell that he wouldn’t cheat on her during their trial separation, Tyler Baltierra admits in upcoming Dec. 3 episode of Teen Mom OG that he wishes he had more experiences with other women. In a preview clip, the 26-year-old has a sit-down with his dad Butch who asks him “You not being with any other women besides her, does that play any role in your…” before Tyler interjects to say “I’ve only been with one other one,” with bitterness in his voice. CLICK HERE TO SEE THE CLIP.

“You’ve only been with two women, you’re 27 years old. Does that play a factor with your…do you think about that?” his dad asks. “Do you think about, ‘Man, I wish I would have been with more women?’” Tyler immediately snaps back “Yeah!” with a look of longing on his face. Uh oh! Cate’s not going to be happy when she sees this. “The thing about it is I want Cate when we were like 20, 21, 19…everything was like, I don’t know dude,” he tells his pop.

Butch reassures him, “I feel that you’re doing everything you possible can to save your marriage or keep your marriage or rekindle it,” and Tyler responds “I’m trying to, like, figure out how I can be supportive to Cate without being destructive to me.” He also discusses how once their new house is finished the couple will begin their trial separation.

Tyler reveals that Cate is already in her second trimester with her pregnancy and his dad asks him if the couple was trying to  conceive. The 26-year-old shot back an emphatic ”F—k no!” Uh oh!  “I’m not gonna bring no f—king innocent kid into this s—t,” The continues. “Does this stop or hinder what process we’re doing? No. So yeah, just because the baby’s here, just because you’re pregnant, that does not mean that anything is gonna change.”

Tyler is determined that the separation is going to happen no matter what. “This new house is going to be done cause once that happens we’re going to do our trial separation and we’re going to live separate. It’s kind of a big thing.” Catelynn has already made her worries about Tyler cheating on her known to the Teen Mom OG audience.  In the Nov. 26 episode, she told a producer “I texted him and asked him is there somebody else. He’s like, ‘What the f—k? Do you think I would cheat on you?’ No, but it was so blindsiding. The separation thing is going to be hard but it’ll be good for me so I can focus on me and Nova,” she said referring to the couple’s three-year-old daughter.